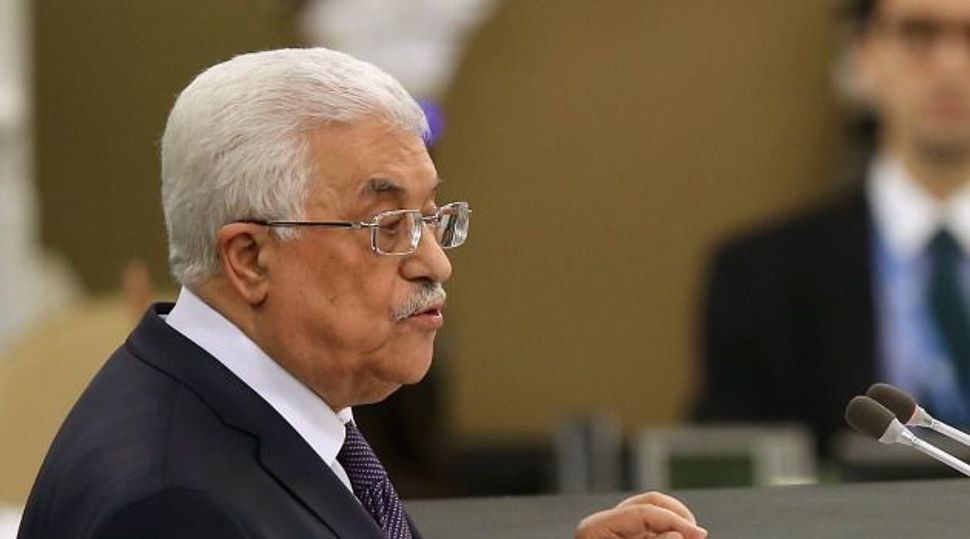 UNITED NATIONS – Palestinian President Mahmoud Abbas said on Thursday that “time is running out” for Middle East peace efforts and urged world powers to rein in Israeli settlement construction that he said could undermine U.S.-sponsored negotiations.

In an address to an annual gathering of world leaders at the U.N. General Assembly, Abbas committed to negotiating with Israel in good faith but he also painted what he called a “dispiriting and bleak” picture for peace prospects.

Abbas’s assessment came one day after Secretary of State John Kerry suggested a more hopeful outlook, saying the two sides had agreed to intensify talks and increase the U.S. role.

The resumption of long-dormant peace talks in July was an achievement for Kerry, but many Israelis and Palestinians – as well as independent experts – are skeptical about the chances of reaching a peace deal in their decades-old conflict.

“Time is running out, and the window of peace is narrowing and the opportunities are diminishing,” Abbas said. “The current round of negotiations appears to be a last chance to realize a just peace.”

Abbas spoke at the United Nations for the first time in the official name of the State of Palestine. Over U.S. and Israeli objections, the General Assembly last November voted to upgrade the Palestinians to “non-member state” from observer entity.

Abbas sought to assure Israelis that the raising of the Palestinians’ U.N. status was not meant to “delegitimize” Israel and he called on them to work with him to “sow the seeds of good neighborliness” between their peoples.

He reserved his toughest criticism for Jewish settlement building on occupied land that the Palestinians want for a state of their own, saying it “aims to change the facts on the ground” and has fractured the concept of the so-called two-state solution to the Israeli-Palestinian conflict.

The United States is seeking to broker an agreement in which Israel would exist peacefully alongside a new Palestinian state created in the West Bank and the Gaza Strip, lands occupied by the Israelis since a 1967 war.

“The international community is asked to remain alert to condemn and stop any actions on the ground that would undermine negotiations – and I refer here, above all, to the continuation of settlement construction on our Palestinian land, particularly in Jerusalem,” Abbas said.

There was no immediate reaction from the Israeli government. But Israel’s parliamentary opposition leader, Shelly Yechimovich of the center-left Labour party, called on Israeli Prime Minister Benjamin Netanyahu to do more for peace.

She said the “moderate remarks” by Abbas – compared to his more strident U.N. speech a year earlier – “foster cautious hope that we face a new era of dialogue that might lead to an accord,” according to a statement from her office.

The modest attention paid on Thursday to the Abbas speech contrasted sharply with how the Palestinian statehood issue dominated the U.N. gathering in 2011 and still ranked high on last year’s agenda. This time, the debut of Iran’s new president, Hassan Rouhani, and the crisis in Syria overshadowed other issues.

The future of settlements is one of the key issues that must be resolved. The last round of peace talks collapsed in 2010 in a dispute over settlement construction in the West Bank and in East Jerusalem, which the Palestinians want as their capital.

About 350,000 Israeli settlers live in the West Bank along with some 2.5 million Palestinians, who say that the settlements deny them a viable and contiguous state. The World Court has deemed the settlements to be illegal. Israel disagrees.

Netanyahu will meet with Obama at the White House on Monday and address the General Assembly on Tuesday.