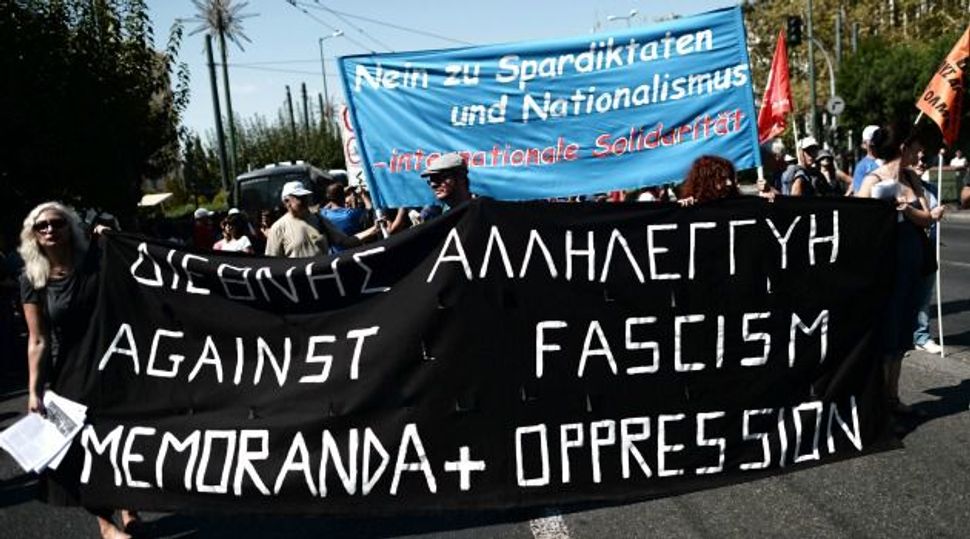 Greek Tragedy: Greece is in turmoil again amid new austerity measures and the killing of a rapper who campaigned against the neo-Nazi resurgence in the country. Image by getty images

Greek police arrested the leader and more than a dozen senior members and lawmakers from the far-right Golden Dawn party on Saturday after the killing of an anti-fascist rapper by a party supporter triggered outrage and protests across the country.

The party’s leader Nikolaos Mihaloliakos, spokesman Ilias Kassidiaris, two other lawmakers and 10 members were arrested on charges of founding a criminal organisation. They are due to appear in court this weekend to be charged formally.

Police confiscated two guns and a hunting rifle from the home of Mihaloliakos, saying he did not have a licence for them.

Golden Dawn, ranked Greece’s third most popular party, is under investigation for the murder of Pavlos Fissas, who bled to death after being stabbed twice by a party sympathiser.

“Shame on them, the people will lift Golden Dawn higher,” Ilias Panagiotaros, a Golden Dawn lawmaker told reporters before his arrest.

Several hundred party supporters gathered outside police headquarters chanting slogans and waving Greek flags. The party on its website called for protests in solidarity with its leader.

Prime Minister Antonis Samaras’s government has so far resisted calls to ban the party, fearing it could make it even more popular at a time of growing anger at repeated rounds of austerity measures and instead, it has tried to undermine the party by ordering probes that could deprive it of state funding.

Samaras ruled out snap elections after the arrests.

Finance Minister Yannis Stournaras said Greece did not face the risk of political instability and Justice Minister Haralambos Athanassiou said all Golden Dawn members who had been arrested would receive a fair trial.

The move to arrest the party members surprised some Greeks wary of political theatre in a country where little has been done to rein in a party widely viewed as neo-Nazi.

“It’s good that they arrested them, but I’m afraid that we will start killing each other now,” said Dimitra Vassilopoulou, a 58-year old housewife.

“Does the government actually mean it or is it just a tactic to impress us? Why didn’t they do anything when the immigrants were killed? How come they just discovered that Golden Dawn is a criminal organisation?”

The party has denied any links to the killing and Mihaloliakos has warned the party could pull its lawmakers from parliament if the crackdown does not stop.

If potential by-elections were won by the opposition, as some polls indicate, Greece’s fragile two-party coalition would become politically untenable, Mihaloliakos has argued.

The party has 18 of parliament’s 300 lawmakers and scored 14 percent of voter support in opinion polls before the stabbing. A poll this week showed this had fallen as low as 6.7 percent.

Greek lawmakers do not lose their political rights or seats unless there is a final court ruling against them but the government has proposed a law that could block state funding for Golden Dawn if police find links to Fissas’s murder.

Golden Dawn, whose emblem resembles a swastika, rose from obscurity to enter parliament last year after promising to mine Greece’s borders to prevent illegal immigrants from entering. Its members have been seen giving Nazi-style salutes but the party rejects the neo-Nazi label.

Human rights’ groups have accused the party of being linked to attacks on immigrants but this is the first time it is being is investigated for evidence linking it to an attack.