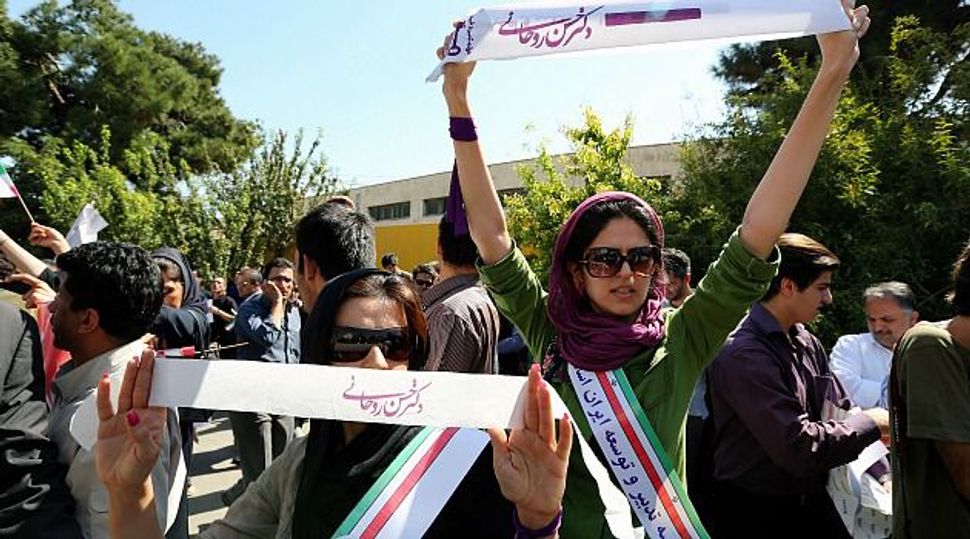 Hundreds of Iranians cheered President Hassan Rouhani on his return from New York on Saturday after his historic phone call with U.S. President Barack Obama but a smaller number of hardliners shouted “Death to America” and threw eggs and shoes at his official car leaving the airport, Iranian media reported.

While an anticipated handshake between Rouhani and Obama at United Nations headquarters failed to materialise, they held a 15-minute call on Friday at the end of the moderate new Iranian president’s trip for the U.N. General Assembly.

Iranian media said hundreds of Rouhani supporters keen to see him make good on pledges of “constructive interaction” with the world to ease Iran’s international isolation and win relief from punitive sanctions turned up to hail his U.N. visit.

They greeted the president with chants of “Rouhani we thank you” and “Iran calls for moderation” and held aloft portraits of him, the student news agency ISNA said.

But about 100 conservative hardliners also appeared, shouting “Death to America”, a standard refrain at radical rallies in Iran since the 1979 Islamic Revolution, and “no compromise or surrender to our national interests”.

Witness reports posted on Twitter said protesters pelted Rouhani’s limousine with eggs and stones in anger over his direct contact with Obama, the first between Iranian and U.S. presidents for 34 years.

The semi-official Mehr news agency ran pictures of some protesters banging the sides of Rouhani’s car as it began to depart the airport. Mehr said one protester threw his shoes at the vehicle, a gesture of deep insult in the Islamic faith.

U.S. officials said the phone call – which focused on how to resolve the standoff over Iran’s disputed nuclear programme – was requested by the Iranian side but in comments to journalists after his return, Rouhani indicated it was an U.S. initiative.

Rouhani won election in a landslide last June, buoyed by many voters keen for steps towards moderation and reform after eight years of intensifying repression at home and isolation abroad under confrontational predecessor Mahmoud Ahmadinejad.

The contacts Rouhani and his foreign minister had with U.S. officials during the U.N. General Assembly were unlikely to have happened without the approval of Iran’s ultimate authority, Supreme Leader Ayatollah Ali Khamenei.

But the polarised reactions on Rouhani’s return hinted at the challenge he faces in winning over anti-Western hardliners, especially in the powerful clerical and security establishments, to his conciliatory approach.

Iranians at home and abroad posted hundreds of messages on Foreign Minister Mohammad Javad Zarif’s Facebook page. “You have made the people of Iran happy, especially the (Rouhani) phone call with Obama,” read one. “We are proud of you” read another. “Don’t be tired. We are hopeful that one day there will be direct flights from Tehran to Washington”, said a third.

There has been little reaction so far from Iran’s political leadership but one influential parliamentarian was upbeat.

“This (phone call) shows that Iran’s place in the world is of critical importance. That the president of America insists on a telephone call is a sign of sincerity,” Mehr quoted the head of parliament’s committee for national security and foreign affairs, Alaeddin Boroujerdi, as saying on Saturday.

The reformist-leaning newspaper Etemaad ran the headline: “Historic contact on the return flight”, with a mocked-up picture of Obama and Rouhani sitting beside each other.

Conservative media chose to stick to coverage of Thursday’s nuclear talks between envoys of Iran and six world powers and a separate, rare meeting between Zarif and U.S. Secretary of State John Kerry.

The United States and its allies have accused the Islamic Republic of seeking covertly to develop a nuclear weapons capability. Tehran says it is enriching uranium only for civilian energy purposes but restricts U.N. inspections.

After years of increasing fears of a new Middle East war over the nuclear dispute, word of the Rouhani-Obama phone call appeared to raise hopes of detente and led to a 2 percent rise in Iran’s rial against the dollar on the open market on Sunday.

Obama said on Friday he and Rouhani had directed their teams to work quickly toward a settlement on Iran’s nuclear activity.

Rouhani said the two men “expressed their mutual political will to rapidly solve the nuclear issue”. On Tuesday, he told the U.N. General Assembly that Iran would never develop nuclear weapons and he later called for a nuclear deal in three to six months.

The phone contact signalled a striking shift in tone between Iran and Washington, which cut diplomatic relations a year after the revolution ousted U.S.-allied Shah Mohammad Reza Pahlavi and led to the U.S. Embassy hostage crisis.

Obama has said for years he is open to direct contact with Iran while also stressing that all options – including military strikes – were on the table to prevent Iran building atom bombs.

Before leaving the airport Rouhani told journalists that contrary to reports in Western media, he had not refused a meeting with Obama earlier in the week but there was insufficient time to coordinate it.

“To have a meeting between the presidents of these two countries there are many necessary steps. If this meeting had been compressed into the programme, it would have been premature,” the official news agency IRNA quoted him as saying.

An Obama administration official said Washington had briefied Israel about the Obama-Rouhani call. Israel, Tehran’s arch-enemy, is deeply mistrustful of the change in Iran’s rhetoric and has warned its allies to be wary of Rouhani.