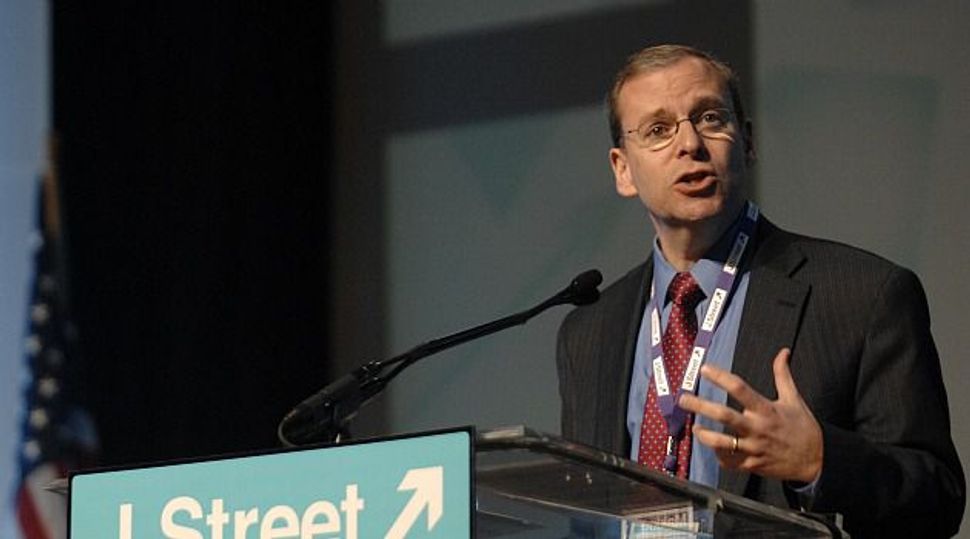 Boasting an impressive growth in numbers and a newly achieved acceptance into the mainstream Jewish organizational world, J Street launched its annual conference with a new campaign aimed at bringing Jewish Americans to endorse a two-state solution for the Israeli–Palestinian conflict.

“Five years ago we had half the people in a basement of a hotel,” said Jeremy Ben Ami, the group’s president, noting the 2,800 participants and the slate of high profile speakers, ranging from Vice President Joe Biden, to Israeli chief negotiator and Justice Minister Tzipi Livni and including civil rights icon congressman John Lewis, Israeli opposition leader Shelly Yechimovich and Obama’s special envoy for Middle East peace talks Martin Indyk.

The new drive, dubbed the “2 campaign,” as in two states for two people, is aimed at educating Jewish Americans about the meaning the two-state solution and at setting the contours for such an agreement, which in J Street’s plan run close to those of the Geneva Initiative: return to the 1967 borders with land swaps; keeping Jerusalem’s Jewish neighborhoods as part of Israel while having the city’s Arab parts join the future Palestinian state; and solving the Palestinian refugee issue without granting the right of return to their former homes in Israel.

J Street has allocated $1 million for the campaign, its biggest effort to date, and has made it a top priority. The campaign, Ben Ami said, is needed in order to create “a political support base,” for the efforts underway aimed at resolving the conflict.

J Street entered its fifth conference at the most optimistic point for Middle East peace since the group’s inception. For the first time since the beginning of the Obama administration, Israelis and Palestinians are engaged in peace talks, initiated by Secretary of State John Kerry and actively supported by the administration.

But while hopes for Middle East peace seem at their high point, interest in the conflict and in resolving it has declined, as attention shifted to other regional areas of crisis: Iran and the renewed hope for negotiations, Syria following the chemical weapons deal, and Egypt and its internal turmoil.

J Street has expressed its support for engaging in talks with Iran and has called on Israel to view these attempts positively.

“I would hope that the Israeli prime minister does not do things and say things that indicate that Israel would not be interested in a diplomatic solution,” said Ben Ami, adding that in any case, Rouhani’s offer should be put to a test, and not and verified. “I’m not saying just accept him on face value.”

Iran and the upcoming Monday meeting between President Obama and Prime Minister Netanyahu, which is expected to focus on the two leader’s differences regarding future negotiations with the Islamic Republic, were on the minds of many at the J Street conference, drawing at times more interest than the Israeli – Palestinian conflict, the main issue on J Street;s agenda.

Israeli Labor Party leader Yechimovich, speaking to a packed plenary hall, used the podium to call on Netanyahu to be neither “naïve nor paranoid” when it comes to chances of reaching a diplomatic solution for the Iranian nuclear crisis.

In another first for J Street, the group showcased its improved relations with the government of Israel not only by having the opening night speech on Saturday delivered by cabinet member Tzipi Livni, but also by enlisting a leading Likud MK, Tzachi Hanegbi, to attend the conference.

According to Ben Ami, any friction that existed with the Netanyahu government in J Street’s early days has long disappeared. “We are so far past that,” he said.

Hanegbi, asked whether he felt out of place as a sole Likud member at a left-of-center conference, joked that he’s “used to arguing with leftist for 30 years.” The lawmaker, once known as a hardliner, expressed guarded support for a two-state solution and tried to minimize the importance of members of his own party who spoke out publicly against such a solution and in favor of abandoning the Oslo Accord.

On Monday, J Street will host Vice President Biden, the highest level administration official ever to take part in the dovish lobby’s conference. Biden will be coming to the event straight from his meeting with Netanyahu at the White House. Netanyahu himself, though invited, will not stop by.