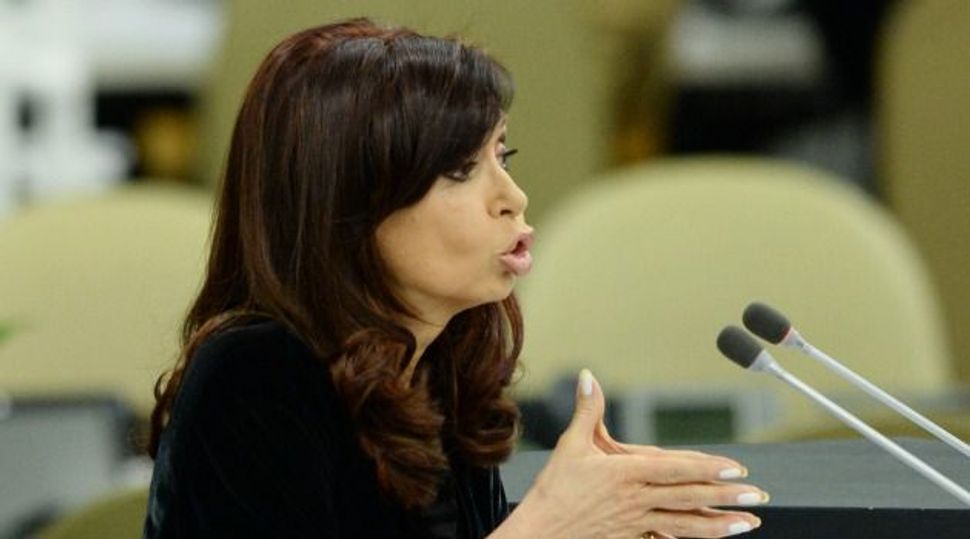 Under Her Skin? Argentina President Cristina Fernandez racked up 31 Tweets about American Jews and their focus on Iran?s role in the 1994 Buenos Aires terror bombing. Image by getty images

Argentinian President Cristina Fernandez in a series of 31 tweets called on the United States to include the issue of the Buenos Aires Jewish Center AMIA bombing in its bilateral talks with Iran.

The tweets posted Monday night from the president’s official Twitter account also mentioned the pressure that she feels from U.S. Jewish organizations about the AMIA case and complained that the focus of the U.S government for these bilateral talks is only on Iran’s nuclear program.

The president does not refer to any Jewish organizations specifically by name.

“Perhaps the AMIA bombing, the case about which every American Jewish organization always asks the Argentine government, was mentioned?” she asks rhetorically in a tweet.

The president referred to last week’s phone call between President Barack Obama and Iranian leader Hassan Rohani “Was the AMIA case ever mentioned?” she asked tweeted to her 2 million followers. “Not at all,” she added.

The president criticized the media´s “double standard” about the Memorandum of Understanding signed between Argentina and Iran to jointly investigate the AMIA case, a 1994 bombing which killed 85 wounded 300. “They say (the agreement) is historic only if the one talking with Iran is the U.S.,” she tweeted from her official @CFKArgentina account. The president added that “The U.S. and other world powers should include AMIA. We hope we´ll be listened to.”