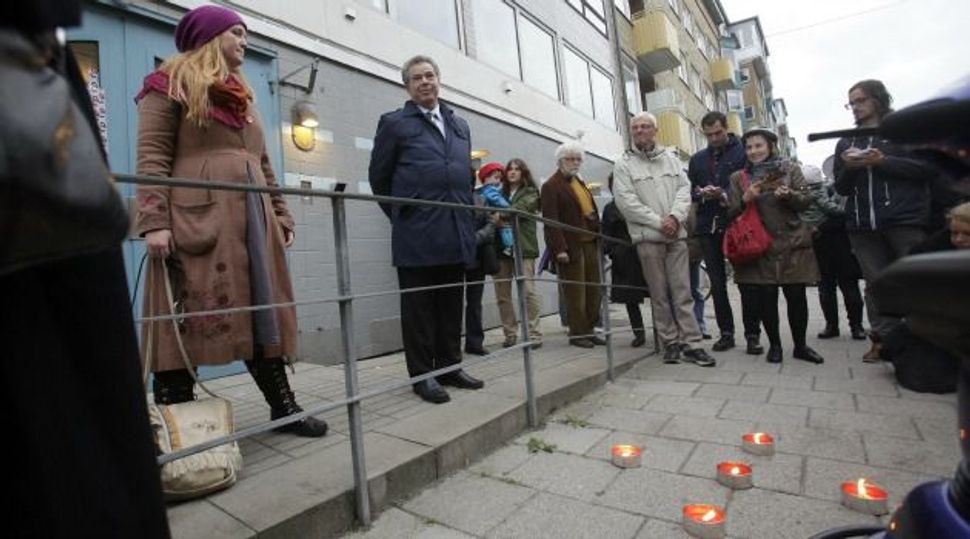 Hide Your Faith: After a Jewish center in Malmo, Sweden was firebombed, Jews and non-Jews wore kippahs to protest the hatred. But many European Jews avoid openly displaying signs of their faith. Image by getty images

A quarter of respondents in a major survey of Jews from nine European countries said they avoid visiting places and wearing symbols that identify them as Jews for fear of anti-Semitism.

Fear of wearing a kippah and other identifiably Jewish items was especially strong in Sweden, where 49 percent of 800 respondents said they refrained from such actions, in a survey conducted this year among more than 5,100 Jews by the European Union Agency for Fundamental Rights.

In France, 40 percent of approximately 1,200 Jews said they avoided wearing such items in public, followed by Belgium with 36 percent, according to preliminary results from the survey, obtained by JTA.

In total, 22 percent of respondents said they avoided “Jewish events or sites” because of safety concerns.

“The results show that a majority of European Jews are experiencing a rise in anti-Semitism,” Gert Weisskirchen, a former representative of the Organization for Security and Co-operation in Europe for fighting anti-Semitism, said Tuesday at a conference in Kiev.

The survey, which began Sept. 3, 2012 and closed last month, was conducted online in France; Britain; Belgium; Germany; Sweden; Italy; Hungary; Romania and Latvia. The full report is due to be published next month in Vilnius.

Figures for people who said they had experienced an anti-Semitic incident in the 12 previous months were 30 percent for Hungary; 21 percent for France and 16 percent in Germany.

“Individual states need to address anti-Semitism not for the sake of the current generation, but to prevent the worsening of the situation for the following one,” said Oleksandr Feldman, the Ukrainian Jewish parliament member who organized the two-day conference titled “From the Beilis Trial to Berlin and Beyond” on the 100th anniversary of the anti-Semitic blood libel trial against Menachem Mendel Beilis, who was acquitted of killing a Christian child to use his blood for rituals.