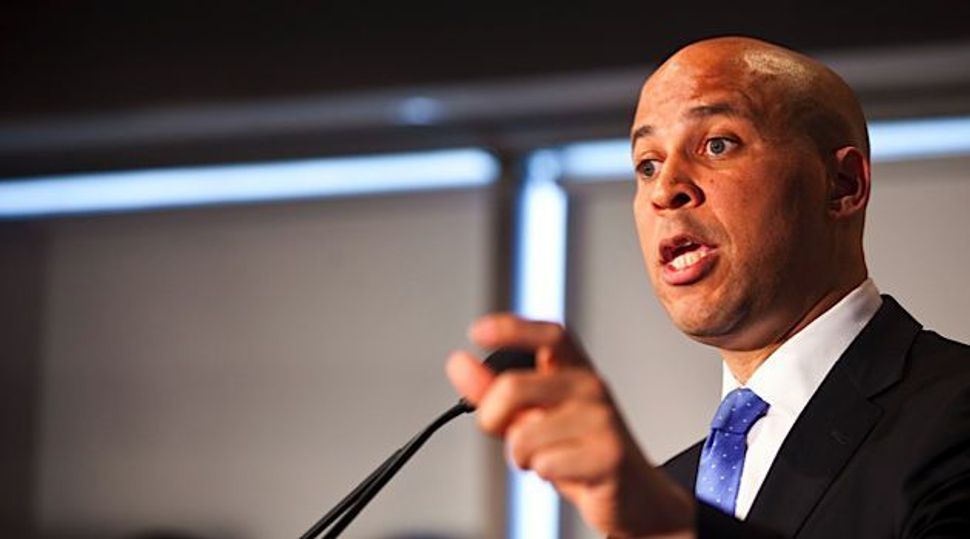 Democrat Cory Booker, the charismatic mayor of Newark, was the unofficial winner of a New Jersey special election on Wednesday, handily defeating a conservative Republican to fill the state’s vacant U.S. Senate seat.

Booker, who had been heavily favored in polls, defeated conservative Republican Steve Lonegan, a former small-town mayor, according to tallies published online by The New York Times, Politico and the Star-Ledger newspaper.

The tallies showed Booker with an 11 point lead over Lonegan with more than 90 percent of the votes counted.

Booker, 44, spoke to cheering supporters in Newark where he thanked them for turning out to vote against the backdrop of the 16-day government shutdown and partisan battling in Washington.

“It would have been easy to listen to this frustrating negativity and stay home today. But here in New Jersey, more than a million people rejected cynicism and came out on a Wednesday, in the middle of October, three weeks before we have another election, to fight the cynicism,” he said.

“You didn’t just vote, you believed that your vote and choice mattered,” he said.

He will fill the U.S. Senate seat held by Democrat Frank Lautenberg, who died in June at age 89.

Booker, a Rhodes scholar and Yale Law School graduate, rocketed to fame as a booster for the state’s largest city, 12 miles (19 km) from Manhattan, which has struggled with poverty and persistently high crime.

His first run for mayor was documented in the Oscar-nominated film “Street Fight.” Booker is known to rub shoulders with celebrities and is a near-constant presence on Twitter.

During Booker’s tenure as mayor, Newark received a $100 million gift to its schools from Facebook founder Mark Zuckerberg, who said he had met Booker and was impressed by his plans.

Lonegan is the former mayor of Bogota and former state director of Americans for Prosperity, a political advocacy group funded by the conservative Koch brothers.

He has said he opposed federal aid to victims of Superstorm Sandy and more recently voiced support for the Republican House members who forced the government shutdown.

Democrats said he could have scheduled the special election for Nov. 5, the day of the general election, and accused him of self-interest and wasteful spending.

They said he was avoiding being on the same ballot as Booker, who could attract Democratic and minority turnout and cut into Christie’s chances of winning re-election by a large margin.

Christie, who said politics did not play a role in the decision, said he wanted to let New Jersey voters have a permanent voice in the Senate as soon as possible.