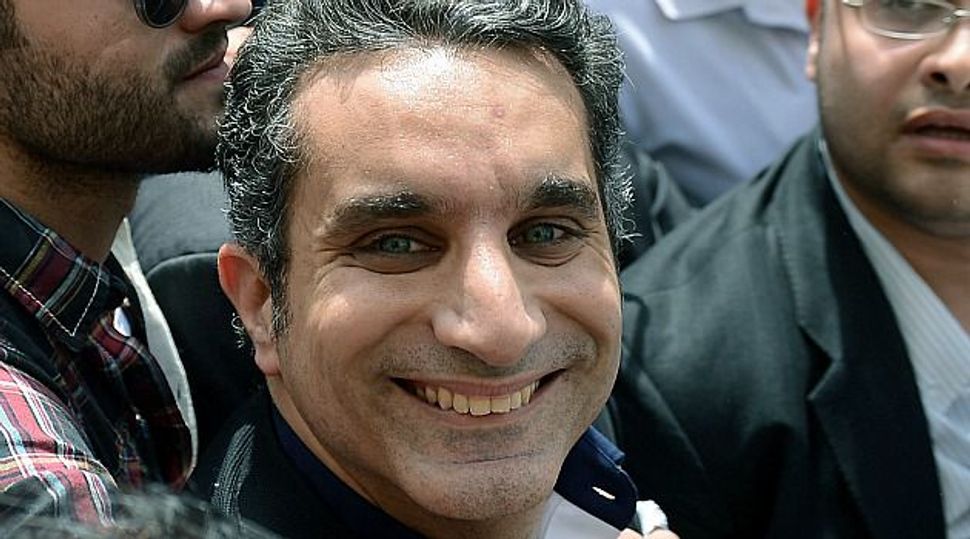 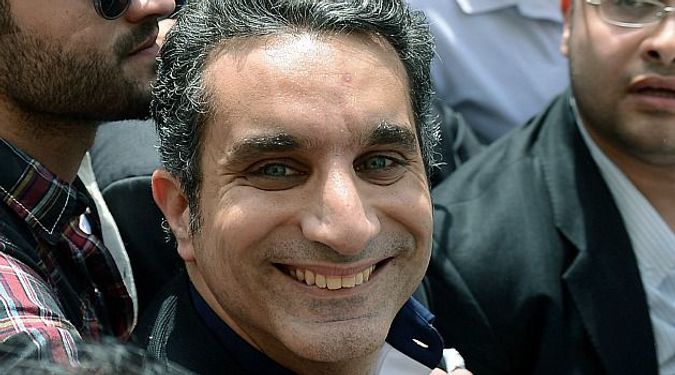 Youssef rose to fame with a satirical online show after the uprising that swept Hosni Mubarak from power in 2011. His programme, which has been compared to the U.S. satirical comedy “The Daily Show with Jon Stewart”, is now broadcast on Egyptian TV.

Youssef had not been on air since July, when the head of the armed forces, General Abdel Fattah al-Sisi, ousted Mursi in response to nationwide protests against his rule, fuelling speculation the show had been halted for fear of reprisal if Youssef were to make satirical remarks about the general.

But on Friday the comedian, along with his team of entertainers, poked fun at all camps – Mubarak loyalists, Mursi’s Muslim Brotherhood supporters who have staged frequent protests since July, and Sisi’s fans.

Early in the show, Youssef and others on the programme broke into a comic song-and-dance routine to the tune of the nursery rhyme “Old MacDonald had a Farm”, which he said aimed to explain to Egypt’s children the country’s political events this summer.

“After the revolution we got a president who thought we would be duped”, they sang in rhyme in Arabic, with the sound of drum beats in the background. “His Renaissance programme was a terrible idea … so the people decided to revolt.”

Referring to the ruler of the country, Youssef later jovially displayed a projected image of Sisi before quickly swapping it with the image of the interim president, Adly Mansour.

He poked extensive fun at the adulation of Sisi’s fans.

“Sisi has turned into … chocolate!” said Youssef, joking about the chocolate bars that have been moulded to the defence minister’s likeness in confectionary stores.

“We’re also selling Sisi-fours,” said an actor on the show playing a pastry-shop owner, making a pun on the tea cake “petit fours.”

Sisi has emerged as a popular figure since July. Posters of him with past Egyptian military heroes who became presidents are ubiquitous. Jewelry carrying his image is sold on the streets.

Military officers are pushing Sisi to run in the country’s presidential elections, although the general has not said he would. Many Egyptians believe that if he ran, he would sweep the elections.

“I am not with the (Islamists), who attacked us and called us heretics … and publicly called for our imprisonment,” Youssef said. He had had an arrest warrant issued against him by Mursi’s prosecutor general over allegations he insulted Mursi and Islam, but Youssef was later released on bail.

Security forces have pursued a sweeping crackdown on the Brotherhood since July, arresting most of its top leaders and accusing many of them of fomenting violence or terrorism. Reconciliation efforts between the government and the Brotherhood have so far been fruitless.

“Are you with reconciliation?” Youssef asks the actor playing the pastry shop owner, to which the actor replies: “No, but we report anyone who buys Rabaa pastries,” referring to the name of the neighbourhood in Cairo that became the epicentre of protests by Mursi’s supporters since July.

“Bassem has become a kind of litmus test for freedom of expression in Egypt. Many people said he wouldn’t dare mention al-Sisi, but he did,” said Amr Helal, a 26-year-old marketing executive who watched the show.

But with political emotions running high in the country, and many Egyptians staunchly backing the army move in July, Friday’s episode stirred mixed reactions.

Facebook and other social networking sites were rife with views both supportive and critical of the episode, with some commentators saying both camps were taking it too seriously.

“Bassem is a traitor. This is a dangerous time in Egypt. How can he satirize the man who saved us from the Islamists and their violence? Our soldiers are dying in Sinai every day at the hands of insurgents,” wrote one Facebook commentator.

A third commented: “Everyone should relax. At the end of the day it’s just a comedy show not a political program.”

Youssef, who had played host to Jon Stewart on his show in Cairo in June, repeatedly mentioned on his show on Friday that he knew his satirical references would unnerve many.

“Despite all the messes that have happened (in Egypt), there is hope, the revolution continues. No one can stifle your view … surely after we got rid of those who call us ‘heretics’ we won’t see those who call us ‘traitors,” he said.