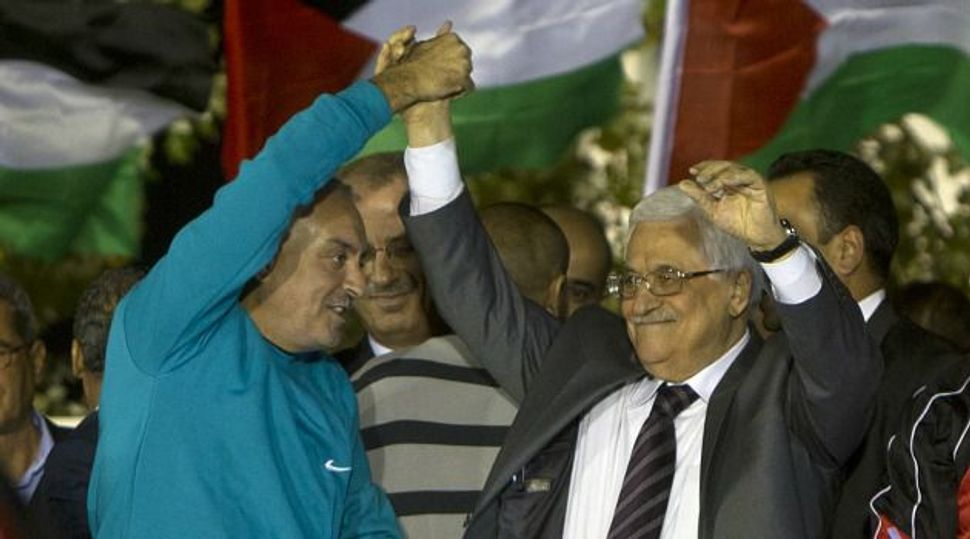 Israel freed 26 Palestinian prisoners on Wednesday as part of U.S.-brokered peace efforts, but said it was pressing on with plans to build more homes for Jewish settlers, in an apparent move to appease hardliners.

The inmates, who were convicted of killing Israelis, basked in a heroes’ welcome from hundreds of relatives and well-wishers in the occupied West Bank and the Gaza Strip.

“Our heroes are coming home, long live the prisoners,” crowds chanted outside the office of Palestinian President Mahmoud Abbas in the West Bank city of Ramallah.

Issa Abed Rabbo, convicted of murdering two Israeli hikers in 1984, was carried through the alleys of the Biblical town of Bethlehem on the shoulders of cheering Palestinians as fireworks went off and patriotic songs blared.

“My feeling is that of a commander returning from battle, carrying a banner of victory and freedom,” Abed Rabbo said, his outstretched fingers forming a triumphant V.

The inmates, jailed before or just after the first Israeli-Palestinian interim peace deals were signed 20 years ago, were released as part of a limited amnesty demanded by the Palestinians to revive long-stalled statehood negotiations.

The second prisoner release since peace talks resumed in July after a three-year break opened fissures in Israeli Prime Minister Benjamin Netanyahu’s rightist government. A pro-settler coalition partner, the Jewish Home party, and members of his own Likud, called on the leader to cancel the amnesty.

Israel’s Interior Ministry announced it would proceed with a plan for 1,500 new housing units in Ramat Shlomo, a settlement in an area of the occupied West Bank that Israel considers part of Jerusalem.

Those plans were first announced in 2010, clouding a visit to Israel at the time by U.S. Vice President Joe Biden, who condemned the project, which was subsequently shelved.

Israel announced last December it would proceed with the construction but froze the move again ahead of a visit by U.S. President Barack Obama in March this year.

The Palestinians, who want to establish a state in East Jerusalem, the West Bank and Gaza, territories captured by Israel in a 1967 war, condemned the move.

“This policy is destructive for the peace process,” said Nabil Abu Rdeineh, a spokesman for Abbas.

Most countries deem Israeli settlements, built on occupied land, as illegal, and Palestinians say the enclave could deny them a viable state. Israel says Ramat Shlomo, as part of its Jerusalem municipality, will remain in its hands in any future peace deal.

Outside Israel’s Ofer prison in the West Bank, where the inmates boarded buses for home, dozens of Israelis protested against the release. One held a sign with the photographs of some of the Israelis they killed.

“The victims of terror are turning they graves,” one placard read.

In all, 104 long-serving Palestinian inmates will be freed in accordance with the U.S.-brokered understandings that paved the way for the revival of peace talks.

Yuval Steinitz, Israel’s strategic affairs minister and a Likud member, made clear in a radio interview on Monday that by agreeing to the prisoner releases, the government effectively had quashed a Palestinian demand to halt settlement building. [ID: nL5N0IJ23Q]

But at the celebrations in Ramallah, Abbas denied any connection between the prisoner release and settlement expansion.