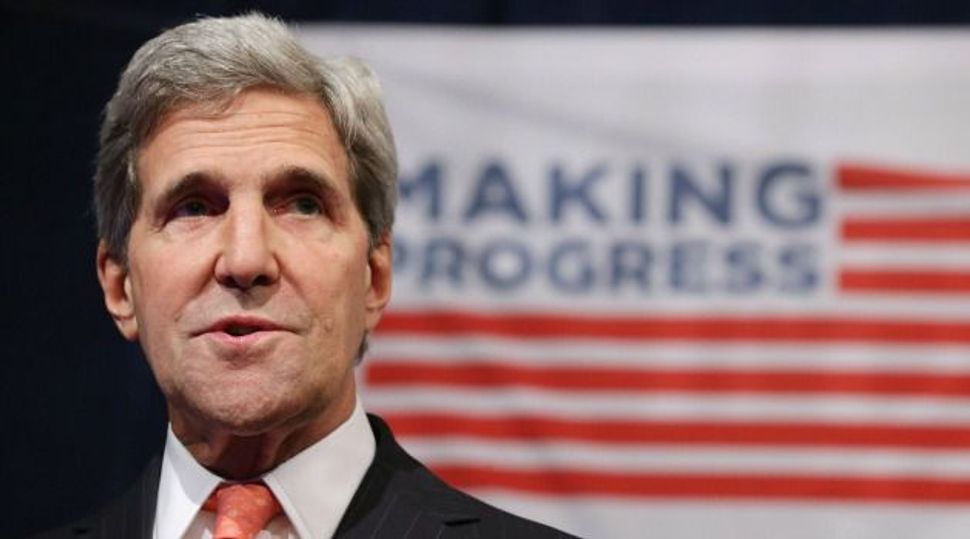 Here?s the Update: Secretary of State John Kerry and other top officials briefed Jewish leaders on the nuclear standoff with Iran. Image by getty images

The White House and Jewish leaders described a National Security Council briefing on Iran as “constructive” and pledged to continue to consult on the issue.

“Leaders of several Jewish organizations participated in an off-the-record discussion with senior Administration officials about issues of the highest priority for the U.S., for our community and for America’s allies, halting Iran’s nuclear weapons program,” said a statement from the Conference of Presidents of Major American Jewish Organizations issued late Tuesday evening.

“We had a constructive and open exchange and agreed to continue the consultation to enhance the prospect of achieving a transparent and effective diplomatic resolution,” it said. “We welcome the reaffirmation of the President’s commitment to prevent Iran from attaining nuclear capability and that all options remain viable to assure that end.”

The meeting was called Tuesday on short notice as the Obama and Netanyahu governments appear to be parting ways on Iran strategy.

Netanyahu has derided what seems to be the emerging U.S. strategy of allowing Iran to maintain a low level of uranium enrichment as part of a final deal to relieve sanctions aimed at stopping Iran from obtaining a nuclear weapon.

Additionally, Netanyahu, along with a number of major Jewish organizations, back enhanced Iran sanctions.

The Jewish groups back lawmakers in Congress who want to advance such sanctions as soon as possible.

The Obama administration is pressing Congress to delay considering such sanctions until after the next round of talks between Iran and major world powers over Iran’s suspected nuclear weapons program, due to take place in November.

A corresponding statement from Bernadette Meehan, a spokeswoman for the National Security Council, suggested that the timing of the meeting with the Jewish leaders was related to the effort to facilitate the next round of talks with Iran.

“Following on the recent P5+1 talks with Iran, and in advance of the next round of talks November 7-8, Senior Administration Officials today briefed the leaders of several Jewish organizations on our progress,” Meehan said, referring to the five permanent members of the United Nations Security Council – Russia, the United States, China, France and Britain – plus Germany.

“The administration officials made clear that the United States will not allow Iran to acquire a nuclear weapon, and that our preference is to resolve the issue peacefully through diplomacy,” Meehan said. “The meeting was constructive and we look forward to continuing these discussions going forward.”

In addition to the Presidents’ Conference, groups represented at the meeting included the American Jewish Committee, the Anti-Defamation League and the American Israel Public Affairs Committee.