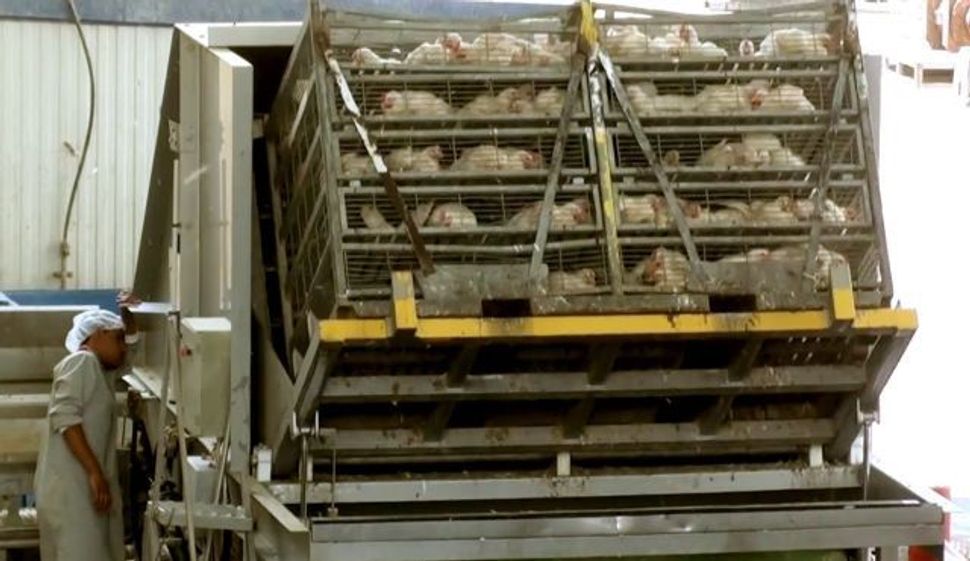 A severe pattern of animal abuse at the Soglowek Foods chicken slaughtering plant has been exposed in an Israeli TV report.

The Channel 10 expose contained disturbing footage showing workers poking iron rods through cages packed with fowl to release doors that frequently get jammed, and how the chickens are knocked around and pile into each other when the old, broken down and twisted cages tip over.

Workers are shown abusively using metal hooks to catch chickens that get loose, and in one case brutally disengaging a leg that was caught. In another sequence a chicken with its head stuck between the bars of the cage has it manually yanked back by a worker but apparently doesn’t survive the ordeal.

Soglowek CEO Pini Kamari said in response: “We regret and apologize for what was shown on Kolbotek, which doesn’t reflect Soglowek’s spirit and policies.”

Ronen Bar, a member of the animal rights group Anonymous, worked undercover at the Soglowek plant for several months. He says the program’s team filming the slaughterhouse found serious violations of the Animal Protection Law and of regulations for transporting animals.

“Most of the problems derive from the infrastructure of the Soglowek slaughterhouse,” says Bar. “There is a machine that tilts the chicken cages downward to unload them − just like unloading gravel. This leads to an appalling situation in which the machine repeatedly tips the cages, slamming the chickens when they get stuck and don’t fall.”