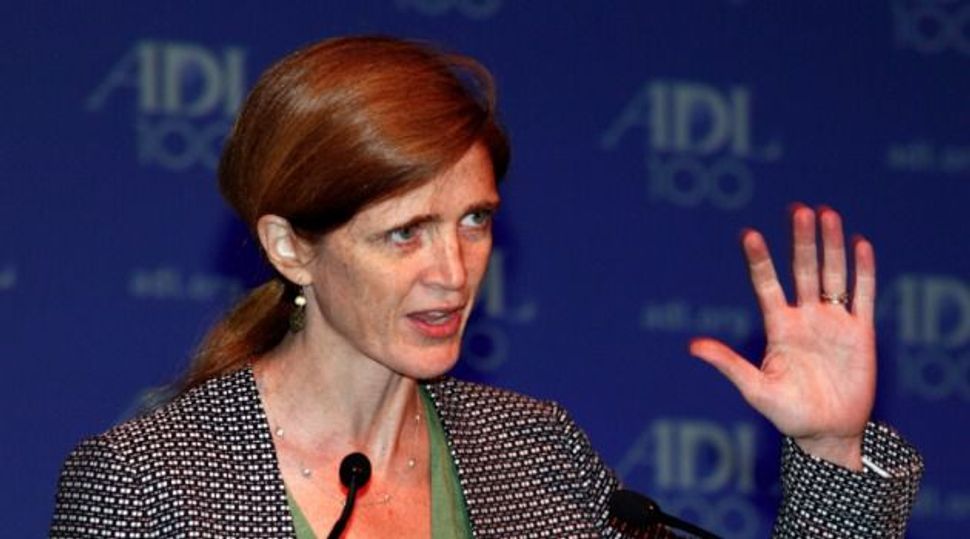 “We understand why some of you are skeptical about engaging Iran. But please remember that we are not engaging Iran for the sake of engaging Iran,” she said. “We are striving to secure an unambiguous and verifiable guarantee that Iran’s nuclear program is a peaceful one and that its government will not build or acquire a nuclear weapon.”

Power only touched briefly on the subject of Israel’s negotiations with the Palestinians, which were brokered by U.S. Secretary of State John Kerry.

“The administration is grateful for the strong public support that exists, including from the Jewish community, for the current peace talks between Israel and the Palestinians,” she said.

Power said one of the priorities of her job is to “push ceaselessly” to end discrimination against Israel within U.N. bodies.

“That discrimination is not right, and it must end,” Power said.

In her appearance, Power also announced that the United Nations has agreed to transfer a full copy of its its wartime commission archives to the U.S. Holocaust Memorial Museum in Washington.

At the conclusion of her talk, ADL National Director Abraham Foxman presented Power with a gift: a heavy book with the word “Jew” written in it 6 million times – 4,400 times per page, Foxman said – to remind Power of the Holocaust.

“I love you,” Foxman told Power as he embraced her.