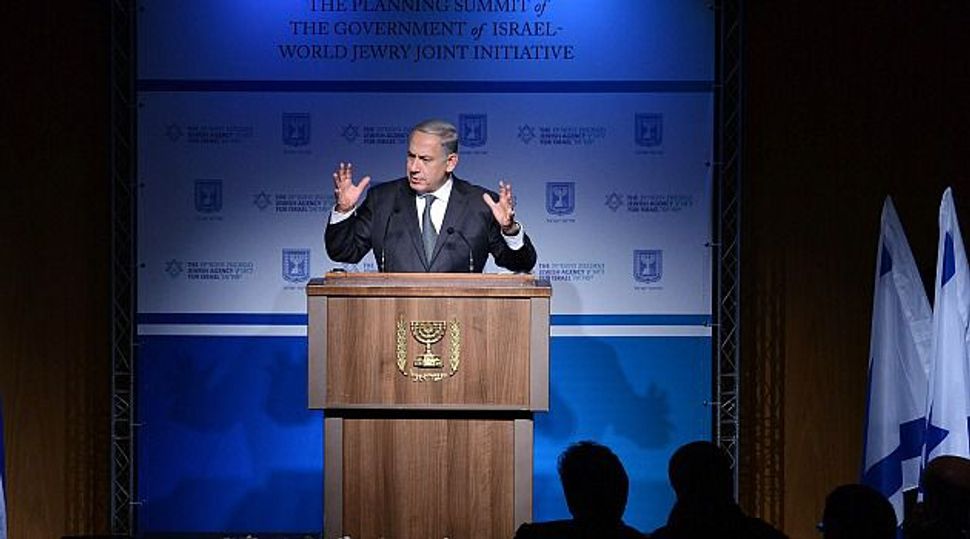 Israel’s worst fears will be realised if a proposed deal by world powers goes ahead with Tehran, sharply curtailing Prime Minister Benjamin Netanyahu options in his campaign against Iran’s contested nuclear programme.

The possible accord might not only tie Israel’s hand in any future military action against Iran, but it could also have an unexpected knock-on effect and stymie U.S.-brokered negotiations between Israel and the Palestinians.

In a bitter outburst, Netanyahu denounced on Friday the contours of an Iranian agreement leaked to the media, once again putting himself in direct conflict with Washington.

“This is a very bad deal and Israel utterly rejects it,” Netanyahu said as he headed into his third round of talks in just 48 hours with U.S. Secretary of State John Kerry.

“Israel will do everything it needs to do to defend itself and to defend the security of its people,” he told reporters.

Tellingly, Kerry did not appear in public with the Israeli leader on Friday and instead flew off in silence to Geneva to join talks between Iran and six world powers, including Russia, China and the European Union.

Despite his veiled threat, Netanyahu would find it almost impossible to launch an attack on Iran should it clinch an initial deal to relax tough economic sanctions in return for a partial pullback of its large nuclear programme.

“I can understand why Netanyahu is so furious,” said Giora Eiland, a former Israeli national security adviser.

“A unilateral military option would have no real chance now. Not because we can’t do it, but because it would be seen as moving against the whole international community,” he told Reuters. “That is something Israel cannot afford.”

Many Western experts believe Iran is seeking to build an atomic bomb, something that Israel views as an existential threat. Iran says its nuclear programme is for civilian needs.

Israel has long feared that world powers would not back its demand for a full dismantlement of Iran’s enrichment facilities before any rollback of sanctions. It has argued that this approach is the only way to ensure Tehran never builds a bomb.

“Netanyahu’s worst nightmare is about to come true,” said Ehud Yaari, an Israel-based fellow at the Washington Institute for Near East Policy. “This is not just Netanyahu. This is the position of everyone in the Israeli security establishment.”

The Israeli leader has often had sour ties with Washington, clashing repeatedly during U.S. President Barack Obama’s first term in office over Iran and the Palestinian peace process.

Relations appeared to improve following Obama’s re-election last year. The U.S. president paid a successful visit to Israel in March and peace talks with the Palestinians resumed in July.

But Kerry’s visit has laid bare the tensions once more and one senior Israeli official, who declined to be named, said Netanyahu might be tempted to use his influence at the U.S. Congress to try to temper the brewing Iran deal.

Congress, which gave the right-wing Netanyahu almost 30 standing ovations when he addressed it in 2011, has already threatened to pursue tough new sanctions against Iran, despite the on-going talks in Geneva – music to Israel’s ears.

Asked whether Israel would now use its leverage in Congress, the senior Israeli official said: “That could well be.” He added: “It would be an exaggeration to call this a major crisis. There’s a disagreement here. It’s a crisis that we’ll find a way through.”

Iran was not the sole bone of contention this week. Kerry also stirred discontent in the government by criticising Jewish settlement building in the occupied Palestinian territories and warning of bloodshed if Israel failed to secure a deal.

Vowing not buckle over Iran, Netanyahu also said on Friday he would not yield over the Palestinians. “I think the pressure has to be put where it belongs, that is on the Palestinians who refuse to budge,” he told reporters.

Eiland, who headed Israel’s National Security Council from 2003-2006, said the United States had “several times in the past” implicitly offered to resolve the Iranian problem in return for Israeli flexibility on the Palestinian conflict.

“I think Netanyahu wants to make it very clear that they should not expect us to be more flexible with the Palestinians because they have not solved the Iranian issue,” he said.

As anger mounted in Netanyahu’s inner circle over the expected Iran deal, some influential voices urged caution, pointing to the fact the agreement under consideration was just a first step that would leave most sanctions still in place.

“(Israel) needs to influence the talks but the question is whether more influence can be brought to bear through adopting extreme positions or through heart to heart talks that create trust,” Amos Yadlin, head of Israel’s Institute for National Security Studies, told Israel radio.

“There needs to be a scrutiny of the details before determining whether the ‘holy of holies’ was destroyed today.”