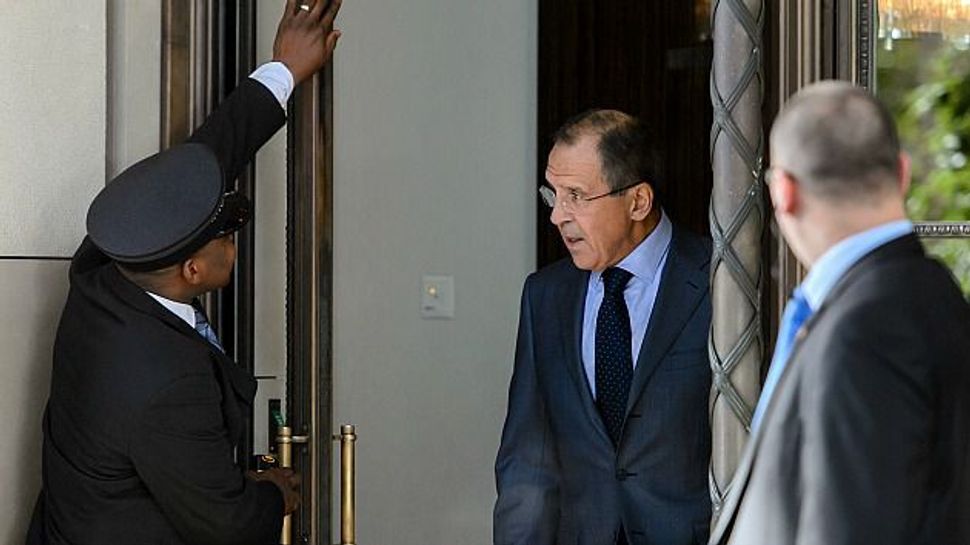 No Deal Yet: Russian Foreign Minister Sergei Lavrov arrives for nuclear talks with Iran in Geneva. Image by getty images

France warned of serious stumbling blocks to a long-sought accord with Iran as unity among Western powers seemed to fray in talks on getting Tehran to curtail a nuclear programme seen as a bomb risk in exchange for relief from economic sanctions.

Iranian media quoted the Islamic Republic’s deputy foreign minister, Abbas Araqchi, as saying “the issues are serious and there is still a gap in stances”, and that the talks would probably end later in the day and be resumed at a later date.

As discussions stretched on, French Foreign Minister Laurent Fabius was doubtful whether they would soon succeed in nailing down an interim deal that would begin to defuse fears of a stealthy Iranian advance towards nuclear arms capability.

“As I speak to you, I cannot say there is any certainty that we can conclude,” Fabius said on France Inter radio, stressing that Paris could not accept a “sucker’s deal”.

His pointed remarks hinted at a rift brewing within the Western camp. A Western diplomat close to the negotiations said the French were trying to upstage the other powers.

“The Americans, the EU and the Iranians have been working intensively together for months on this proposal, and this is nothing more than an attempt by Fabius to insert himself into relevance late in the negotiations,” the diplomat told Reuters, speaking on the condition of anonymity.

In a further indication that the atmosphere of cordiality that reigned in the first round of talks last month and first two days of discussions this week was dissipating, Araqchi complained to Mehr news agency that his counterparts from the six powers “need constant coordination and consultation in order to determine (their) stances.”

The main sticking points appeared to include calls for a shutdown of an Iranian reactor that could eventually help produce weapons-grade nuclear fuel, the fate of Iran’s stockpile of higher-enriched uranium and the nature and sequencing of relief from economic sanctions sought by Tehran.

U.S. Secretary of State John Kerry said on Friday there were “some very important issues on the table that are unresolved. It is important for those to be properly, thoroughly addressed”.

He avoided the media on Saturday before engaging in another two hours of intensive talks with Iranian Foreign Minister Mohammad Javad Zarif and European Union foreign policy chief Catherine Ashton. The three met for five hours on Friday night.

British Foreign Secretary William Hague said the talks have achieved “very good progress” but much more needed to be agreed and it was unclear if this would happen by the end of the day.

“We are very conscious of the fact that real momentum has built up in these negotiations,” he told reporters. “So we have to do everything we can to seize the moment.”

Foreign ministers from all five permanent U.N. Security Council members – Britain, China, France, Russia and the United States – and Germany were due to take part in Saturday’s talks with Zarif.

But it is only the Americans and Iranians, whose estranged countries have not had formal diplomatic ties for more than three decades, with the power to make or break an agreement on Iran’s contested nuclear ambitions.

The fact that any deal might be feasible after a decade of feuding rather than genuine negotiations between Iran and the West highlights a striking shift in the tone of Tehran’s foreign policy since the landslide election in June of moderate Hassan Rouhani as president.

The powers remain concerned that Iran is continuing to amass enriched uranium not for future nuclear power stations, as Tehran says, but as potential fuel for nuclear warheads.

They are searching for a preliminary agreement that would restrain Iran’s nuclear programme and make it more transparent for U.N. anti-proliferation inspectors. In exchange, Tehran would obtain phased, initially limited, relief from punitive sanctions throttling the economy of the giant OPEC state.

The goal now is to take a big first step towards resolving a protracted dispute rife with political baggage and legal complexities and to thereby arrest a drift towards a major new war in the world’s most volatile region.

“LOTS OF WORK” STILL AHEAD BEFORE DEAL

Iran spelled out one major bone of contention. A member of its negotiating team, Majid Takt-Ravanchi, told Mehr news agency on Friday that Western powers should consider easing oil and banking sanctions during the first phase of any deal.

The powers have offered Iran access to Iranian funds frozen abroad for many years but ruled out any broad dilution of the overall sanctions regime in the early going of an agreement.

Diplomats said that even a breakthrough this weekend would be only the start of a long confidence-building process towards a permanent resolution of concerns about Iran’s nuclear quest.

Kerry arrived on Friday from Tel Aviv after what appeared to be a tense meeting with Prime Minister Benjamin Netanyahu, who rejected any budding compromise with Iran.

Netanyahu warned Kerry and his European counterparts that Iran would be getting “the deal of the century” if they carried out proposals to grant Tehran temporary respite from sanctions in exchange for a partial suspension of, and pledge not to expand, its enrichment of uranium for nuclear fuel.

Israel, which is believed to have the Middle East’s only nuclear arsenal and regards its arch-enemy Iran as a mortal threat, has repeatedly mooted possible military action against Tehran if it did not mothball its entire nuclear programme.

Iran dismisses such demands, citing a sovereign right to a nuclear energy industry and most diplomats concede that, with Tehran having exponentially expanded nuclear capacity since 2006, the time for demanding a total shutdown has passed.

But Fabius said the security concerns of Israel and some Arab neighbours of Iran still “have to be taken into account”.

Israeli Intelligence Minister Yuval Steinitz may have had the French remarks in mind when he said on Saturday that he “draws encouragement from the fact that there are other partners to Israel’s concerns about the agreement shaping up”.

DOMESTIC OBJECTIONS ON BOTH SIDES

Negotiators have limited political room to manoeuvre as there is hardline resistance to any rapprochement both in Tehran – especially its elite Revolutionary Guards and conservative Shi’ite clerics – and in the U.S. Congress.

Israel’s complaints could make it more difficult for President Barack Obama to sell any eventual deal to U.S. lawmakers, who have been far from compliant regarding White House proposals on Syria and numerous domestic issues.

U.S. lawmakers have threatened to slap new sanctions on Iran even as the talks in Geneva have appeared to progress, despite White House appeals to hold off while negotiations continue to avoid undermining them.

Eric Cantor, majority leader in the Republican-controlled House, said the nascent Geneva deal would fall short if it did not entirely halt Iran’s nuclear programme – a demand diplomats say is unrealistic and none of the six powers is making.

Criticism also has bubbled up from some leading pro-Israel groups in Washington. White House officials met some of the more hawkish American Jewish leaders last week but failed to win broad support for a pause in further sanctions.

Iran and the powers have been discussing a partial nuclear suspension deal covering around half a year.

One concession under consideration is the disbursement to Iran in instalments of up to about $50 billion of Iranian funds blocked in foreign accounts for years. Another step could be temporarily relaxing restrictions on precious metals trade.

A further step could be Washington suspending pressure on countries not to buy Iranian oil, although any U.S. sanctions relief would come only after Iranian moves to curb enrichment.

Diplomats say that such steps by Washington could be immediate and easily reversible if the Islamic Republic failed to meet its obligations under any agreement.