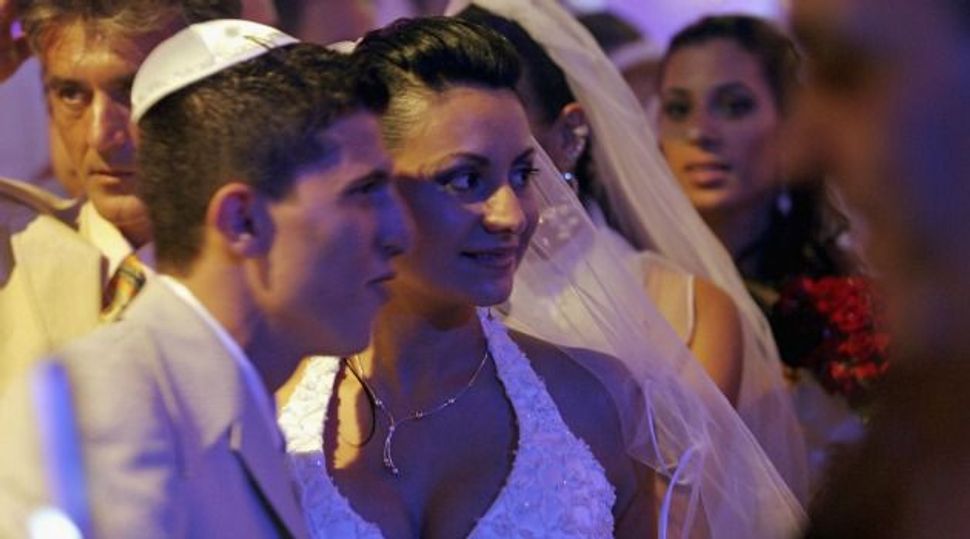 Advocates for religious pluralism in Israel thought they scored a minor victory last month with the passage of a law aimed at loosing the regulations surrounding marriage in the Jewish state.

For the first time, couples could choose an Orthodox rabbi from anywhere in Israel to marry them, not just one from their hometowns.

But a little-noticed amendment to the law could land some rabbis and newlyweds in jail for marrying outside the rabbinate system.

Under the law, anyone who fails to register an Orthodox marriage or divorce with the country’s Chief Rabbinate could face a two-year prison sentence.

It’s not entirely clear to which marriages this would apply.

According to initial reports, Reform and Conservative marriages also could be subject to prosecution under the law. But sources in the Chief Rabbinate and Israel’s Religious Services Ministry told JTA that because the Orthodox-dominated rabbinate does not recognize Reform or Conservative weddings as “marriages,” only Orthodox ceremonies that are not registered could be subject to prosecution.

Under this logic, if the Chief Rabbinate considers the wedding “unkosher” – for example, it includes liberal innovations like the bride presenting a ring to the groom – the couple would likely not be considered married by the rabbinate and thus not subject to penalties under the law, said a rabbinate source who wished to remain anonymous because he is not authorized to comment on the matter.

But the source said that if the wedding is considered valid according to standards of the Chief Rabbinate, including core features of an Orthodox ceremony such as a marriage contract and the recitation of the seven traditional blessings, then participants could face jail time if the marriage is not registered.

Idit Druyan, spokesperson for Deputy Religious Services Minister Eli Ben-Dahan, told JTA that the purpose of the law is to discourage husbands from remarrying without ritually divorcing their current wives.

While unregistered weddings by Orthodox rabbis are relatively few in number, religious pluralism advocates say growing numbers of Orthodox Jews are choosing that option, either in protest of the Chief Rabbinate or because they feel the rabbinate is out of touch with their needs.

“Weddings are a private matter and the state is getting involved,” said Batya Kehana-Dror, who aids women undergoing ritual divorce. She said couples are marrying outside the rabbinate “to break the monopoly.”

“That only rabbis who are approved can marry and divorce when most of the population is not religious is a third-world law,” Kehana-Dror said.

Two officiants who perform Orthodox weddings outside the auspices of the rabbinate told JTA that they intend to keep performing them, regardless of the amendment. Both requested anonymity so as to avoid arrest.

One officiant, who adds rituals for women to the ceremony and makes adjustments to the marriage contract for the protection of the bride, said she would be willing to serve as a test case to challenge the law in court.

“As long as the State of Israel doesn’t allow its citizens to marry the way they feel is correct, in terms of their own sense of Jewish identity, then I have no problem taking the civil liberty of making sure that people can set up their intimate connection and mutual commitment to each other in the way they want,” she said.

“As someone who believes in the evolution of Jewish law, gender equality and continuing Jewish tradition, you can’t expect the current ultra-Orthodox monopoly on Jewish marriage in this country to meet the needs of how people live their lives today.”

The other officiant told JTA that transgressing the Chief Rabbinate’s restrictions does not necessarily mean breaking Orthodox Jewish law.

“I’m not saying that Orthodox people won’t raise their eyebrows,” he said. “I provide a solution to people who want a connection to their Jewish identity without coercion.”