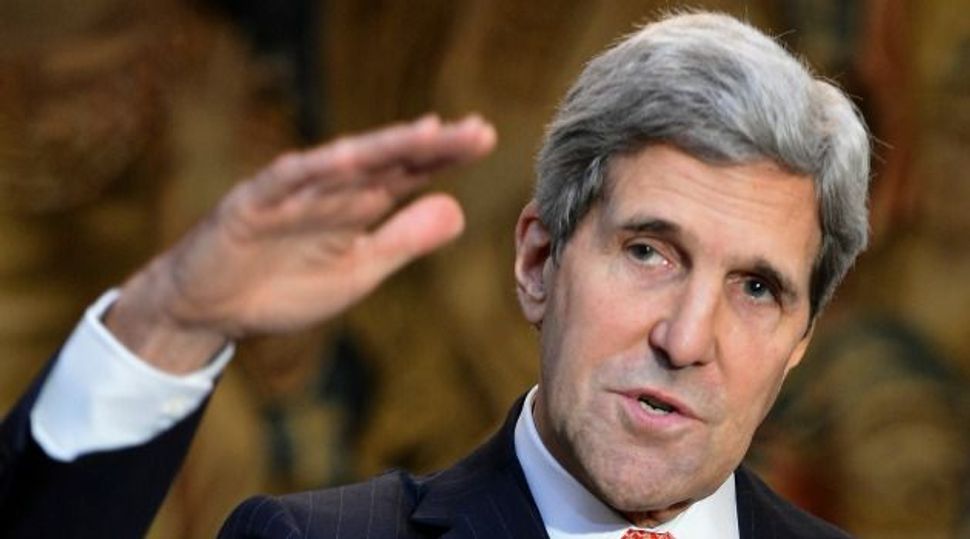 Secretary of State John Kerry said on Monday he hoped an agreement to end a dispute over Iran’s nuclear program would be completed within months, although Washington was not engaged in a race to seal a deal.

Iran and six world powers came close to a preliminary agreement at the weekend during talks in Geneva and decided to resume negotiations on Nov. 20 in their attempt to defuse a decade-old standoff and allay fears of a drift towards a wider Middle East war.

“This is not a race to complete just any agreement,” Kerry told a news conference during a visit to the United Arab Emirates. However, he added: “Through diplomacy we have an absolute responsibility to pursue an agreement.”

While saying that a deal with Iran was expected within months, Kerry tried to reassure Washington’s Arab allies and Israel that his country would not abandon them.

Thumping the podium, Kerry said President Barack Obama had said “that he will continue to defend his friends and allies in this region, the UAE, Saudi Arabia, others, he will defend them against any external attack.

The fact that a deal might be within reach after a decade of increasing confrontation between Iran and Western powers shows the shift in the tone of Tehran’s foreign policy since President Hassan Rouhani was elected in June.

Rouhani began diplomatic moves towards a nuclear deal in order to ease sanctions that have throttled Iran’s vital oil industry and cut it off from the international banking system.

But with a breakthrough in Geneva tantalisingly close, divisions within the powers emerged when France declined to endorse the proposal, believing it did not do enough to neutralise the risk of an Iranian atom bomb.

French Foreign Minister Laurent Fabius nonetheless expressed hope on Monday that a deal could be reached, although he said Tehran still had to make an effort on a few points.

“We are not far from an agreement with the Iranians, but we are not there yet,” he told Europe 1 radio.

Some diplomats accused France of grandstanding during the talks at the weekend, which Fabius denied, saying Paris was not isolated but had an independent foreign policy.

Kerry denied reports of rifts among the powers and suggested Iran was not ready to accept the plan at that point.

Fabius said Iran must suspend construction of its Arak heavy-water reactor and halt uranium enrichment to a concentration of 20 percent to win a relaxation of the sanctions, a position long held by Paris.

“I am hopeful we will reach a good deal. We want an accord that ensures regional and international stability,” Fabius said. “If we don’t reach an accord it would be a considerable problem in a few months.”

The United Nations nuclear watchdog said it and Iran had signed a joint statement on cooperation to resolve remaining nuclear issues.

The technical agreement opens the way for International Atomic Energy Agency (IAEA) inspectors to visit the Arak site and the Gachin uranium mine, and for measures requested by the agency to be implemented.

“The practical measures will be implemented in the next three months, starting from today,” IAEA head Yukiya Amano told a news conference in Tehran, broadcast on state television.

Iran and the six powers are searching for a preliminary agreement that would cap Iran’s nuclear capacity and open up the programme to U.N. inspectors. In exchange, they have offered phased, limited and reversible relief from sanctions. Iran, however, wants an early end to oil and banking sanctions.

Under discussion is a temporary deal entailing a freeze to higher-grade uranium enrichment – which Iran bills as fuel for a medical research reactor but which is also potential material for bombs – lasting about six months.

During that time, Iran and the six powers would negotiate a permanent agreement aimed at ensuring that none of Iran’s nuclear activities could be diverted towards bomb-making. Tehran says its nuclear programme is entirely peaceful.

In an apparent attempt to keep hardliners on side, Rouhani spoke on Sunday of foreign policy “red lines” and vowed not to bow to threats.

Israel, which calls Iran’s nuclear drive a threat to its existence, condemned the interim deal as it would leave some of Iran’s nuclear fuel-making capacity intact, while giving Tehran respite from sanctions.

Prime Minister Benjamin Netanyahu served notice that Israel would not feel bound by such a deal, unmistakably reiterating a veiled threat to take military action if it deems diplomacy to have failed to restrain Iran’s nuclear ambitions.