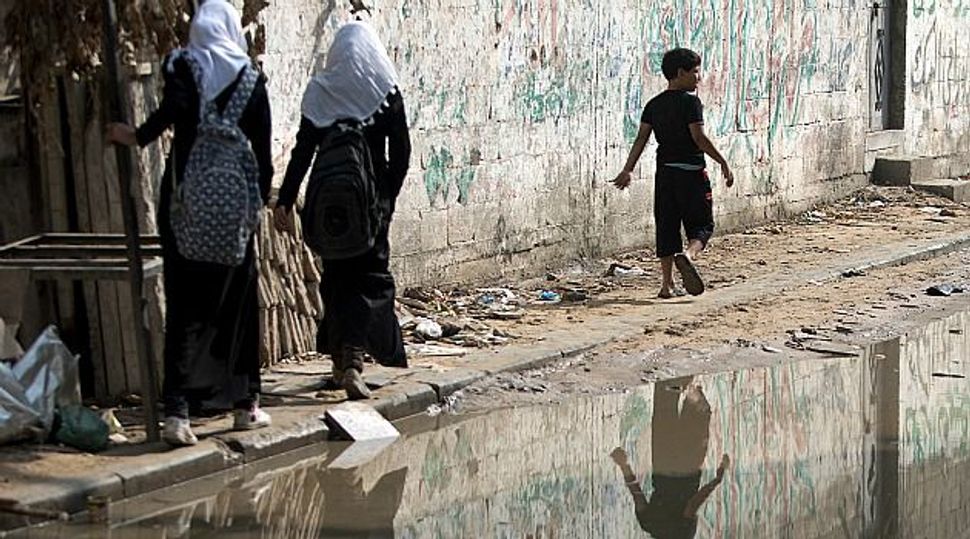 Children waded through sewage submerging the streets of a central Gaza neighbourhood on Thursday, a day after one of the blockaded Palestinian enclave’s largest waste water treatment plants stopped for lack of fuel.

Fetid muck, which bubbles up from manholes and overflows from the idle plant when waste goes untreated, could soon spill into the homes of tens of thousands more residents in downtown Gaza City, officials and residents said.

“This is the start of a catastrophe and unless the world listens to our cries, a real disaster may hit Gaza and its people,” Gaza municipality’s Sa’ad El-Deen Al-Tbash said.

“This is a humanitarian, not a political issue. Gaza’s children did nothing to deserve being stuck in sewage,” he told Reuters.

Gazan municipality officials said the treatment plant served 120,000 residents. They warned that other waste water facilities may soon run out of petrol to fuel generators.

Along one street, passersby covered their noses, and some residents driving donkey carts helped those slogging through pools of waste.

Egypt’s closure of most of the estimated 1,200 tunnels run by the Islamist Hamas group has virtually stopped Egyptian fuel coming into Gaza, forcing Palestinians to buy Israeli imported petrol at double the price – 6.7 shekels ($1.9) a litre.

Egypt’s military backed government fear the tunnels are used to take weapons into the Sinai Peninsula, and accuse Hamas of backing the Egyptian Muslim Brotherhood, which was ousted by the security forces in July.

Israel has imposed its own blockade on Gaza, allowing in fuel and a restricted list of imports since Hamas took control in 2007. Hamas has spurned Western calls to recognise Israel and renounce violence.

Unable to buy the expensive Israeli petrol, some Gaza taxi drivers have looked for alternatives in their kitchens, using gas from domestic tanks or mixing cooking oil with diesel.

“I can’t fill my car with Israeli petrol … I couldn’t make a living if I did,” said a Gaza taxi driver who installed a bottle of cooking gas in his vehicle.

He asked not to give his name to avoid hefty police fines for using the fuels, which are deemed a health hazard.

Despite the risks, the practice is widespread.

“Passing through some Gaza streets, it smells like a big pot of french fries,” quipped one Gaza Facebook user.

Gaza economist Maher Al-Tabbaa’ said the shortages of fuel and power meant that many businesses could not afford to run a generator, which costs about 100 shekels ($28.5) an hour.

“The continuing stoppage of the Gaza power plant for 18 hours a day foreshadows a real catastrophe that might affect the basic food security of the people as well as the health and education sectors,” Tabbaa’ said.

The fuel shortage is affecting life at every level.

Residents have taken to planning their social lives around the power cuts. Many make sure not to leave homes in the evening without a torch.

“The first question someone asks when invited over by a friend is ‘will there be electricity? I don’t want to climb the stairs’,” said Ali Mohammed, an electrician.

“I blame the whole world,” he said.