France Pledges Its Support of Israel on Iran Nuclear Deal 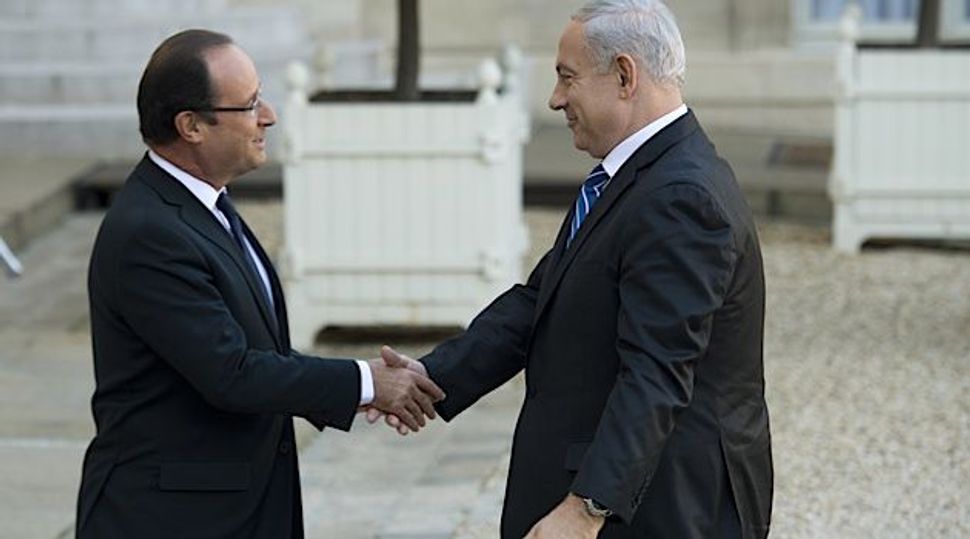 President Francois Hollande assured Israel on Sunday that France would continue to oppose an easing of economic sanctions against Iran until it was convinced Tehran had ended a pursuit of nuclear weapons.

Hollande’s pledge could help underpin an intensive campaign by Prime Minister Benjamin Netanyahu to convince Israel’s main ally, the United States, and other leading powers to toughen terms of a proposed nuclear deal with Iran ahead of negotiations reconvening this week in Geneva.

Differences over how to ensure Iran does not obtain nuclear weapons have opened a rift between Netanyahu and U.S. President Barack Obama, whose relationship has long been fraught. France has taken a tough line with Iran, helping Paris forge closer ties with Tehran’s foes in Israel and the Gulf.

“France will not give way on nuclear proliferation,” Hollande said at a welcoming ceremony at Tel Aviv airport. “So long as we are not certain that Iran has renounced nuclear arms, we will keep in place all our demands and sanctions.”

After Hollande’s three-day state visit, Netanyahu is due to travel to Moscow on Wednesday to see Russian President Vladimir Putin and return to Israel to meet U.S. Secretary of State John Kerry on Friday – by which point U.S. and Russian officials have said a preliminary deal with Iran may have be struck.

Netanyahu has condemned a proposal, to be discussed by Iran in talks starting on Wednesday with six powers – France, China, Britain, Germany, Russia and the United States – to ease sanctions if it suspends some nuclear activities.

“I hope that we will be able to persuade our friends during this week and in the days that follow to get a much better agreement,” Netanyahu told his cabinet.

Netanyahu says tough Western measures must not only remain in place but be strengthened until Iran dismantles its entire uranium enrichment programme, arguing that anything less would enable it to develop nuclear bombs.

Netanyahu, who has warned that Israel is willing to attack to prevent Iran acquiring nuclear weapons capability, has won no support for his demand from Obama, who faces possible moves in Congress to ratchet up sanctions.

The Israeli leader rejected Obama’s contention that any loosening of sanctions in an interim agreement could be reversed if Iran failed to abide by its terms.

“In practice, that may be the president’s desire and intention … but I already see the countries and the investors and the companies scrambling to get to Iran,” Netanyahu told CNN, saying an easing of sanctions now would bring lasting new investment and trade to Iran.

“Increase the sanctions,” he urged. “In fact, if you do a bad deal, you may get to the point where your only option is a military option.”

In remarks broadcast on Saturday, Russian Foreign Minister Sergei Lavrov said the six world powers and Iran were close to a preliminary agreement. His comments came a day after a senior U.S. official said a deal could be reached in the negotiations this coming week.

The previous round of talks in Geneva on Nov. 7-8 appeared close to clinching a deal, but ended without agreement. Western diplomats said one of the obstacles was Iran’s argument that it retains the “right” to enrich uranium.

But in a possible way around the sticking point, Iran’s chief negotiator and foreign minister, Mohammad Javad Zarif, said on Sunday that while his country has a right to enrich uranium, it was not insisting others recognise the entitlement.

Iran denies that it wants to develop nuclear weapons capability and insists that its programme is limited to peaceful generation of electricity and medical research.

Netanyahu said the Iranian issue will top the agenda of his talks with Hollande. Israel, widely believed to be the Middle East’s only nuclear-armed power thanks to French assistance in the 1950s, has praised France for taking a tough stance in Geneva, and Tehran accuses Paris of blocking an agreement.

At the airport ceremony, attended by Netanyahu and Israeli President Shimon Peres, Hollande said France was taking Israel’s concerns into account, adding in Hebrew: “I will always remain a friend of Israel.”

Kerry has caused a stir in Israel by accusing it of over-reacting in its opposition to the proposed deal.

“John Kerry is a old friend of mine and is also a friend of Israel,” Netanyahu said at the cabinet meeting, voicing a more conciliatory tone than at the end of an acrimonious visit by the top U.S. diplomat last week.

“I want to clarify that even among the best of friends there can be disagreements, certainly on matters that concern our future and our destiny,” the Israeli leader said.

Legislation to impose tough new sanctions on Iran could come to the floor of the U.S. Senate in the coming week, just as diplomats head to Geneva.

Four Republican senators have written to Obama expressing deep concern about the negotiations. The legislators cited reports that Iran would obtain up to $20 billion in sanctions relief but not be required to shut down centrifuges, close facilities or get rid of enriched uranium.

France Pledges Its Support of Israel on Iran Nuclear Deal