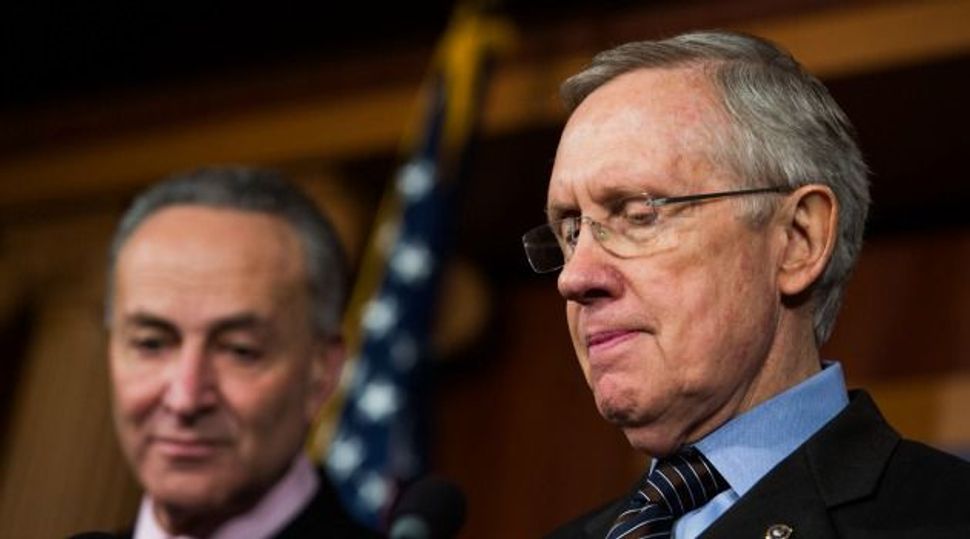 Now the Stick: Harry Reid and Chuck Schumer are among a bipartisan group of senators pushing for harsher measures against Iran. Image by getty images

Senate Majority Leader Harry Reid said on Thursday he was committed to moving ahead with a tougher Iran sanctions bill when the Senate returns from a holiday recess early next month, adding to pressure on negotiators meeting in Geneva on a deal to curb Iran’s nuclear program.

“I will support a bill that would broaden the scope of our current petroleum sanctions, place limitations on trade with strategic sectors of the Iranian economy that support its nuclear ambitions, as well as pursue those who divert goods to Iran,” Reid said on the Senate floor.

A sanctions bill has been held up in the Senate Banking Committee for months, after President Barack Obama’s administration appealed for a delay to allow time to pursue a diplomatic solution to the Iranian nuclear crisis. The West says Iran is pursuing nuclear weapons, but Tehran says its nuclear program is for peaceful purposes.

The holdup by Obama’s fellow Democrats, who control the Senate, angered many Republicans as well as some Democrats who threatened to push ahead with their own sanctions measures if the bill in the Banking Committee did not advance.

Members of Congress, backed by the influential pro-Israel lobby, tend to be more hawkish on Iran than the Obama administration.

Making it clear that they want sanctions to go ahead, 14 Democratic and Republican senators issued a statement later on Thursday saying they would work together “over the coming weeks” to pass bipartisan legislation to impose new sanctions on Iran.

“A nuclear weapons capable Iran presents a grave threat to the national security of the United States and its allies and we are committed to preventing Iran from acquiring this capability,” the group said.

Among senior senators signing the statement were Democrats Robert Menendez, chairman of the Senate Foreign Relations Committee, and Charles Schumer, one of the party’s Senate leaders, as well as Republicans Bob Corker, the top Republican on the foreign relations panel and John McCain, the party’s 2008 presidential nominee.

Negotiators from world powers were meeting in Geneva on Thursday for a third round of talks to finalize an interim deal for Tehran to curb its nuclear program in exchange for some sanctions relief.

Reid said he strongly supports the negotiations, hopes they succeed and wants them to produce “the strongest possible agreement.”

But he said he was aware that Iran could keep them from succeeding. He said he was a strong supporter of the tough sanctions regime now in place and believed it had brought Tehran to the negotiating table.

“While I support the administration’s diplomatic effort, I believe we need to leave our legislative options open to act on a new, bipartisan sanctions bill in December, shortly after we return,” Reid said.

The Senate and House of Representatives are scheduled to be out of session next week for the U.S. Thanksgiving holiday on Thursday.