Congress Iran Hawks Back Off — for Now 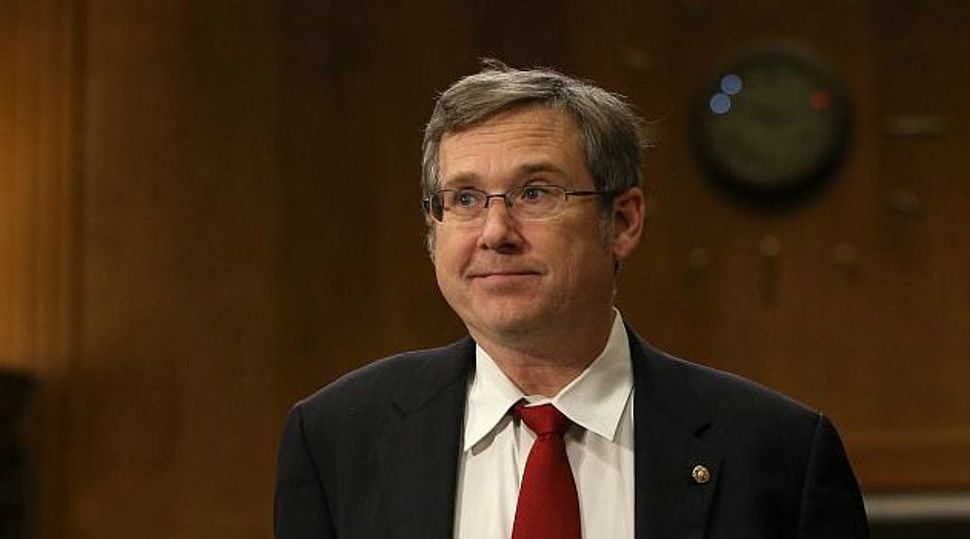 Big Stick: Sen. Mark Kirk (R-Ill.) and other Iran hawks are planning to propose new sanctions that would kick in if the nuclear deal falters.

(JTA) — They want to brandish a new stick against Iran, but hawks in Congress aren’t going to use it — yet.

For all the disappointment they expressed following the deal on Iran’s nuclear program, skeptics in Congress appear to be willing to give the agreement brokered by the Obama administration space to breathe — albeit with tough new punitive measures in place should Iran fail to live up to its end of the bargain.

“I will continue working with my colleagues to craft bipartisan legislation that will impose tough new economic sanctions if Iran undermines this interim accord or if the dismantlement of Iran’s nuclear infrastructure is not underway by the end of this six-month period,” U.S. Sen. Mark Kirk (R-Ill.), a leader in passing Iran sanctions, said after the deal’s announcement on Saturday night.

That’s a shift from pre-deal statements in which Kirk was leading an effort to push through new sanctions not conditioned on the outcome of talks between the United States and other world powers and Iran.

Proponents of a tougher line against Iran say the sanctions talk wasn’t an empty threat and helped shaped the outcome of the interim deal. Moreover, Congress is not dropping the stick: Kirk and Sen. Robert Menendez (D-N.J.), the chairman of the Senate Foreign Relations Committee, are preparing new sanctions legislation to take effect if Iran violates the interim deal.

The two senators “will be working over the Senate recess to craft a bipartisan sanctions bill that establishes a mandatory fail-safe to this interim agreement, ensuring sanctions come back in spades if Iran cheats during the next six months or if Iran’s nuclear infrastructure is not being dismantled at the end of the six-month period,” a congressional aide told JTA in an email. “We should expect this legislation to go to the president’s desk for signature before the end of the year.”

But it’s not clear if pro-sanctions lawmakers have backing from the Senate leadership for new sanctions.

“I said when we come back, we’ll take a look at this to see if we need stronger sanctions, ” Sen. Harry Reid (D-Nev.), the majority leader, said Monday in an NPR interview quoted by Roll Call, a Capitol Hill daily. Reid said Menendez and Sen. Tim Johnson (D-S.D.), the chairman of the Senate Banking Committee, will study the issue.

“They will hold hearings if necessary, and if we need more work on this, if we need to do stronger sanctions, I’m sure we will do that,” Reid said.

The majority leader’s emphasis on the role played by Johnson is significant.

Johnson, a moderate Democrat, thus far has resisted efforts to advance through his committee new sanctions passed over the summer by the U.S. House of Representatives. A former Johnson staffer told JTA that the senator, once thought of as a go-along-to-get-along senator, may feel freer to resist pressure from his colleagues and the pro-Israel community because he has decided not to run again next year.

Other pro-Israel Democrats in the Senate — among them Sens. Dianne Feinstein (D-Calif.), the chairwoman of the Intelligence Committee, and Carl Levin (D-Mich.), the chairman of the Armed Services Committee — have made clear that they would oppose intensified sanctions kicking in while talks were taking place.

“I am baffled by the insistence of some senators to undermine the P5+1 talks,” Feinstein said in a Nov. 15 statement, referring to the six major powers — Russia, China, Britain, France and Germany in addition to the United States — involved in the Iran negotiations. “I will continue to support these negotiations and oppose any new sanctions as long as we are making progress toward a genuine solution.”

Iran hawks already are unhappy with the interim deal, which places some restrictions on Iranian uranium enrichment in exchange for some sanctions relief but allows Iran to keep enriching low-level uranium and keeps in place its existing enrichment infrastructure. The hawks are determined to make sure that a final deal incapacitates any weapons-making capability.

The deal must ensure that Iran ends “all nuclear weapons capability — all the enriched uranium, all the centrifuges,” Sen. Chuck Schumer (D-N.Y.), the third-ranking Democrat in the Senate, said Sunday at an event for Ohel, a Jewish social services provider.

“A fairer agreement would have coupled a reduction in sanctions with a proportionate reduction in Iranian nuclear capability,” Schumer said. “The goal of the administration is to eliminate all of Iran’s nuclear weapons-making capability by the end of the final negations. It is still my hope they can achieve that goal.”

In addition to keeping up pressure on the Iranians to follow through on their commitments, new sanctions legislation could help shape the outcome of a final-status deal, a source at the American Israel Public Affairs Committee, or AIPAC, told JTA on condition of anonymity.

“Our fundamental goal is that in the final agreement, the United States must prevent a nuclear-capable Iran,” said the AIPAC source, who emphasized that such legislation is in the “conceptual” stage and would not be drafted until after the Thanksgiving break. The legislation “essentially will condition the environment for a final deal.”

Joel Rubin, a former Senate staffer, said Congress must tread carefully lest it be accused of scuttling the deal and driving away U.S. allies that have maintained the sanctions regime that helped bring Iran to the negotiating table. Rubin now works for the Ploughshares Fund, an anti-proliferation advocacy group that backs the deal brokered in Geneva on Saturday.

On Monday, Israeli Prime Minister Benjamin Netanyahu, who over the weekend blasted the interim agreement as a “historic mistake,” appeared to be tamping down his rhetoric a notch.

“It is true that the international pressure which we applied was partly successful and has led to a better result than what was originally planned, but this is still a bad deal,” he told the Knesset. “It reduces the pressure on Iran without receiving anything tangible in return, and the Iranians who laughed all the way to the bank are themselves saying that this deal has saved them.”

Netanyahu said he was dispatching his national security adviser, Yossi Cohen, to Washington to consult on the deal.

“That agreement must lead to one result: the dismantling of Iran’s military nuclear capability,” Netanyahu said. “I remind you that only last week, during the talks, the leaders of Iran repeated their commitment to destroy the State of Israel, and I reiterate here today my commitment, as prime minister of Israel, to prevent them from achieving the ability to do so.”

Congress Iran Hawks Back Off — for Now