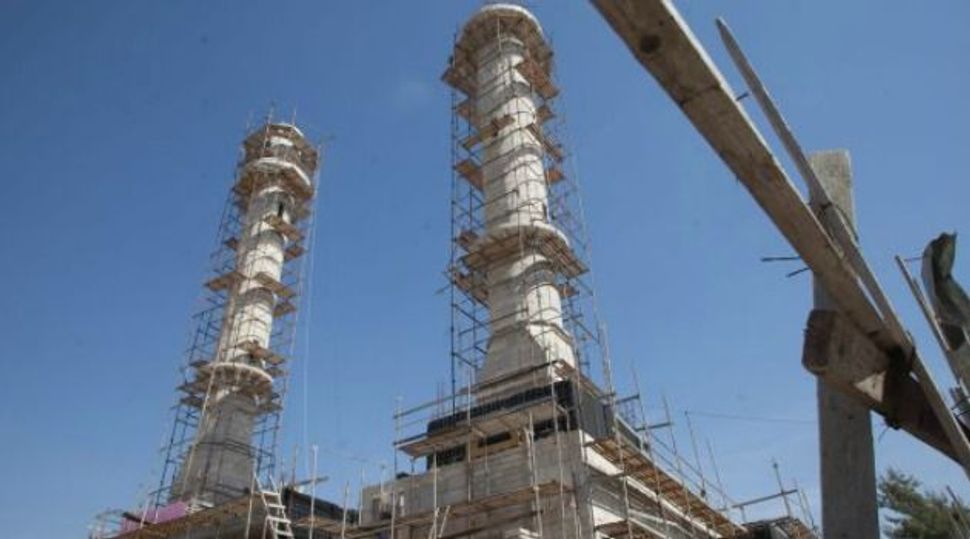 In a Holy Land rich with religious sites, the new Abu Ghosh mosque is rare – as is the hilly village from which it rises.

Bankrolled largely by Chechnya and named after its former leader Akhmad Kadyrov, who was slain by Islamist militants in 2004, the glimmering shrine tells of this small Israeli Arab community’s historical ties to the restive Russian province.

Abu Ghosh residents say their forbears were Chechens who came five centuries ago to then Ottoman-ruled Palestine. With the advent of modern Zionism, the villagers were quick to forge an alliance with the Jewish state founded in the war of 1948.

“We were raised to accept and welcome everyone, no matter what their race or religion,” said Salim Jabr, the former Abu Ghosh mayor and chief fund-raiser for the $10 million mosque.

Eye-grabbingly nestled just off the main Jerusalem-Tel Aviv highway, the building has four minarets – a number typical of mosques in the Caucasus but otherwise unseen in Israel or the Palestinian territories, where one or two is the norm.

The slender spires reach up 52 metres (171 feet) around a gilded dome that sits above a marbled prayer hall capable of taking in 3,000 worshippers. The previous village mosque held only 150, Jabr says – insufficient for a population of 6,500.

Turkish artisans provided woodwork and filigree for the mosque, gratis. There’s a contemporary Israeli touch, too, in the roomy, ventilated bomb shelter built into a lower floor.

Yet conflict has not left much other mark on Abu Ghosh, which also has two monasteries commemorating Christian traditions holding that both Jesus and King Solomon passed through here en route to nearby Jerusalem, the latter bearing the biblical Ark of the Covenant.

Nowadays, weekend pilgrims have to jostle with Israelis who clog Abu Ghosh’s restaurants – one of which won a Guinness record in 2010 for the world’s biggest serving of hummus.

The old road through Abu Ghosh used to connect Jerusalem to the coast, and was used by Jewish and Arab guerrillas who once battled British rule in Palestine – as well as each other.

The village sided with the Jews. “Our leaders took a long view, and understood that Jewish people are really smart and that if they would have a state, it could advance the whole region in terms of economy, industry and culture,” Jabr said.

Geula Cohen, a Jewish underground fighter in the 1940s, said one of the village elders joined and armed her group.

“His ideology was that we had a common enemy in the British and that after they left we could sort out our differences ourselves,” said Cohen, who went on to become an ultra-nationalist Israeli lawmaker.

“Abu Ghosh was like a second home to me.”

Fledgling Israel was high-handed with Abu Ghosh, however.

Jabr says 85 percent of the village’s farmland was seized to make way for new Israeli communities and military camps. Abu Ghosh is now in a legal dispute with a neighbouring ultra-Orthodox Jewish village for control of a British-era fort.

“We’re not giving up on it,” Jabr said. “It’s ours, and it leads right into the heart of our village.”

Arabs, the vast majority of them Muslim, make up one fifth of Israel’s citizens. Many of them identify as Palestinian.

There are seldom such displays in Abu Ghosh. Although exempt from the draft, some of its Muslim youth volunteer to serve in Israel’s army or paramilitary police.

Villagers contributed some funds for the mosque, Jabr said, but 60 percent of the budget came from Chechens who conditioned their donations on the construction of four minarets.

Jewish philanthropy provided a lesson for Jabr’s fund-raising, he said: “Like them, I went to our people abroad to get the necessary financial support.”

Jabr has been to the Chechen capital Grozny 10 times, he said, adding that the republic in Russia’s turbulent Caucasus region had offered citizenship to anyone from Abu Ghosh.

Kadyrov’s son Ramzan, the current Chechen leader, might fly to Israel for the as-yet unscheduled opening of the mosque, a spokesperson for the administration in Grozny said.

The Israeli government last came out in support of Abu Ghosh in June, after vandals struck the village overnight, slashing car tyres and daubing “Arabs out!” on a wall.

Such attacks on Muslim property are often carried out by radical Jews hoping to trigger unrest that would derail any government plan to remove Israeli settlements from occupied West Bank land where the Palestinians seek statehood.

Jabr shrugged off the incident, as well as the prospect the Abu Ghosh mosque could also be targeted for desecration.

“We’re a little worried. Such things don’t look good. But we always hope for the best,” he said.