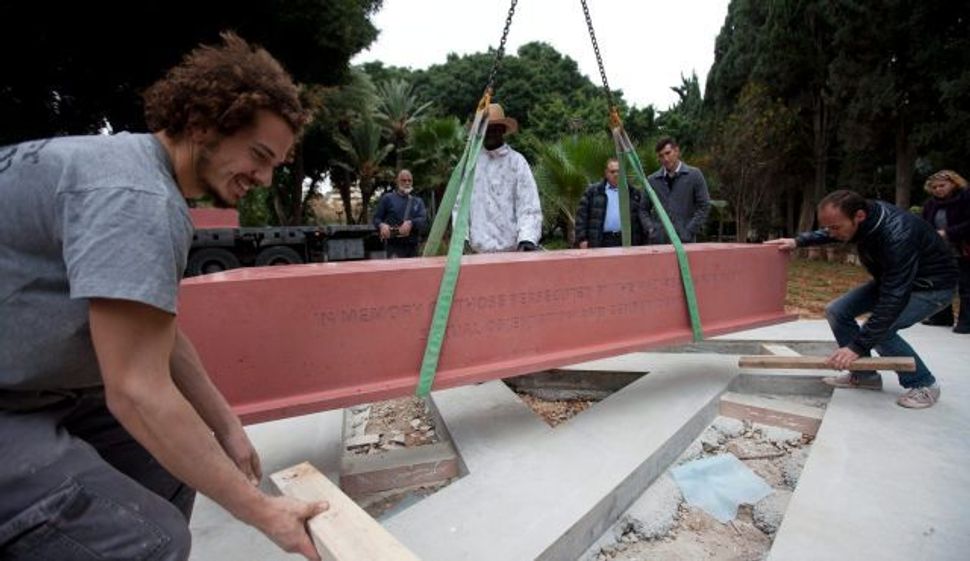 First of Its Kind: The new monument stands in front of the municipal community center for the gay community in Meir Park. Image by Haaretz

Under gray and rainy skies, without fanfare, history was made in Israel on Tuesday with the inauguration in Tel Aviv of the country’s first memorial to victims of the Nazis that commemorates not only their suffering as Jews. After Berlin, Amsterdam, Sydney and San Francisco, Tel Aviv now has a memorial to the thousands of people who were persecuted by the Nazis for their sexual orientation – Jews and non-Jews both.

The memorial stands in front of the municipal community center established in Gan Meir (Meir Park) for the gay community in 2008, ahead of Tel Aviv’s centennial. The driving force behind the memorial, which was established and funded by the municipality, is attorney Eran Lev, an activist in the gay community who was a city councilman for Meretz. “It’s important to me that people understand that persecution of gay people was not the usual story of the Holocaust that we know from the final solution, and from the Wansee Conference. This is a different story, more modest, but still an important one,” he said. “It’s important that people in Israel know that the Nazis persecuted others as well, not because they were Jews, but because they were gay,” Lev said.

The memorial was planned by the landscape architect Prof. Yael Moriah, who has been in charge in recent years of the renovation of Gan Meir. It consists of three triangles – the symbol of the gay community. One is concrete, and on it appears a explanation of the persecution of homosexuals during the Holocaust. The second, which is painted on a concrete triangle, is an upside-down triangle painted pink, of the type the Nazis forced homosexuals to wear. The third triangle faces the other two and consists of three pink benches.

On each of them a sentence is written in Hebrew, English and German: “In memory of those persecuted by the Nazi regime for their sexual orientation and gender identity.”

The inscription states that special steps were taken against gay people and that “according to Nazi ideology, homosexuality was considered harmful to ‘public health.’ The Gestapo had a special unit to fight homosexuals and the ‘Center for the Fighting of Homosexuality and Abortions’ kept a secret file on about 100,000 homosexuals.” The memorial states that gay people were sent to concentration camps and made to wear a patch featuring a pink triangle.

It is difficult to know the precise number of victims the Nazis persecuted for their sexual orientation. Zimmermann notes that the text on the memorial states that 15,000 such people were sent to the camps and more than half were murdered. He adds that medical experiments were carried out at Buchenwald concentration camp to “cure homosexuality.” The memorial cites the names of prominent Jewish homosexuals, including the sexologist Magnus Hirschfeld, an anti-Nazi activist who was persecuted, and Gad Beck, who saved the lives of many Jews in Berlin, and who died in the German capital last year.