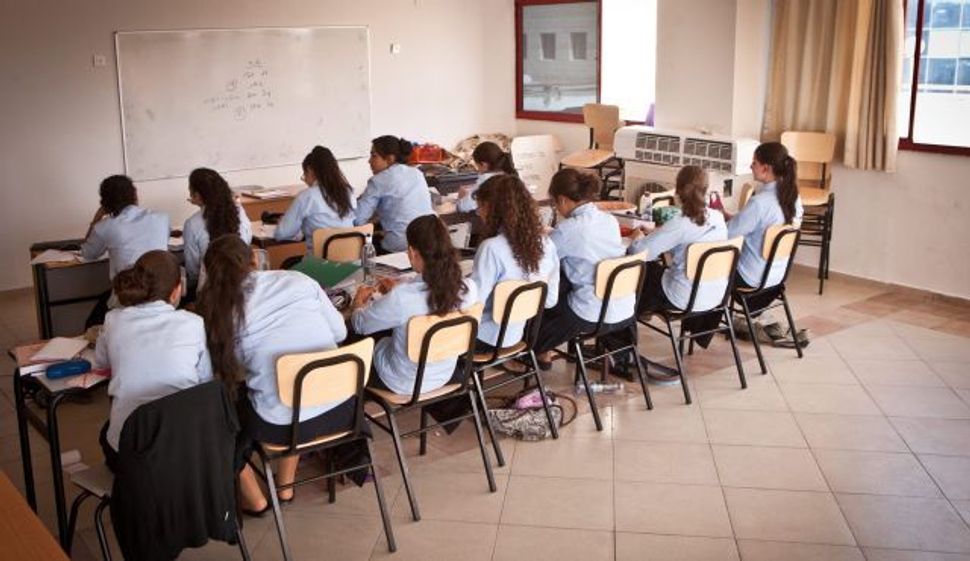 Esther is a 22-year-old graduate of an unusual makeup course. It is designed for ultra-Orthodox girls and women who have been removed from their homes due to sexual or other violence.

“The course gave me the strength to understand that I can do things well,” says Esther, who was initially opposed to taking any course, but now hopes to work in the field.

The course is part of a project launched by the Public Security Ministry and the Bnei Brak boarding school, Shtilim, four years ago in an effort to give these Haredi women tools to readjust in society.

Ultra-Orthodox women in Israel are most likely to be victims of sexual assault because they tend to live in poorer areas in which a woman is four times as likely to be sexually assaulted, according to a recently released Public Security Ministry report.

“The girls who come to us are taken from their homes by social services between the ages of 6 and eighteen,” says Reuven Glassner, the head of the school. “These are girls whose parents were dysfunctional, and who lived in harmful environments where the families offered no protection.”

The school – in which the young women study cooking, hairdressing or cosmetics – opened in 2009 with 15 girls. Currently, there are over 45 girls there, and only a lack of space prevents more from moving there. Graduates get government certificates recognizing them as professionals, qualified to work in their respective fields.

“My goal is to prevent these girls from ending up in bad places. These are girls who have experienced physical and sexual violence,” says Avital Leibe, Tel Aviv regional director of the Ministry’s Community and Crime Prevention Division – Metzila. “Their lives have not been easy, and we, with our special programs, have managed to help them go from having a poor self-image, to realizing that they are worth something.” Aside from professional training, the programs’ administrators are trying to give the girls other values as well. Cooking courses, for example, were inspired by a similar initiative made by British chef Jamie Oliver. “Cooking teaches them to give back, and respect others,” said one of the program’s administrators.

The makeup course was also not chosen by chance. “The idea is to help these girls find careers, but no less important the idea is to help these young women believe in themselves, to love themselves,” says Zahava Weizman, who runs the course. “The girls start to get to know themselves all over again. They were in the lowest of places, and this course helps reconnect them to their femininity, and their inner selves.”

“To stand up and say ‘I was beaten,’ and by a family member, is still very difficult in Haredi society. There is still the feeling that women are second class citizens,” says Noah Korman, director of Bat Melech, an organization that runs shelters for battered ultra-Orthodox women. “Roughly 60 women pass through our shelters a year,” says Korman. “We get about 100 calls a month from Israeli women of all ages, but no one knows how many battered women there are, and how much they suffer from violence. The problem is that they still don’t report these acts like they do in secular society.”

“There is very successful cooperation with Haredi leaders on these issues,” says Police Chief Superintendent David Miskin, an investigator in the Dan region that includes Bnei Brak. “They come to us, and help us investigate these cases. Currently, there are common interests to publicly condemn people who carry out these acts.”

Women in periphery at greater risk

According to a Public Security Ministry report submitted earlier this month, a woman in Israel is more likely to be a victim of a sexual assault if she is under age 25, lives in a town that ranks low on the socioeconomic scale and resides in the periphery.

The report of violent crime against women in 2012 found that there were 5,085 cases of sexual assault reported that year, a 10 percent increase over 2011. The 2012 assaults included 1,380 cases of rape. The most common sexual assault were acts of indecency, over 3,000 cases of which were reported last year.

The report also indicates that over half the cases were dismissed, with roughly 2,000 being passed on to prosecutors for indictments.

The document also reported on the amount of sexual assaults that took place against women in relation to the distance of their residence from Tel Aviv. A woman living in the periphery is three times as likely to be the victim of sexual assault. Living in a poor area quadruples a woman’s risk of being sexually assaulted.

Increase in assaults at school

Last year there were 279 reports of sexual assault at educational institutions; over half involved a minor and 106 of these cases took place at elementary schools, according to the ministry figures. This is a 45 percent increase in sexual assaults against minors in educational institutions compared to 2007, according to the Association of Rape Crisis Centers in Israel.

This story first appeared on Haaretz.com.