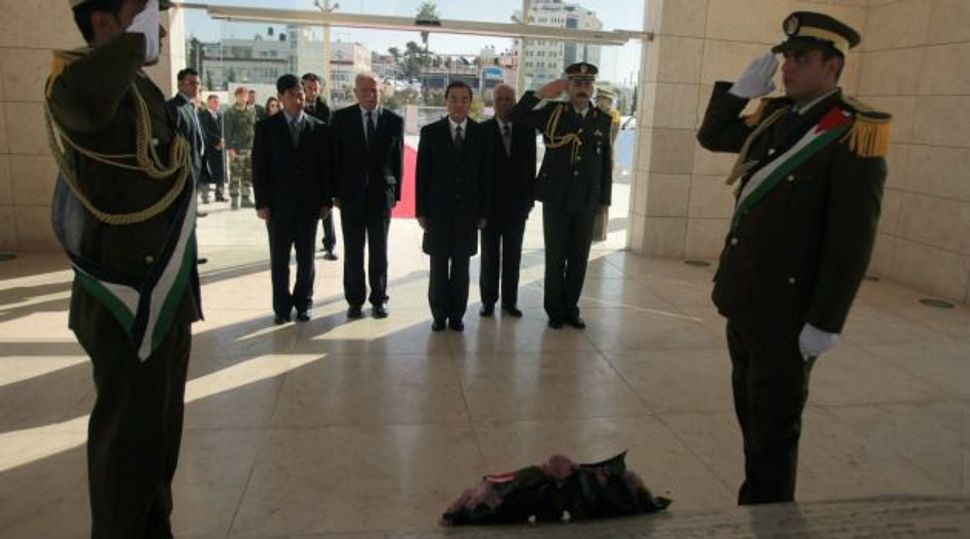 Palestinian president Mahmoud Abbas’s elite guard unit surrounded parliament in the West Bank city of Ramallah on Wednesday to protect a legislator from being attacked by another senior official, witnesses said.

The incident was one of the most public confrontations between senior members of the Fatah party led by Abbas in years, and may deepen concerns over stability as Palestinians engage in peace talks with Israel for a state.

Around the same time, unknown gunmen opened fire on the offices of the Palestinian minister for Islamic endowments, said officials. It was not clear if the incidents were related.

Jamal Abu al-Rab, a parliamentarian, and Jibril Rajoub, a top Fatah official and a former major general in the security forces, were among VIPs at a Ramallah hotel, welcoming Chinese foreign minister Wang Yi on a visit.

Abu al-Rab – a former militant leader from the Fatah-aligned al-Aqsa Martyrs Brigades in the city of Jenin, widely known by the nom de guerre “Hitler” – slapped Rajoub in the face, witnesses said.

Al-Rab then fled and Rajoub summoned his armed guards to pursue him, said witnesses. Al-Rab sought refuge in the parliament building and Abbas’s forces formed a cordon around it, sources told Reuters on condition of anonymity.

Both men travel with well-armed entourages.

It is not clear what provoked the blow or the armed assault on the minister’s office. A spokesman for the Palestinian security forces told Reuters it was investigating the incidents.

As officials in the West Bank have largely forsworn violence against Israel in recent decades, many former militant and activist leaders have had to adjust to civilian politics. But old rivalries are often maintained in their new roles.

Palestinians have lacked an elected government since Abbas’s Fatah party and the Islamist Hamas group fought a brief, bloody civil war in 2007 when Hamas seized control of the Gaza Strip after a surprise win in legislative polls the previous year.

As prospects for a peace deal remain dim and economic hardships bite, many Palestinians have accused officials of corruption and infighting.

More than half of Palestinians said their government was a “burden on the Palestinian people,” in a June poll by the Palestinian Center for Policy and Survey Research. In the same survey, 77 percent of respondents believed there was corruption by officials in the West Bank, where Fatah holds sway, and 61 percent in the Gaza government, run by Hamas.