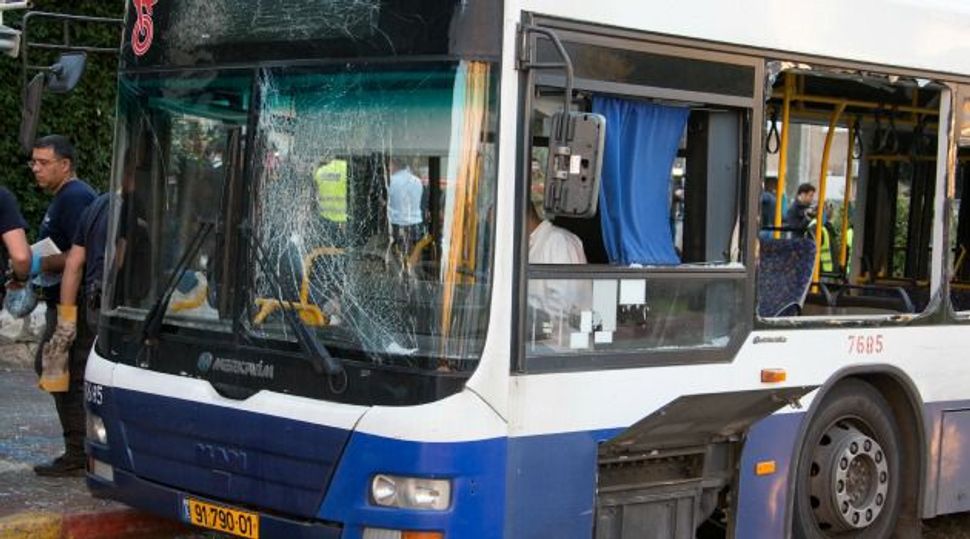 A bomb that Israeli authorities suspect was planted by Palestinian militants exploded in a bus near Tel Aviv on Sunday after passengers were evacuated, and police said no one was hurt.

“There were about 12 passengers on the bus. The driver stopped immediately when he was alerted to a suspicious object. It was a bag on the back bench, and he immediately ordered everyone off,” Eitan Fixman, a spokesman for the Dan bus company, was quoted as saying on the YNet news site.

Photographs from the scene, in the Tel Aviv suburb of Bat Yam, showed the blast blew out the vehicle’s windows.

“It seems that the bomb that exploded on a public bus near Tel Aviv was indeed a terrorist attack,” Ofir Gendelman, a spokesman for Prime Minister Benjamin Netanyahu, said on Twitter.

There was no immediate claim of responsibility for the blast, the first such incident since Israeli-Palestinian peace talks – which have shown few signs of progress – resumed in July.

Violence in the West Bank has increased in recent months, and at least 19 Palestinians and four Israelis have been killed in the occupied territory since the negotiations got under way after a three-year break.

Police said one of its bomb experts was at the scene when the bag blew up, but that no one was injured. Israeli media reports said one person was slightly hurt.

The last time a bomb exploded on an Israeli bus was in November 2012, when 15 people were wounded near the Defence Ministry compound in Tel Aviv. An Israeli Arab pleaded guilty earlier this month to planting the bomb and said it was for political reasons