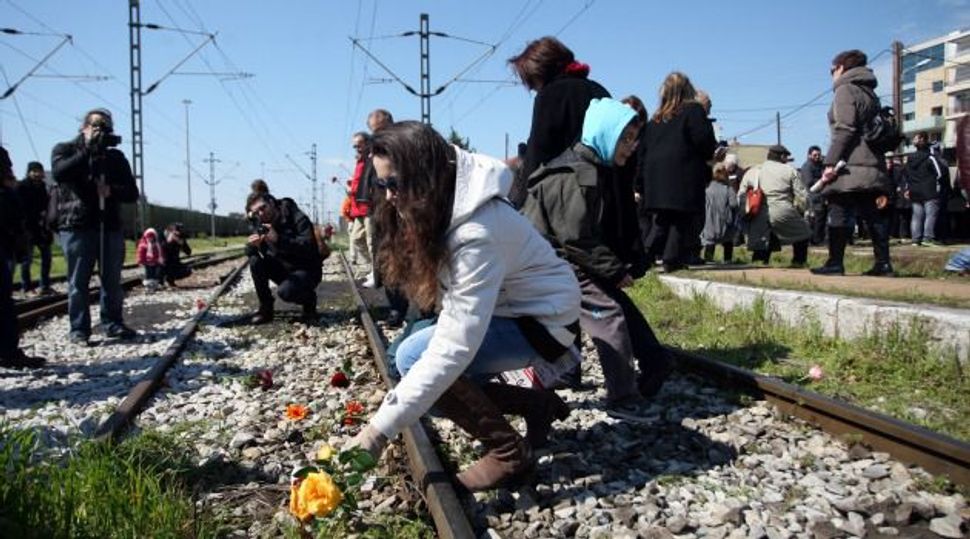 Always Remember: Participants in a ceremony marking the 70th anniversary of the deportation of Jews from Greece toss flowers on the railroad tracks in the city of Thessaloniki. Image by getty images

The northern Greek city of Thessaloniki will build a Holocaust research center at the site where some 50,000 of the city’s Jews were deported to Nazi death camps.

The agreement to establish the Memorial Center on Holocaust Education Remembrance and Research at the city’s old railway station was signed among the Thessaloniki Jewish community, the city and the Greek transport ministry.

The Jewish community of Thessaloniki was one of the most important centers of Sephardic Jewry for 450 years following the expulsion from Spain. Known as the Flower of the Balkans, it was the center of Ladino culture in the region.

In March 1943 the Nazis began sending Jews in railway convoys to the Auschwitz-Birkenau death camp. By August, 49,000 out of the city’s pre-war population of 55,000 Jews had been deported. Fewer than 2,000 survived.

“This is the fulfilment of a historic responsibility for Thessaloniki,” city Mayor Yiannis Boutaris told reporters at the signing Friday.

Boutaris has been instrumental in acknowledging the city’s rich Jewish history and the extent of its devastation. Earlier this year he organized a public march to commemorate 70 years since the first deportations, the first such display by the Jewish community since the end of the war.

The Thessaloniki Jewish community said the project was a long-held dream and particularly important at a time when Greece is struggling to deal with the neo-Nazi Golden Dawn Party which has 18 seats in parliament.

“At a time when anti-Semitism and extremism are on the rise throughout Europe, this project will help educate the society, strengthen the collective memory and help combat the phenomena that in the past led humanity to its darkest era,” a Jewish community statement said.