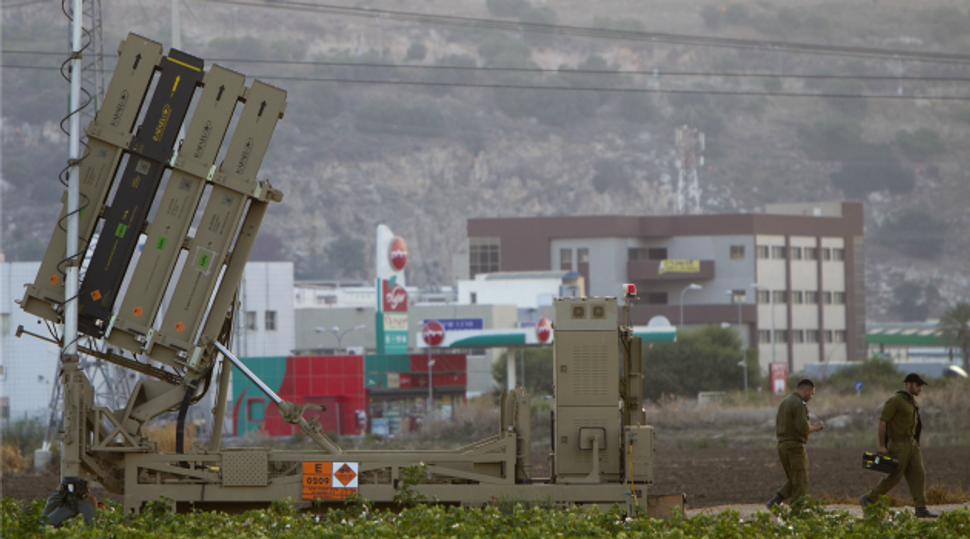 At least five Katyusha rockets were fired from Lebanon at northern Israel.

Two of the rockets fired Sunday morning exploded near the northern town of Kiryat Shemona; others reportedly landed in Lebanese territory. No injuries or damage were reported in Israel.

The Israeli military returned fire in the direction of the rocket launches.

“This morning’s rocket attack is an inexcusable & blatant breach of #Israel‘s sovereignty. We maintain the right to self defense,” the Israel Defense Forces Spokesman’s Office tweeted shortly after the attack.

No group has claimed responsibility for the attack.

“Today, the IDF responded quickly and forcefully to the rocket fire from Lebanon,” Israeli Prime Minister Benjamin Netanyahu said Sunday at the start of the weekly Cabinet meeting. “This is our policy regarding Lebanon just as it is with the Gaza Strip. We will not allow a drizzle and we will respond strongly, and if need be, will carry out preventive action.”

Netanyahu said that Israel holds the Lebanese government responsible for the firing of rockets from within its borders. He said that the terrorist organization Hezbollah is “perpetrating two war crimes simultaneously” by firing rockets at Israeli civilians, and using Lebanese citizens as human shields. “We also know that Iran, of course, is behind this arming by Hezbollah,” Netanyahu added.

“We will not tolerate fire from Lebanese territory and will not allow any force to disrupt the lives of Israeli citizens,” Defense Minister Moshe Ya’alon said, adding that Israel would respond to such attacks with force.

Maj.-Gen. Paolo Serra, Force Commander of the United Nations Interim Force in Lebanon, or UNIFIL, called on both sides to exercise “maximum restraint” to prevent an escalation of the situation.

“This is a very serious incident in violation of U.N. Security Council resolution 1701 and is clearly directed at undermining stability in the area. UNIFIL’s first imperative is to ensure that there is no further escalation of the situation and I have been assured by the parties of their full cooperation with UNIFIL in this effort and of their continued commitment to the cessation of hostilities,” Serra said in a statement.

Rockets were last fired at Israel from Lebanon in August. Earlier this month, an Israeli soldier was killed near an Israeli army post at Rosh Hanikra in Israel’s north by a rogue Lebanese soldier, who fired as many as seven shots from a pistol, at reasonably close range.