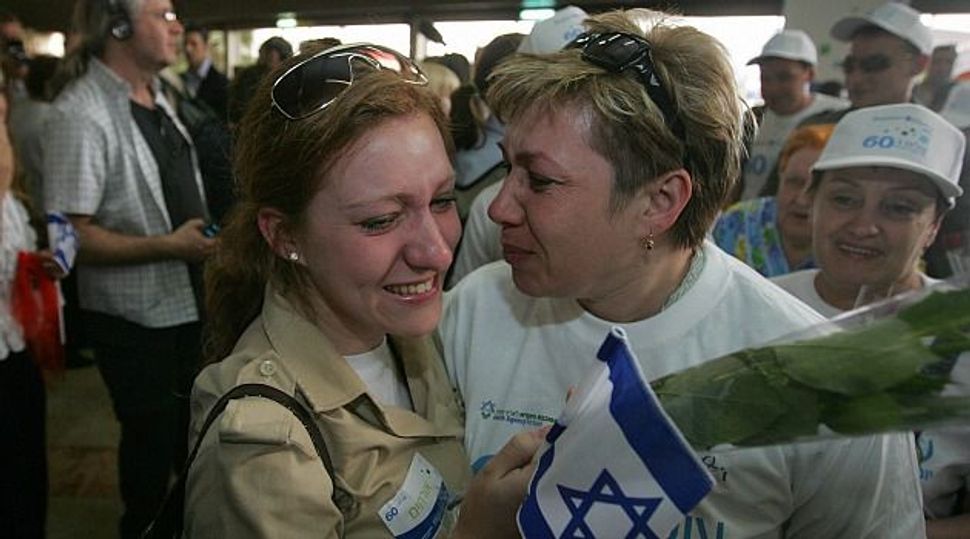 Welcome: Russian immigrant is met by relatives in Israel. Image by getty images

(JTA) — Growing up in the Urals, Pavel Polev was a precocious ice skater and a member of the Soviet Union’s national youth figure-skating team.

But in 1992, at age 15, Polev’s life was upended when he joined the massive wave of Jews immigrating to Israel from the crumbling Soviet Union. After serving a mandatory three years in the Israel Defense Forces following high school, Polev took a job as a custodian.

Two decades later, Polev is a successful small-business owner and rising politician. He runs an air-conditioning store and serves as deputy mayor of Ariel, the Israeli West Bank settlement city home to a large Russian-speaking population.

“It’s impossible to compare now with the situation 22 years ago,” said Polev, a member of the Russian immigrant-founded Yisrael Beiteinu party.

Polev’s immigrant success story resembles those of many of the 1 million Russian-speaking immigrants who arrived in Israel in the 1990s. Along with their descendants, Russian speakers now comprise nearly one-fifth of all Israelis.

Unlike other immigrant groups that moved en masse to Israel only to find themselves poor and socially marginalized, two decades on Russian aliyah is by many metrics a story of resounding success. The Russian influx has had a palpable impact on Israeli society, from the countless storefronts with signs in Cyrillic characters to the many Russian-speaking immigrants who have assumed critical roles in the highest echelons of Israeli politics.

Though many Soviet immigrants, especially older ones, still face poverty and significant cultural barriers, overall statistics show a community on the rise. According to a 2013 report by the Adva Center, an Israeli social policy think tank, 56 percent of Russian immigrants in 1992 were in the poorest third of Israeli society – below the poverty line or at risk of poverty. By 2010, the figure had dropped to 38 percent. Over the same period, the percentage of Russians in the upper third of Israeli earners grew from 10 to 27 percent.

“With any group of new immigrants in any country you won’t find such a huge success,” Natan Sharansky, the famous Soviet refusenik who now serves as chairman of the Jewish Agency for Israel, told JTA. “If you look at service in the army, at medicine and science, you can see how deeply it’s entering Israeli society.”

Russian immigrant success stands in marked contrast to the ongoing challenges faced by Ethiopian immigrants, who arrived in Israel in large numbers at around the same time. More than half of Ethiopian Israelis live below the poverty line, according to the Adva report. Ethiopians also lag the broader Israeli public in education and and have salaries about one-third lower than the average Israeli.

The Russian success owes at least in part to the education and skills that enabled them to succeed in an modern economy. Ethiopians emigrated from an agrarian subsistence economy and have struggled to adjust their traditional lifestyles to a Western society.

“The education there was at a high level,” said Chen Bram, an expert on Russian Jewry at Hebrew University’s Truman Institute. “So their ability to direct themselves was very high.”

Russian success is all the more startling considering how ill-prepared Israel was to absorb them when they first arrived. At the time, stories abounded of highly trained Russian scientists forced to take jobs cleaning streets.

“They got here and they felt that there was no one who was caring for them,” said Betzalel Shif, a law professor who immigrated from Tashkent, a Soviet city in Uzbekistan, in 1971. “Thank God they understood how to survive in Russia and survive here.”

The party merged with Israeli Prime Minister Benjamin Netanyahu’s Likud party in 2003, helping to cement the mounting political influence that has been a hallmark of Russian success and another distinguishing feature of Russian integration.

Moldovan-born Foreign Minister Avigdor Liberman’s Yisrael Beiteinu party, a faction that also counted Russian immigrants as its primary constituency, won 15 seats in the 2009 elections before joining lists with Likud last year. Liberman is one of two Russian-speaking ministers and one deputy minister in the governing coalition, compared to just two Ethiopians in the entire Knesset.

Polev said Yisrael Beiteinu has passed the stage of appealing only to narrow Russian interests and is now aiming to present itself as a mainstream party – a shift that also speaks to the success of Russian integration. In their first years in Israel, Russian politics focused largely on securing government support for communal priorities. Now Russians are beginning to deal with the consequences of their successful integration.

“There are some kids who grow up here and feel bad about their Russianness, they want to forget their language,” said Alexey Tashaev, an organizer of the Russian Israeli youth organization Fishka. “That’s a problem. On the other hand, some don’t identify with Israel.”

Even as the community grows more successful, challenges remain for elderly Russians and those living in Israel’s economically disadvantaged periphery. Nadezhda Tatarenko, 70, who moved from the Ukraine at 47, said that older immigrants often do not receive all of their government benefits and encounter disrespectful conduct at government offices.

But as the Russian community continues to integrate, she added, such challenges likely will become a thing of the past.

“For a long time there will still be a difference between people without roots here and people who do have them and who know their rights,” said Tatarenko, the founder of the nonprofit Immigrants for a Successful Absorption. “Now we have the third generation, and they’re Israeli. I don’t see many differences between them and sabras.”