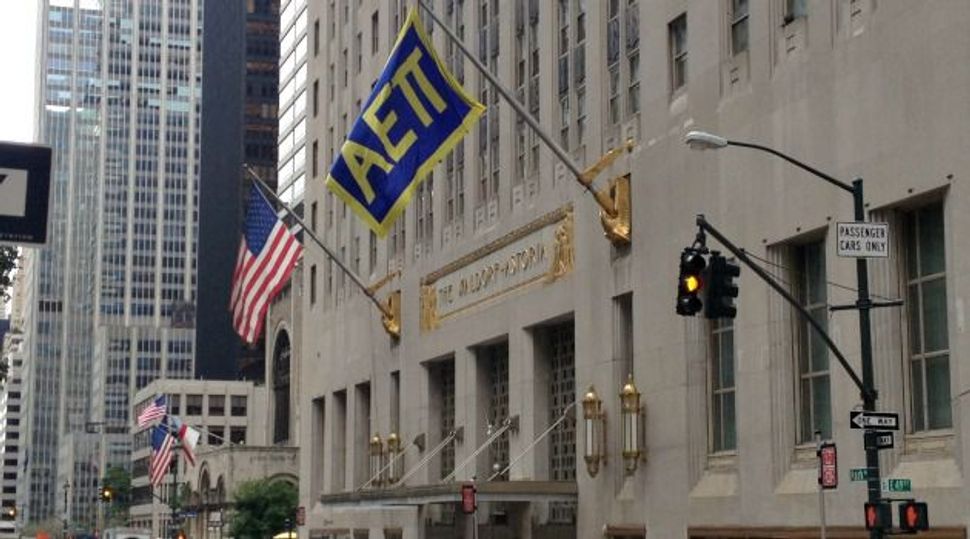 The Jewish fraternity Alpha Epsilon Pi has become a member of the Conference of Presidents of Major American Jewish Organizations.

The members’ vote to admit AEPi came after a unanimous recommendation by the Presidents Conference membership committee.

“This is recognition by the Conference member organizations of the need to engage future leaders of our community and to give them a voice in our deliberations,” Presidents Conference Chairman Robert Sugarman and CEO Malcolm Hoenlein said in a statement.

“AEPi is a remarkable organization with affiliates on campuses across the country and provides an array of educational and advocacy training programs. We have seen first-hand not only the quality of the members but also their commitment to promoting Jewish involvement and Israel on campus.”

Last August, AEPi made Hoenlein a fraternity brother at AEPi’s 100th anniversary dinner at the Waldorf Astoria Hotel in New York. The ceremony did not include prolonged hazing.

On Monday, AEPi’s international president, Elan Carr, and executive director, Andrew Borans, hailed the fraternity’s admission to the conference as a step toward making “an even greater impact on Jewish identity, Jewish leadership and Israel advocacy.”

“AEPi’s proven track record of Jewish leadership, philanthropy, and unequivocal support for the State of Israel will be an important asset for the Conference,” they said.

The Conference of Presidents has come under fire on occasion from some of its own members for promoting overly hawkish views on Israel-related issues or taking positions that were not voted on by members.

The most recent such complaint came on Dec. 23, when Americans for Peace Now complained that a statement welcoming the U.S. Senate’s new Iran sanctions bill did not represent Presidents Conference consensus and should not have been sent out in the name of members.

“Reacting to a piece of legislation that is so controversial, concerning an issue that is so delicate, requires some internal process, some soliciting of feedback from CoP member organizations,” Americans for Peace Now wrote in a letter to Hoenlein and Sugarman, using shorthand for the Conference of Presidents. “To the best of our knowledge, there was no such process.”

Hoenlein did not return a call from JTA seeking comment.

J Street, a left-wing pro-Israel advocacy organization, has its own membership application pending before the Presidents Conference, according to Alan Elsner, J Street’s vice president for communications.