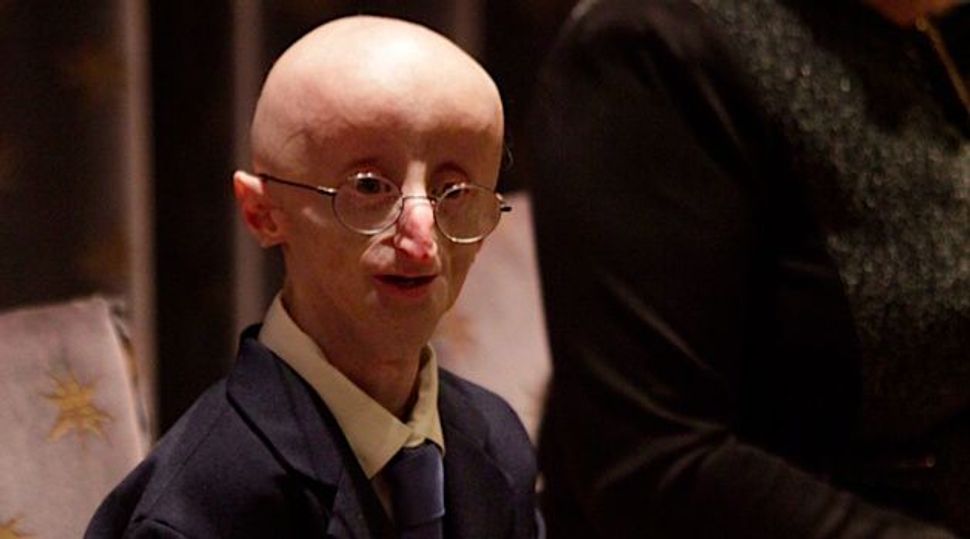 A Boston-area Jewish teen whose fight against a rare genetic disease that causes accelerated aging was chronicled in an Academy Award-contending documentary has died.

Sam Berns of Foxborough, Mass., died Friday after a lifelong battle with progeria. He was 17, three years older than the typical life expectancy for children with the disease.

Sam came into the public eye through the documentary film “Life According to Sam,” which was broadcast last October on HBO. The film is on the shortlist for an Oscar nomination. It was voted best documentary at the 2013 Boston Jewish Film Festival and has been screened at Jewish film festivals across the country.

Robert Kraft, a philanthropist who supports numerous Jewish causes and is owner of the New England Patriots, took a personal interest in Sam, an avid sports fan who was scheduled to serve as honorary captain at Saturday night’s New England Patriots playoff game. Instead, a moment of silence was held in his memory.

“I loved Sam Berns and am richer for having known him,” Kraft said in a statement. “He was a special young man whose inspirational story and positive outlook on life touched my heart.”

In October, prior to the HBO broadcast, Kraft made a $500,000 matching donation to the Progeria Research Foundation to further its hunt for treatment and a cure. The foundation was started in 1999 by Sam’s parents, Leslie Gordon and Scott Berns, both doctors, after Sam, then a toddler, was diagnosed with the condition.

The foundation’s research team made quick progress in isolating the gene that causes the condition and has since developed a drug treatment that has prolonged the lives of children such as Sam.

Last month, Sam was featured at a TED (Technology, Entertainment, Design) talk — a global set of conferences owned by the private nonprofit Sapling Foundation — speaking on “My Philosophy for a Happy Life.”

“Even though there are many obstacles in my life, I don’t want people to feel bad for me,” he said there.

It was a sentiment that ran through his life, according to those who knew him.

Rabbi Harold Kushner lost his son Aaron to progenia, prompting him to write the bestselling book “Why Bad Things Happen to Good People.”

In a statement confirming Sam’s death last Friday, the Progeria Foundation wrote, “The entire PRF community mourns the loss of this remarkable young man who not only inspired PRF’s creation, but also touched millions of people worldwide.” Condolence messages and words of admiration for Sam are filling social media sites.