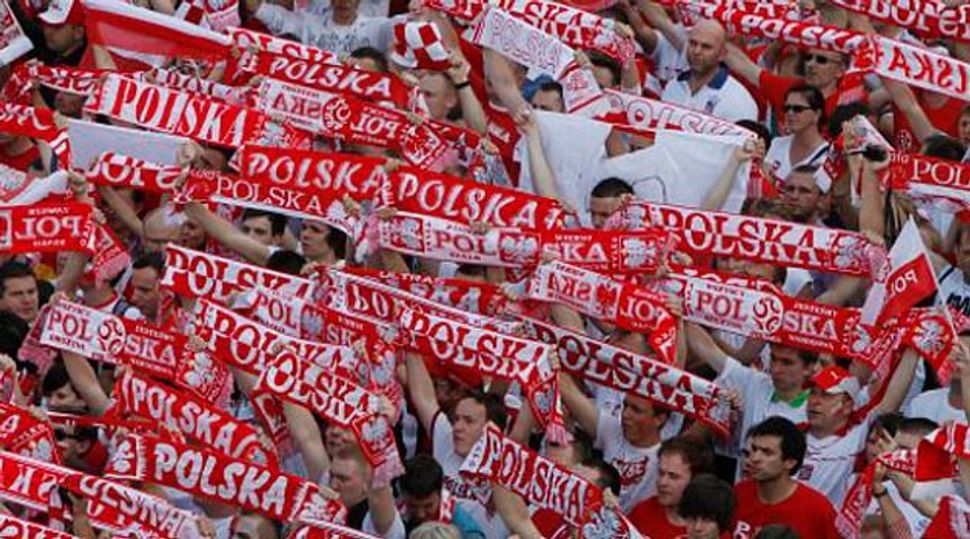 Several Jewish organizations have criticized a Polish prosecutor’s decision not to try soccer fans who chanted about Jews and Auschwitz.

A spokesperson for the prosecutor’s office of Poznan in central Poland said last week that no charges would be brought against the fans because they did not mean to offend Jews when they chanted the slogans, according to a Jan. 9 report by the Glos Wielkopolski daily.

The spokesperson, Magdalena Mazur-Prus, was referring to chants that happened at a match in September between the Lech Poznań team and Widzew — a club from the city of Lodz whose population was one-third Jewish before the Holocaust.

But the Poznan prosecutor’s office decided to drop charges because the chants were directed at fans, not Jews, and therefore were not intended as incitement to racial hatred, according to Mazur-Prus. “Of course, such cries are reprehensible and unacceptable, but not every wrongful conduct is a crime,” she said.

In a statement Tuesday, the president of the European Jewish Congress, Moshe Kantor said in a statement that he was appalled by the decision.

“Unfortunately, extreme anti-Semitic chants like those in Poznan are regularly heard in many European stadiums, including in England and Holland, and the reaction of the authorities is minimal,” Kantor said, adding that this case and others “demonstrate that anti-Semitism has become the last acceptable prejudice in football.”

Abraham Foxman, national director of the Anti-Defamation League, urged the Polish government to intervene and overturn the municipal prosecutor’s decision.

“Responsible government officials must rectify this absurd decision and ensure that those who chose to insult the memory of the victims of the Holocaust are held responsible for their pernicious and illegal actions,” he said in a statement.