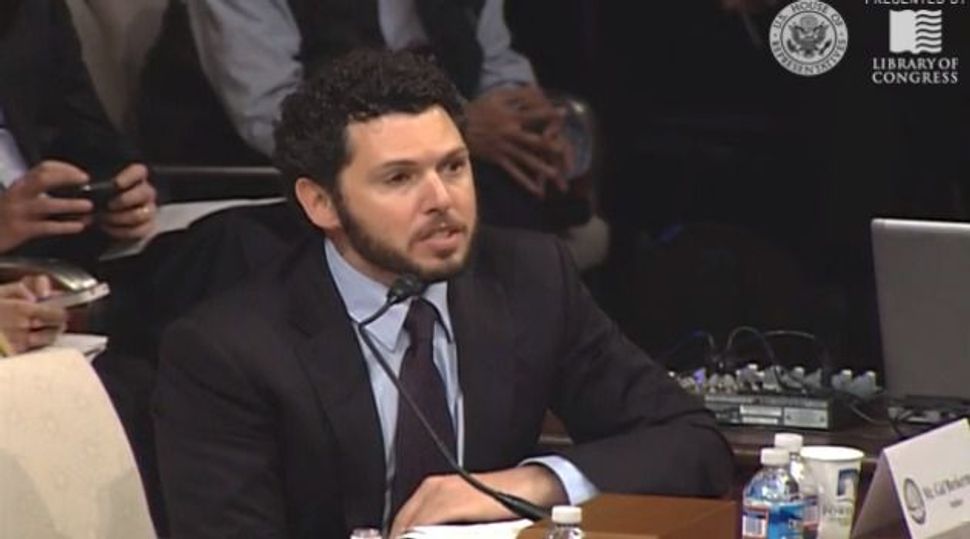 Natan Sharansky joined Forward opinion editor Gal Beckerman and the relatives of political prisoners in asking the U.S. Congress to speak of their loved ones during meetings with foreign officials.

Sharansky, imprisoned by the Soviets for nine years because of his activism on behalf of Soviet Jews who wanted to emigrate, recalled at a hearing Thursday that his jailers told him, “You are in our hands. If you disappear, no one will notice.”

Instead, Sharansky told Congress’ Tom Lantos Human Rights Commission, thousands of activists wrote letters, attended marches and wore bracelets in support of Jewish refuseniks. Sharansky, who now chairs the Jewish Agency for Israel, said he believes he was finally freed because of these activists, according to a Washington Jewish Week report.

Keeping these prisoners in the news is key, he said as he urged Congress members to speak of specific political and religious prisoners whenever they meet with the leaders of the country in which they are imprisoned.

Sharansky and the other speakers said it was important for U.S. ambassadors to frequently ask about the fate of any political prisoners in that foreign country and hold a press conference whenever they are denied the right to meet with a prisoner.

Commission chairman Rep. Frank Wolf (R-Va.) suggested that those working to free political and religious prisoners use Gal Beckerman’s book, “When They Come for us We’ll be Gone: The Epic Struggle to Save Soviet Jewry,” as a model for activism.

“If you think the Congress and the administration will save you, you are sadly mistaken,” Wolf said, explaining that a groundswell of support worldwide is what is needed. Beckerman, who also testified during the hearing at the Capitol Visitor’s Center, said the Soviet Jewry movement was successful because it combined “a tribal motivation” to help one’s own people with a general sense of outrage that someone was being imprisoned for their beliefs.

Countries holding political and religious prisoners that were discussed at the hearing include Bahrain, China, Iran, Nigeria, Pakistan, Russia, Saudi Arabia and Vietnam. The commission is named for the late Lantos, the only Holocaust survivor elected to Congress, and whose hallmark was human rights advocacy.