The Economist Pulls ‘Anti-Semitic’ Cartoon on Barack Obama and Iran 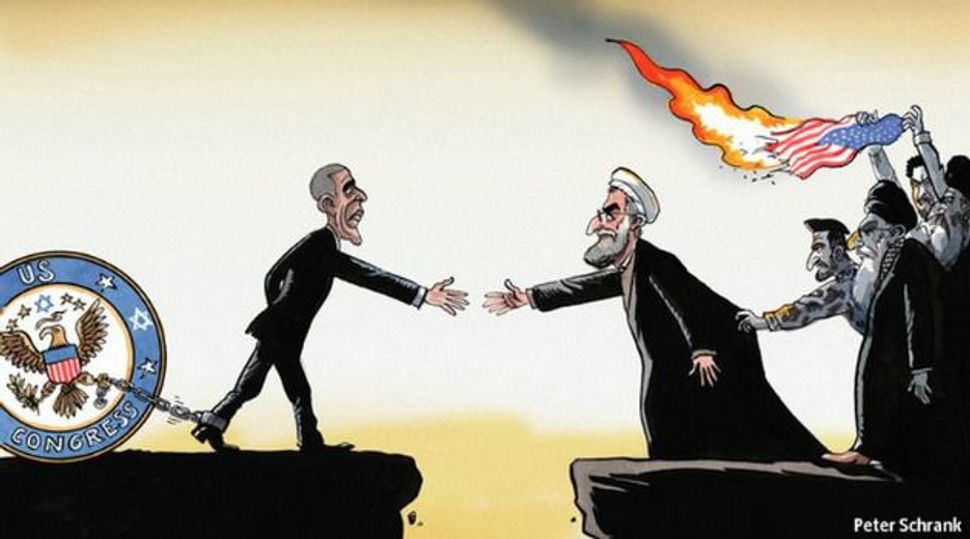 The Economist removed a cartoon from an article on its internet edition that has been characterized as anti-Semitic.

The cartoon was removed Tuesday from the weekly publication, where it ran alongside an article published on Jan. 18. The cartoon appears in the print edition of the magazine.

An editor’s note appended at the end of the article titled “Negotiating with Iran: A Big Gap to Close,” about the difficulties between the United States and Iran over negotiating changes to Iran’s nuclear program, read: “The print edition of this story had a cartoon which inadvertently caused offense to some readers, so we have replaced it with a photograph.”

The cartoon shows President Obama with a leg shackled to the seal of the U.S. Congress, which is covered with Stars of David. He is reaching out to shake the outstretched hand of Iranian President Hassan Rouhani, who is followed by extremists burning an American flag. The cartoon seems to indicate that Congress is run by Jews or Israel.

The Anti-Defamation League called on the Economist to issue a “full-throated apology” for publishing the editorial cartoon.

“The Economist cannot repair the damage of publishing an anti-Semitic image with only half-measures. They owe their readers a full-throated apology, which not only acknowledges the offensive nature of the cartoon but explains to readers why this image implying Jewish control was so outrageous and hurtful,” ADL National Director Abraham Foxman said in a statement.

“The Economist already has a credibility problem when it comes to Israel. The fact that this cartoon passed editorial muster without raising red flags raises serious questions about its editorial judgment and the possibility of a more deeply ingrained bias against the Jewish State,” he concluded.

The Economist Pulls ‘Anti-Semitic’ Cartoon on Barack Obama and Iran