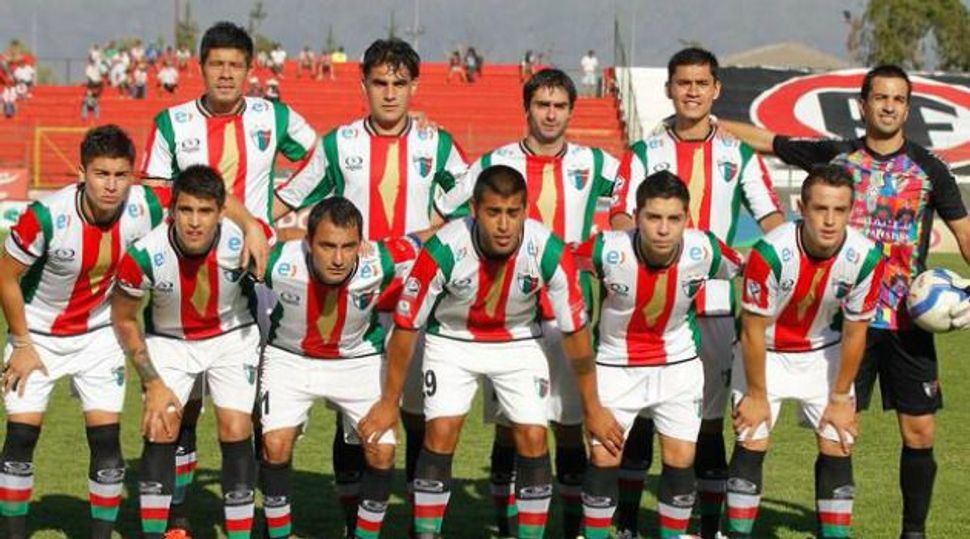 Chile’s Palestine Football Club unveiled its new uniforms, which show the entire map of Israel as Palestine on the front of the shirt.

Inset into the players’ numbers on the backs of their uniform shirts also are small maps of Israel.

The uniforms, worn Sunday in a match against Universidad de Concepcion, replace the old uniforms in which the number one in players’ numbers in the backs of their shirts were represented by the map.

Chile’s top soccer league, the National Association of Professional Football of Chile, or ANFP, on Jan. 20 by unanimous decision fined the team for the old uniforms. The ANFP also ruled that the team, which wore the jerseys in three games this month, must redesign the uniforms to include numerals for player numbers.

The ANFP in punishing the Palestine team said it was opposed to “any form of political, religious, sexual, ethnic, social or racial discrimination.”

The decision followed a request by Patrick Kiblisky Fried, the Jewish president of Chile’s Deportivo Nublense SDAP club, which plays in the same league.

The new uniform is shown in a photo at the official Facebook page of the soccer club. In its first hours online, the post of that photo received 327 likes and 73 comments, nearly half of them wanting to buy the new shirt and also the banned one.

“The fact that the Palestinian Soccer Club chose to keep the map of Israel on their shirt, claiming all of it as Palestinian Territory, provides further proof that the ideology of the leaders of the Palestinian community of Chile is very extremist, and it is based on the denial of all connection of the Jewish People with the land of Israel,”

Maximiliano Grass, director of the Chile-Israel Council, the Zionist Federation of Chile, told JTA. “As a matter of fact, even when they cannot use the previous shirt any more, they’ve taken advantage of media coverage to sell more than 7,000 of them around the globe. With this kind of attitude, it is very unlikely that we are able to reestablish constructive dialogue with the local Palestinian community any time soon,” he added.

The shirts debuted on Jan. 4 in the first match of the season, against the Chilean Everton team, which the Palestine team won. In the last match, against Universidad de Concepcion the Palestine team also won, and is tied for first place in the league with the Colo-Colo team.

The club was founded in 1920 by Palestinian immigrants to Chile. The Palestinian community in Chile is believed to be the largest outside of the Middle East. At least 300,000 Chileans are of Palestinian descent, according to reports.