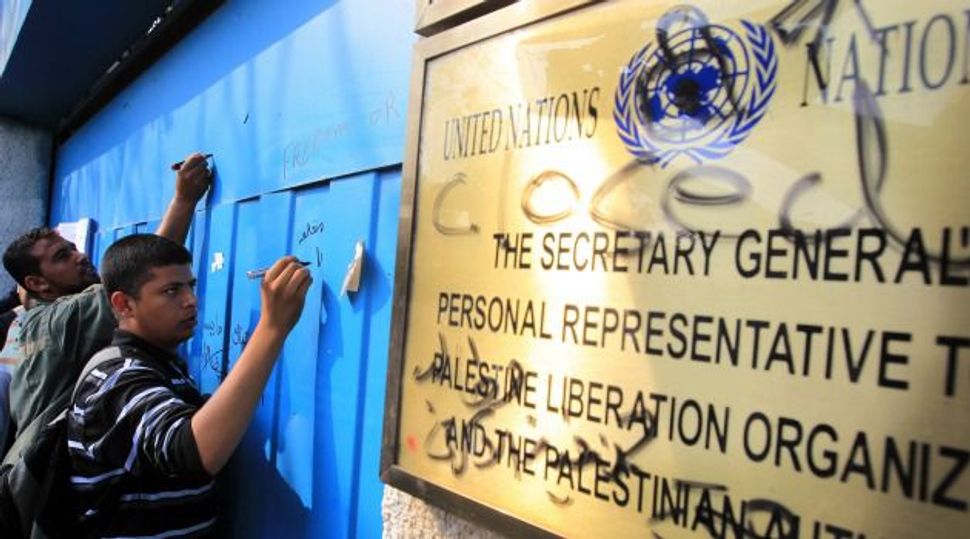 Palestinian youths write on the walls of the the UNESCO headquarters in Gaza. Image by Getty Images

An opening date has been set for a previously postponed exhibition at UNESCO headquarters on the Jewish presence in the land of Israel.

The Simon Wiesenthal Center announced Tuesday that its joint exhibition with the cultural arm of the United Nations, titled “Book, People, Land – The 3500 Year Relationship of the Jewish People With the Holy Land,” will open on June 11, 2014, at UNESCO headquarters in Paris.

In a Jan. 15 letter, UNESCO director-general Irina Bokova had told the Wiesenthal Center that the exhibit, which the center organized along with the governments of Canada and Montenegro, would be postponed indefinitely. She said the decision arose out of UNESCO’s support for peace talks between Israel and the Palestinian Authority.

The exhibit consists of 30 illustrated panels and explanatory text.

“It was not a political statement that belongs to an individual or a party, but simply the collective narrative of the Jewish People — religious, secular, left and right — and their three and a half millennia relationship to the Holy Land. It is precisely that narrative that the Arab League did not want the world to know about,” said Rabbi Marvin Hier, founder and dean, Simon Wiesenthal Center, in a statement.

“It was simply ludicrous for the 22 Arab states that belong to UNESCO to attempt to torpedo the exhibition, just days before its opening, on the grounds that it interferes with Secretary of State John Kerry’s efforts to jumpstart the Middle East peace process,” said Hier, adding that the exhibit has “nothing to do with the peace process.”

“It is ironic, that while the Arab League was trying to kill this exhibition and all the attention was focused on Paris, the UN headquarters in New York is hosting an exhibit entitled, ‘Palestine,’ based entirely on the Arab narrative, which was not criticized as an interference with Secretary Kerry’s mission,” he said.