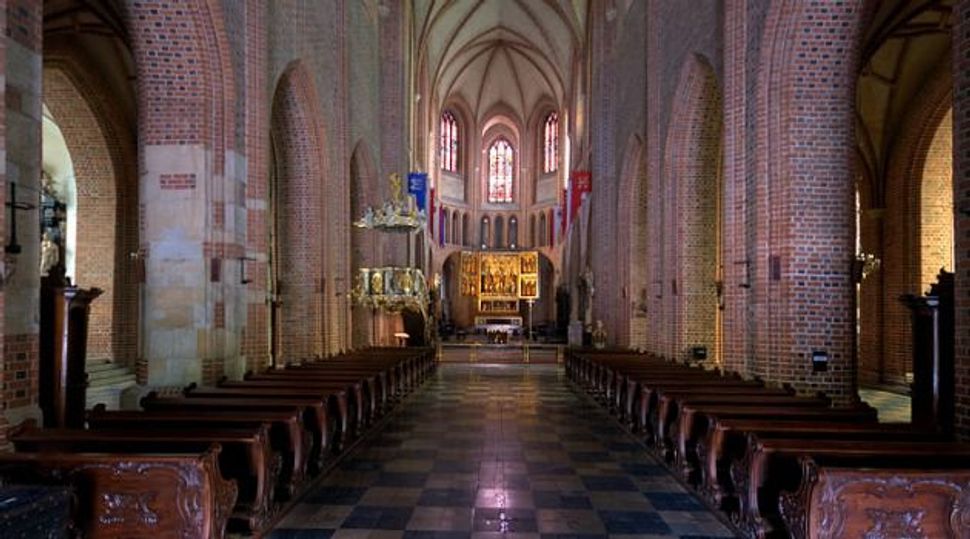 The leader of Poznan’s Jewish community has accused Catholic clergymen of perpetuating a local blood libel.

Alicja Kobus, chairwoman of the western city’s Jewish community, made the accusation on Jan. 26 in an interview with the Gazeta Wyborcza daily about a fresco which depicts an anti-Semitic blood libel and which adorns Poznan’s Sacred Blood of Christ cathedral.

The fresco, which was painted by the 17th-century Franciscan monk Adam Swach, depicts a local blood libel which said Jews desecrated communion bread before its consumption by Christians. The men are seen sticking pins in the bread as a demon watches them approvingly.

Following queries about the fresco from journalists, the church recently placed a sign explaining that the scene is a blood libel. But the sign, the daily reported, was placed on a different floor of the cathedral, several hundreds of yards away from the fresco, which is located on the upper floor, near the altar and where mass is usually held.

“The board should hang where everyone can see it,” Kobus said. “Concealing such things is a sad occurrence and it looks like someone is trying to play hide and seek.”

The rector of the Sacred Blood of Christ cathedral, Leszek Wilczynski, told the Gazeta Wyborcza daily that the sign was placed on the lower floor because the upper floor walls had no space. “Please don’t look for sensations, the fresco is not the main issue in this holy place,” he said.

On Jan. 17, a cathedral in Sandomierz displayed a painting of Jews killing Christian children that had previously been covered up for being too offensive. A sign affixed next to the painting said the scene depicted was a falsehood.