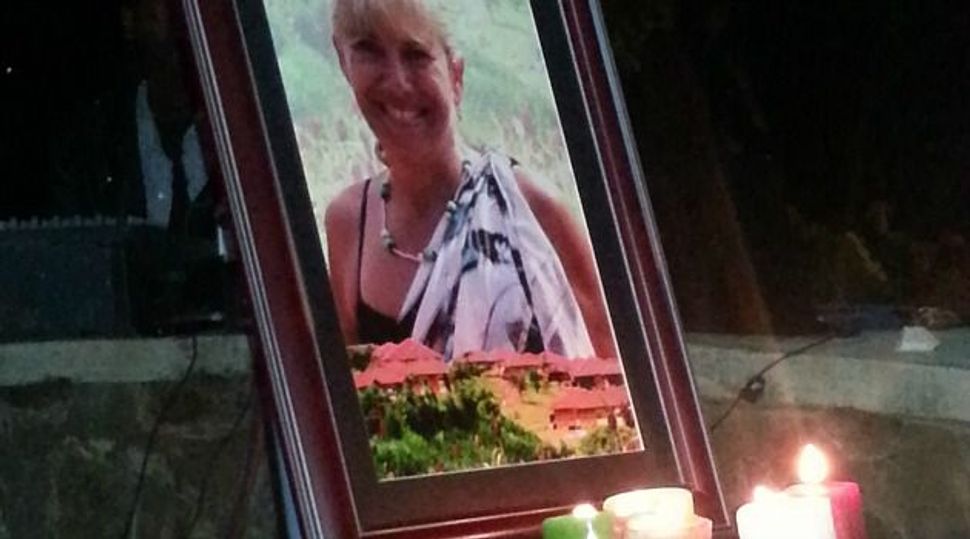 Tributes are pouring in for Anne Heyman, who was remembered as a pioneering Jewish philanthropist who devoted her life to tikkun olam.

Heyman, 52, who founded a youth village for Rwanda genocide victims, died Friday afternoon after falling from a horse at a Palm Beach equestrian competition.

“She wanted to world to know that we each need to stand against genocide and do what we can to make a difference for other,” said Ruth Messinger, president of American Jewish World Service.

“Anne modeled what it meant to be a visionary activist who put Jewish values into practice,” said Rabbi Jeffrey Summit, the executive director at Tufts Hillel, where Heyman sat on the board.

Heyman, a South-African born lawyer who worked as a District Attorney, was a strong supporter of numerous Jewish causes, including the Heschel School in New York, Dorot, Young Judea, JCCs and other causes within and beyond the country.

It was at Tufts Hillel in 2005 that she heard the Rwandan hotel manager who saved upwards of 1,200 Rwandans, Paul Rusesbagina mention his nation’s still ailing orphan population. The talk spurred Heyman to raise $12 million to create Rwanda’s Agahozo-Shalom Youth Village, which houses and educates orphans who lost their parents during the 1994 Rwandan genocide.

Heyman visited the school often and maintained a strong relationship with students who referred to her as a second mother.

“She was committed and dedicated to making sure the village was sustainable and that it fulfilled the original mission and dreams that were intended,” said William Recant of the American Jewish Joint Distribution Committee. “She was extremely hard working and it’s a tremendous loss.”

Those who knew Heyman personally say that she was not only incredibly hard-working and passionate, but also exceptionally humble. She spoke more often of family than her successful career and philanthropic work.

“She was just a pleasant spirit and one of the most humble people I know,” said Tricia Brouk, who directs a personal training company that Heyman used.

A gifted athlete and an avid horseback rider, Brouk said that Heyman’s exceptionally rigorous workout routine reflected the hard-work and ambition that characterized much of Heyman’s life.

“She was not only impressive in her generosity to her world, but she was impressive in every way: as a woman, as a human being, as an athlete, as a philanthropist, as a lawyer, and as a mother, wife and friend,” said Brouk.

Leaders from organizations Heyman supported say that she is irreplaceable.

She is survived by her husband Seth Merrin and their three children. The funeral is scheduled for Monday at New York’s B’nai Jeshurun synagogue.

Thousands of miles away, the youth village will be holding their own memorial for Heyman, who they honorarily call “grandma.”

“She was really remarkable,” said friend and Agahozo-Shalom Youth Village board member Laurie Franz. “I think she’ll be remembered as someone who really brought people together and touched everybody.”