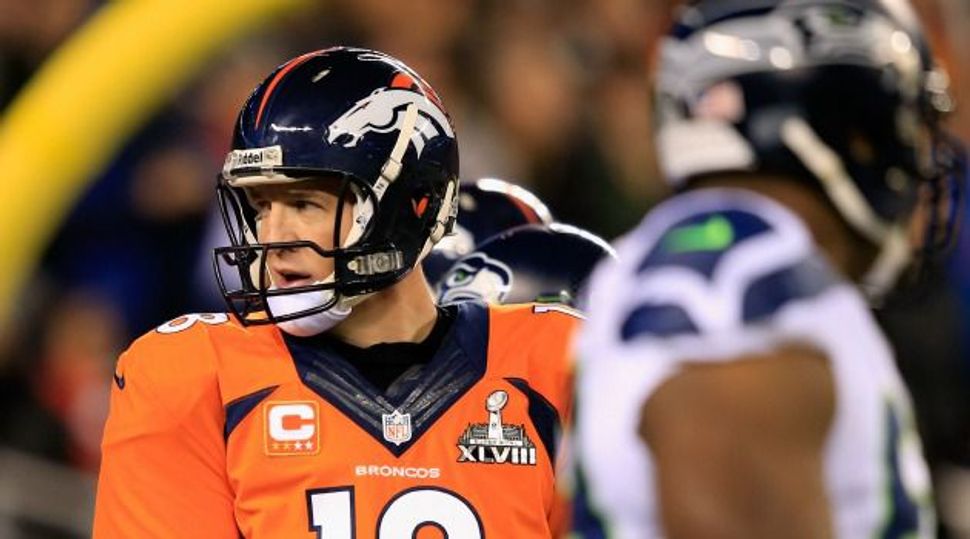 Safety Score: A screw-up by Denver Broncos quarterback Peyton Manning on the first play of the Super Bowl led to a big pay day for one bettor. Image by getty images

Jona Rechnitz, a 31-year-old real estate owner in New York, made $15,000 for wagering that the Seattle Seahawks would score the first points of Super Bowl XLVIII on a safety.

Rechnitz’s proposition bet paid out at 50 to 1 odds, thanks to an errant snap that flew over the head of Denver Broncos quarterback Peyton Manning on the first play after kickoff.

A copy of a $300 betting slip was posted to Instagram by Ari Schwebel, who works at the Rechnitz-owned JSR Capital. The caption of the photo indicates the bet was placed jointly by Schwebel and Rechnitz. Rechnitz made headlines for winning a similar wager just two years earlier.

In 2012, Rechnitz made $50,000 off a $1,000 gamble when the New York Giants scored a safety on the New England Patriots’ first possession of Super Bowl XLVI. After the game, Rechnitz pledged to donate the proceeds from his win to charity.

Rechnitz declined to comment on what he plans to do with his latest sports betting haul, Schwebel’s brother told JTA. It is also unclear whether Rechnitz placed any other bets on Super Bowl XLVIII.

An alumnus of Yeshiva University, Rechnitz has made headlines for his unorthodox Jewish philanthropic efforts spawned from sporting events.

In May 2013, the New York Daily News reported that Rechnitz schmoozed billionaire Stewart Rahr at a Knicks game for a $100,000 contribution to Yeshiva Ketana in Manhattan and an unnamed Jewish educational program in Israel.

Rahr also gave a contribution to the Simon Wiesenthal Center after the game, where Rechnitz claimed Rahr was looking “to get significantly involved.”