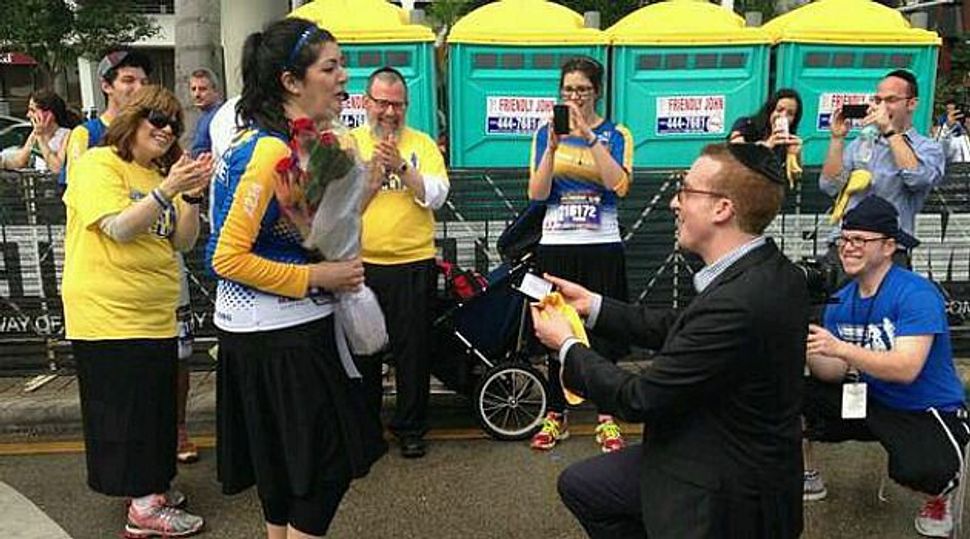 I Will! Rachel Avisrur accepts proposal from hubby-to-be Avi Wolf after finishing the Miami Marathon.

A marriage proposal awaited a runner at the finish line of the Miami Marathon.

New Yorker Rachel Avisrur, who was running in Sunday’s marathon to raise money and awareness for Chai Lifeline, was surprised to find her boyfriend Avi Wolf at the finish line holding a bouquet of flowers.

He then went down on one knee and asked her to marry him.

Wolf told NBC Miami that he chose to propose at the marathon because he knew it was important to her.

“You only live once,” he said. “She supports Chai Lifeline. I knew she was here and wanted to surprise her with something she loves to do.”

Some 300 runners ran to support Team Lifeline, many of whom pushed children with chronic illnesses and cancer survivors in wheelchairs along the route. The organization runs a camp for Jewish children with life-threatening illnesses and provides other support.

Avisrur told NBC that she is “the happiest person ever. I thought he was in New York.”