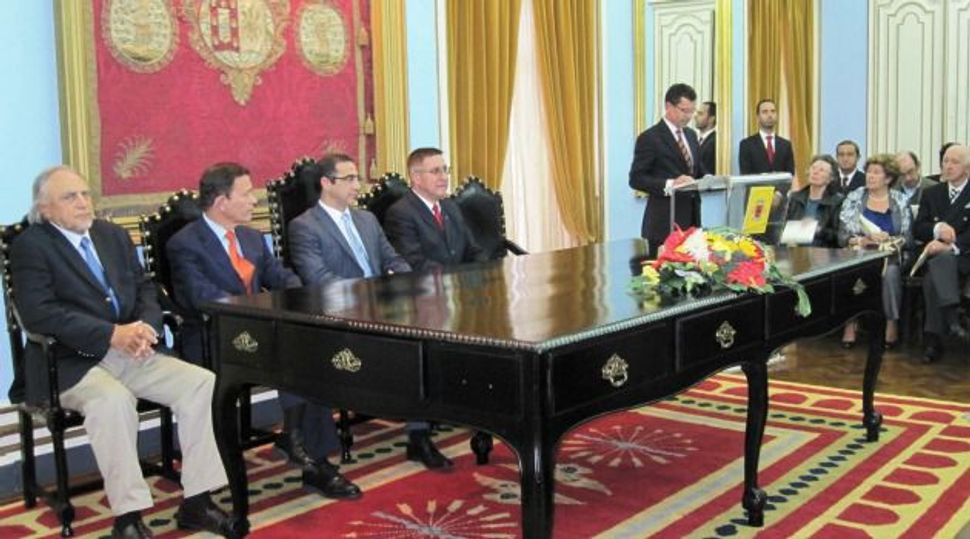 Shul Spruce-Up: American and Portuguese leaders announce plans to spruce up a synagogue in the city of Ponta Delgada.

A Portuguese municipality has begun restoring the country’s oldest intact synagogue, which is situated on the island of Sao Miguel.

The restoration of the Sabar Hassamain synagogue was kicked off on Monday in a ceremony conducted by Jose Manuel Bolieiro, mayor of Ponta Delgada – capital of the Azores archipelago, a region of Portugal which is located 900 miles west of Lisbon on an island in the Atlantic Ocean.

The restoration of the synagogue, founded in the beginning of the 19th century, will cost approximately $290,000, which will be provided by European Union bodies devoted to the preservation of historical monuments. It is scheduled to be completed in eight months, the RTP television channel reported. At the end of the restoration work the synagogue will become a museum.

“This intervention is not limited to recovering the architectural features” of the building, Bolieiro said according to RTP. “We plan to create the necessary conditions for the preservation of the memory of Jewish presence in the Azores, through turning it into a museum.”

Also present during the ceremony was Massachusetts State Senator Michael J. Rodrigues (D), who has been involved in the work of the U.S.-based Azorean Jewish Heritage Foundation, which has lobbied for the restoration project.

The synagogue-museum last functioned as a place of worship some 50 years ago. A library and display area will be incorporated into the main sanctuary.

The synagogue formerly was the property of the Jewish Community of Lisbon, but the community relinquished ownership of the building in 2009 and transferred it to the municipality for a period of 99 years, RTP reported.

Situated between Europe and the Americas, the Azores attracted several families of Moroccan Jewish merchants who profited from its strategic location for the shipping industry.

On Saturday, the network reported on a separate plan being prepared by the Jewish community of Belmonte in Portugal’s north for opening a Jewish learning center.