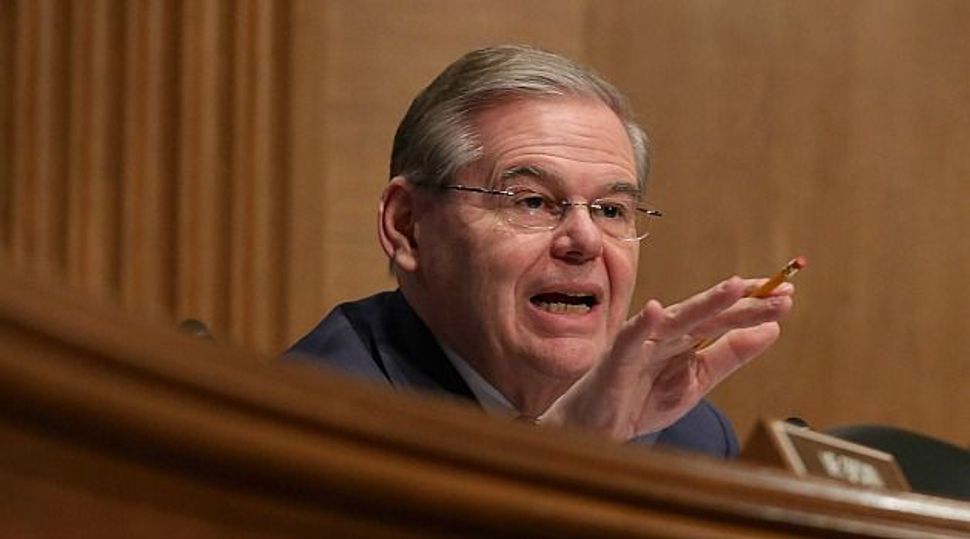 Sinking Ship: With little chance of success, Iran sanctions sponsor Robert Menendez decided to back away from pushing a bill ? and AIPAC followed suit. Image by getty images

The American Israel Public Affairs Committee backed away from pressing for passage of an Iran sanctions bill at this time.

In a speech Thursday on the Senate floor, sponsor Sen. Robert Menendez (D-N.J.) said dealing with Iran deserved “a spirit of bipartisanship and unity,” and rejected bids to make it a partisan issue. “I hope that we will not find ourselves in a partisan process trying to force a vote on a national security matter before its appropriate time,” he said.

“We applaud Senator Menendez’s determined leadership on this issue and his authorship with Senator Mark Kirk (R-Ill.) of the Nuclear Weapon Free Iran Act,” said the statement from AIPAC issued after the speech by Menendez, the chairman of the Foreign Relations Committee.

“We agree with the chairman that stopping the Iranian nuclear program should rest on bipartisan support and that there should not be a vote at this time on the measure,” AIPAC said in its statement. “We remain committed to working with the Administration and the bipartisan leadership in Congress to ensure that the Iran nuclear program is dismantled.”

Of the 33 original sponsors of the bill when it was first introduced in mid-December, 15 were Democrats. In subsequent weeks, the Obama administration, which opposes new sanctions, lobbied hard, and almost no new Democrats signed on.

At least four of the original Democratic sponsors said in recent weeks that they no longer favored a near term vote. AIPAC continued to press for passage until the bill took on a partisan hue Thursday when 42 Republicans, led by Kirk, threatened parliamentary maneuvers to force a vote on the bill. AIPAC studiously avoids any appearance of partisanship.

Opponents of the new sanctions say they could scuttle new talks now underway between Iran and the major powers aimed at keeping Iran from obtaining a nuclear weapon and also rupture the international alliance that nudged Iran to talks through existing sanctions.

Advocates of the sanctions say they would have strengthened the hands of the West at the talks, and halted what they say is momentum toward stripping Iran of the sanctions