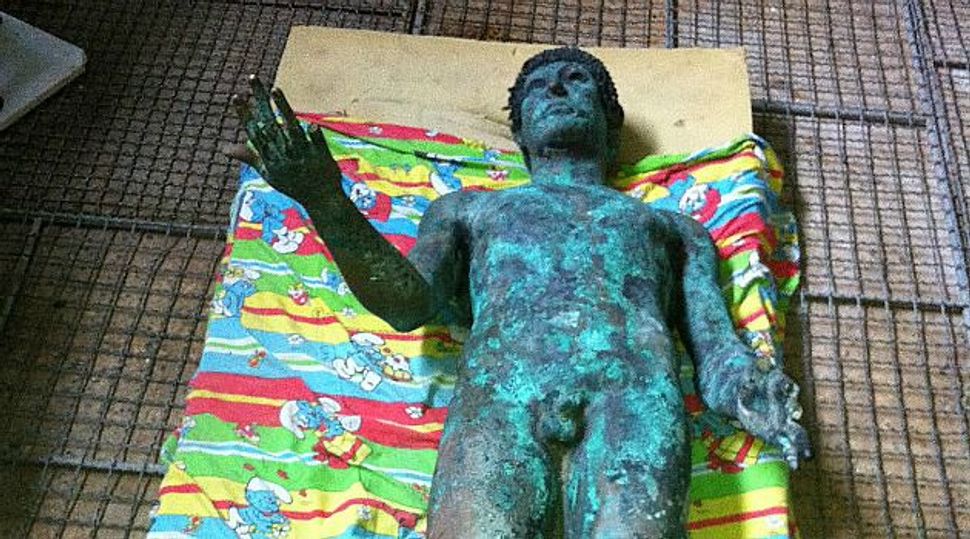 Found and Lost: A rare bronze statue of Apollo mysteriously surfaced in Gaza and was briefly put up for sale on eBay. Image by ebay

Lost for centuries, a rare bronze statue of the Greek god Apollo has mysteriously resurfaced in the Gaza Strip, only to be seized by police and vanish almost immediately from view.

Word of the remarkable find has caught the imagination of the world of archaeology, but the police cannot say when the life-sized bronze might re-emerge or where it might be put on display.

A local fisherman says he scooped the 500-kg god from the sea bed last August, and carried it home on a donkey cart, unaware of the significance of his catch.

Others soon guessed at its importance, and the statue briefly appeared on Ebay with a $500,000 price tag – well below its true value. Police from the Islamist group Hamas, who rule the isolated Palestinian territory, swiftly seized it and say they are investigating the affair.

To their great frustration, archaeologists have not been able to get their hands on the Apollo, and instead must pore over a few blurred photographs of the intact deity, who is laid out incongruously on a blanket emblazoned with Smurfs.

From what they can tell it was cast sometime between the 5th and the 1st century BC, making it at least 2,000 years old.

“It’s unique. In some ways I would say it is priceless. It’s like people asking what is the (value) of the painting La Gioconda (the Mona Lisa) in the Louvre museum,” said Jean-Michel de Tarragon, a historian with the French Biblical and Archaeological School of Jerusalem.

“It’s very, very rare to find a statue which is not in marble or in stone, but in metal,” he told Reuters television.

The apparently pristine condition of the god suggested it was uncovered on land and not in the sea, he said, speculating that the true location of where it was unearthed was not revealed to avoid arguments over ownership.

“This wasn’t found on the seashore or in the sea … it is very clean. No, it was (found) inland and dry,” he said, adding that there were no tell-tale signs of metal disfigurement or barnacles that one normally sees on items plucked from water.

At first he thought it was a badly burnt body, but when he dived down to take a closer look he realised it was a statue. He says it took him and his relatives four hours to drag the “treasure” ashore.

“I felt it was something gifted to me by God,” the bearded Ghrab told Reuters. “My financial situation is very difficult and I am waiting for my reward.”

His mother was less happy when she saw the naked Apollo carried into the house, demanding that his private parts be covered. “My mother said ‘what a disaster you have brought with you’ as she looked at the huge statue,” said the bulky Ghrab.

The discoloured green-brown figure shows the youthful, athletic god standing upright on two, muscular legs; he has one arm outstretched, with the palm of his hand held up.

He has compact, curly hair, and gazes out seriously at the world, one of his eyes apparently inlaid with a blue stone iris, the other just a vacant black slit.

Ghrab says he cut off one of the fingers to take to a metals expert, thinking it might have been made of gold. Unbeknownst to him, one of his brothers severed another finger for his own checks. This was melted down by a jeweller.

Family members belonging to a Hamas militia soon took charge of the statue, and at some stage the Apollo appeared on Ebay, with the seller telling the buyer to come and collect the item from Gaza.

That would have been easier said than done, however, as Gaza is virtually sealed off from the outside world, with both Israel and Egypt imposing rigid controls on access to the impoverished enclave and its 1.8 million inhabitants.

Whether any potential buyers stepped forward is not clear, but when Hamas’s civilian authorities found out about the artefact, they ordered that the police seize it.

Officials at Gaza’s tourism ministry told Reuters the statue will not be shown to the public until a criminal investigation is completed into who tried to sell it.

However, Ahmed Al-Bursh, the ministry’s director of archaeology, said he had seen it and promised that Ghrab would receive a reward once the issue was resolved.

“It is a precious treasure, an important archaeological discovery,” said Bursh. Once the statue was released by police, his ministry plans to repair it and put it on show in Gaza.

“International institutions have also contacted us and have offered to help with the repair process,” he said, adding that a museum in Geneva and the Louvre in Paris wanted to rent it.

Like Ghrab, Bursh said the statue had been found at sea.

The historian Tarragon said it was vital to know the true location of its discovery.

Some 5,000 years of history lie beneath the sands of the Gaza Strip, which was ruled at various times by ancient Egyptians, Philistines, Romans, Byzantines and Crusaders.

Alexander the Great besieged the city and Emperor Hadrian visited. However, local archaeologists have little experience to carry out any scientific digs and many sites remain buried.

Statues such as the Apollo cast would not have been held in isolation, meaning it might prove the tip of an historical iceberg, Tarragon said.

“A statue at that time was (put) in a complex, in a temple or a palace. If it was in a temple, you should have all the other artefacts of the cult (at the site),” he said, adding that he hoped Hamas appreciated its potential importance.

“There is a feeling that they could find more and more (items) linked to the statue, more and more artefacts, so this is very sensitive,” he said