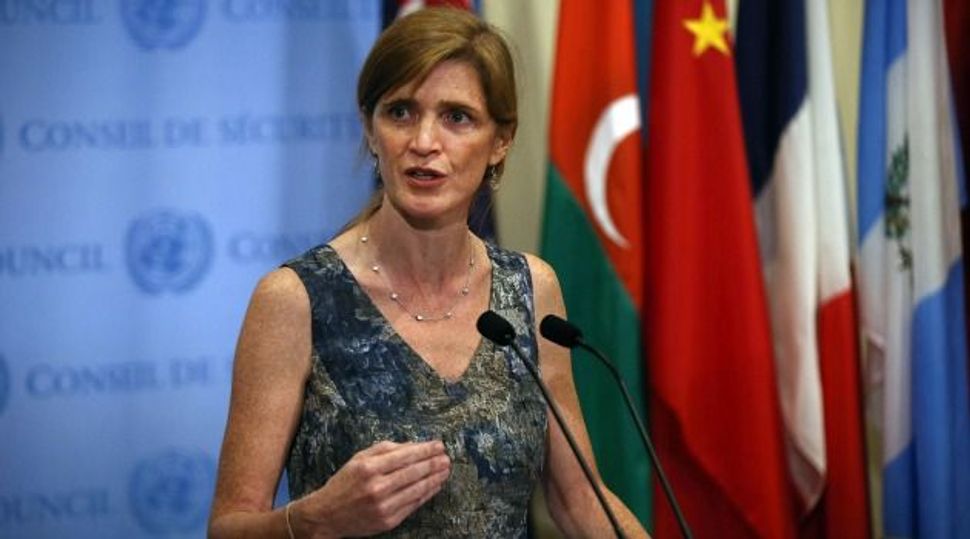 Samantha Power, the U.S. envoy to the United Nations, recommitted to securing Israel a tour on the U.N. Security Council after assisting its entry to a U.N. regional group.

Israel last month became a member of the JUSCANZ regional group at U.N. headquarters in New York. JUSCANZ stands for Japan, United States, Canada, Australia, and New Zealand, some of the 15 members of the regional group, which is a sub-group of the Western European and Others (WEOG) regional group at the U.N.

Israel was admitted to WEOG in New York in 2000, and in Geneva in 2013. Israel had been a member of JUSCANZ in Geneva, but until late last month not in New York.

In an address Monday to the Board of Governors of the American Jewish Committee, Powers said she will not give up on achieving a seat on the U.N. Security Council for Israel.

Israel is vying with Germany and Belgium for a seat on the 2019-20 Security Council.

“We have pushed relentlessly for the full inclusion of Israel across the U.N. system,” Power said.

Joining regional groups is an important example of the “continuing effort to chip away at systemic discrimination against Israel at the U.N.,” she added.

“JUSCANZ membership is another important step in rectifying the systemic discrimination against Israel at the U.N.,” Harris said. “Both Ambassador Power and her Canadian counterpart, Ambassador Guillermo Rishchynski, were instrumental in achieving this long overdue breakthrough.”

Meanwhile, the Prime Minister’s Office announced Tuesday that Benjamin Netanyahu would travel to Colombia and Mexico this spring following the announcement that Israel was granted observer status in the Pacific Alliance.

The alliance, formed in 2011 to increase economic cooperation among its member states, is composed of Chile, Colombia, Mexico and Peru. The United States and France are among its observer states, which can participate in conferences and in staff work.