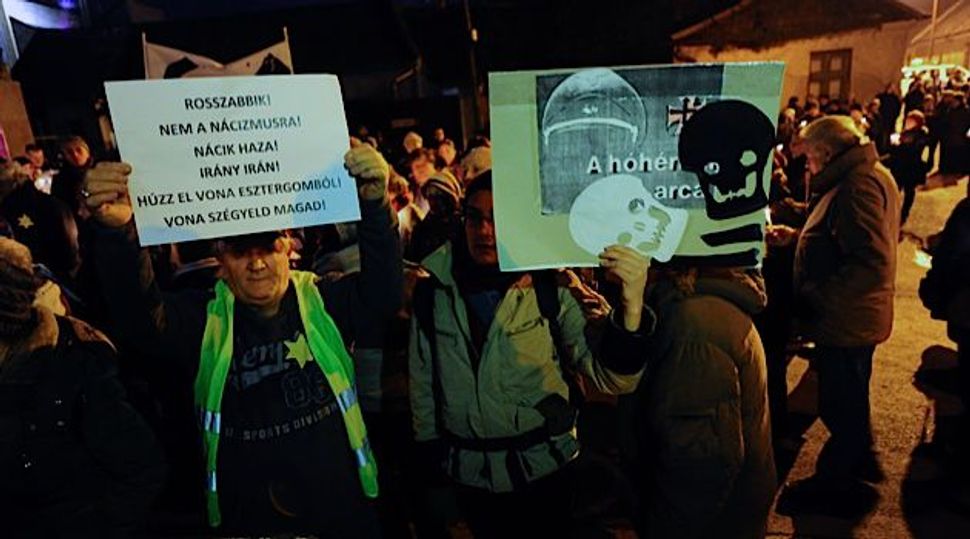 Members of the Jewish community protest the ultra nationalist Jobbik party which held a rally in a former synagogue. Image by getty images

The rally by the party, whose ultra-nationalist platform is laced with anti-Semitism and anti-Roma policy, was held Saturday night in the former synagogue in the town of Esztergom, located 29 miles north of Budapest.

The building currently is operated by the local government as a cultural and meeting center.

Several hundred demonstrators protested the meeting. They stood outside the former synagogue during the Jobbik rally reading the names of the 500 Holocaust victims who were deported to Auschwitz from the town in 1944.

Jobbik party leader Gabor Vona told the demonstrators that “there is an atmosphere of hysteria due to the Holocaust Memorial Year in Hungary, which wants to make Hungarians feel guilty.”

Despite a heavy police presence at the rally, there were several incidents between Jobbik supporters and demonstrators.

Hungarian authorities had given official permission to the Jobbik Party to hold its rally in the synagogue, since the synagogue is now owned by the municipality and not by the Jewish community.