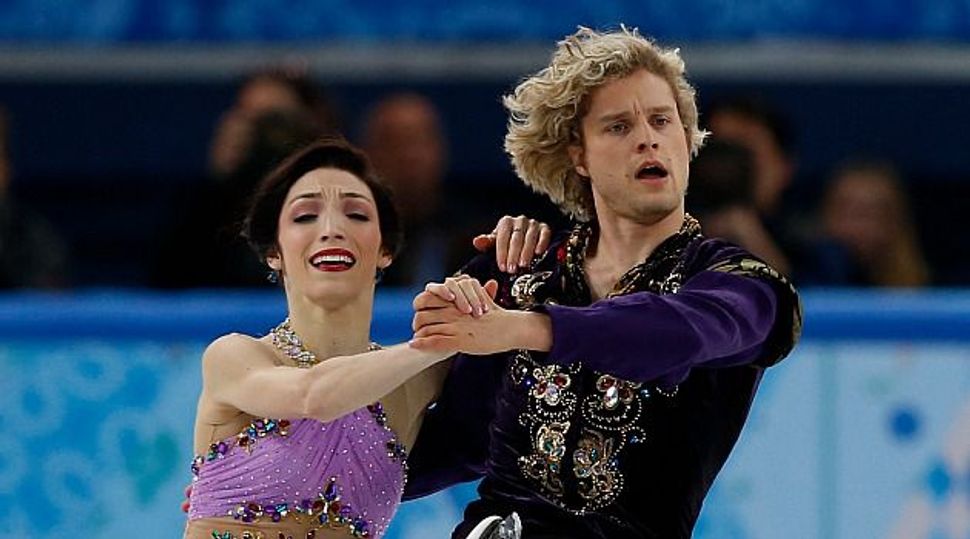 A sultry performance that lasted four spellbinding minutes, but was 17 years in the making, propelled Meryl Davis and Charlie White to become the first Americans to win the Olympic ice dance title at the Sochi Games on Monday.

In a showdown with rivals and Canadian training partners Tessa Virtue and Scott Moir, the American couple proved a cut above the rest by winning with a world record total of 195.52.

An adventure that began rather tentatively in 1997 when a nine-year-old Davis was left blushing and tongue-tied after being told to gaze deeply into her eight-year-old partner’s eyes, ended on Monday with the duo exchanging looks of joy.

“We’re so excited, we’re kind of in shock a little. I’m not sure what we’re feeling,” a beaming Davis told reporters after improving on their silver medal from four years ago.

“It kind of all came together for us and we’re so pleased to be here. We’re kind of in disbelief.”

White, who is Jewish, added: “To come away with a gold medal is amazing… And 17 years of hard work was justified.”

From the moment the Americans stepped on the ice, with Davis wearing a sequined purple halter neck dress and White in an embroidered velvet jacket, the crowd waited with bated breath to see which side of the International Boundary the gold medal would end up in.

The Americans were soon showing why they have been unbeatable for 22 months.

They flew around the ice at a frantic pace, seamlessly weaving dazzling lifts and synchronised twizzles into their dramatic performance of Scheherazade – the story of a sultan’s wife whose enchanting tales stopped her husband’s bizarre habit of marrying a new wife every day and beheading the previous one.

When White held aloft Davis in the splits as he spun around rapidly, the crowd cheered.

When Davis stood with one blade on White’s right thigh with her other leg wrapped around his shoulder, the crowd roared.

When White ended the performance on bended knees, he was shattered.

A breathless White struggled to put one boot in front of the other as the couple skated off the rink and when their scores flashed up to confirm they were only the fourth non-Russian couple to scoop ice dance gold there were hugs all around.

A journey that led the Americn pair down a path in which they won two world championships, five consecutive grand prix finals and a record six successive U.S National titles, ended on Monday with the biggest prize of all.

They also finished off with a flourish as they earned world record scores in each segment of the competition – following up their 78.89 in the short with 116.63 in the long programme.

“Gold is something that you dream about. It has been an amazing journey,” a dazed White gasped as he tried to digest a winning streak that has now stretched to 12 events.

Virtue and Moir had hoped to join Russians Oksana Grishuk and Evgeny Platov as the only couples to have won back-to-back Olympic ice dance golds but had to settle for silver with 190.99.

The Canadian couple, who charmed the world four years ago on home ice in Vancouver, were delighted with their classical interpretation of Petit Adagio, Waltz in Concerto No.2.

They ended their stirring programme with their palms pressed to their hearts, but despite earning their season’s best score of 114.66 for the free dance, they simply could not topple the Americans.

“We felt immense pressure. We trained 17 years for this moment.”

Her partner Moir added: “That was our best performance of the year for that programme. It’s our baby – and it’s special for us to perform it for the last time.”

However, once the scores of the Americans, who skated last, flashed up, Moir could only shrug in disappointment.

With both couples hinting that the Olympics will be their swansong, they played out the final chapter of an intense rivalry that dates back more than a decade.

During that time they have shared training bases, a coach in Marina Zoueva and a medal haul that includes two world championships each and an Olympic gold.

“There are a lot of sleepless nights that go into an Olympic Games,” added Moir, who returned to an echoing arena once all the crowd had disappeared to kneel over and kiss the Olympic rings at the centre of the rink.

“It has been a fierce rivalry between the four of us and now I think the pressures of these Games are kind of just melting away.”

The decision of Russia’s Elena Ilinykh and Nikita Katsalapov to persevere with their on-off-on partnership paid dividends as their ice dance to Tchaikovsky’s Swan Lake won them bronze with a total of 183.48.

That result meant couples from Russia or the former Soviet Union have finished on the ice dance podium at every Olympics dating back to the event’s introduction in 1976.