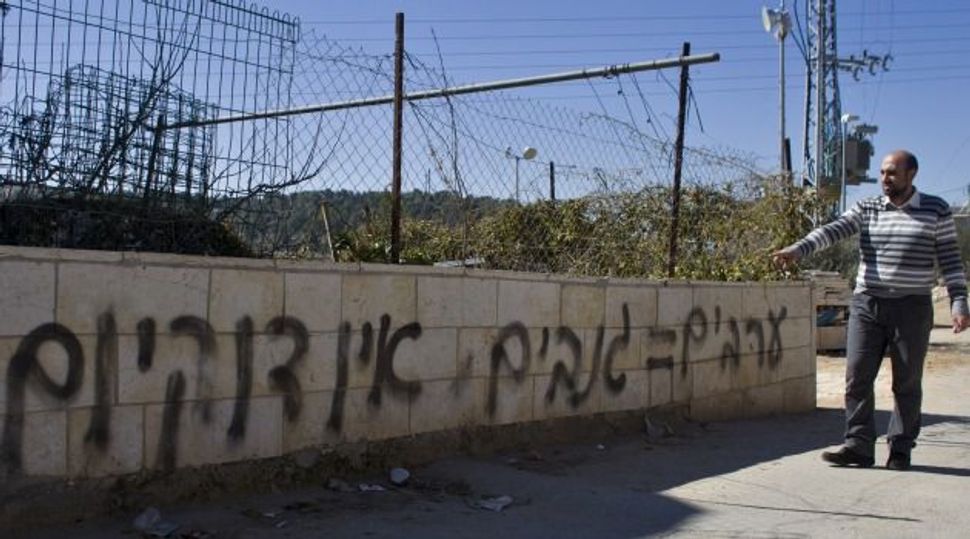 The tires of 30 cars were slashed and anti-Arab graffiti was painted on the way of an eastern Jerusalem village in what is being called a price tag attack.

The attack early Wednesday morning in the Arab neighborhood of Sharafat in the village of Beit Safafa is the second in eastern Jerusalem in two weeks, and the second price tag attack in Beit Safafa in recent months.

Price tag refers to the strategy adopted by extremist settlers and their supporters generally to exact retribution for settlement freezes and demolitions or Palestinian attacks on Jews.

The anti-Arab messages included ”Arabs=Thieves” and “There is no coexistence.”

“This is a group of irresponsible criminals who will do all they can to fan the flames of dispute out of a desire to cause extremists on the other side to respond, thereby causing an escalation that could turn into an uncontrollable fire,” said Peretz, according to Haaretz. “They must be stopped and treated as terrorist groups, and all measures must be taken to bring them to justice.”