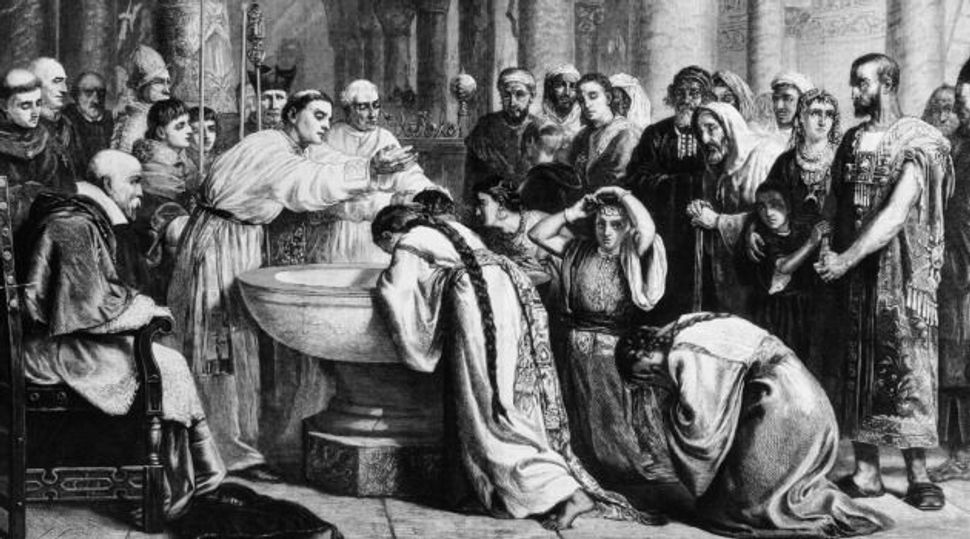 Baptism of Fire: Muslims were forced to convert to Christianity and driven out of Spain, much like Sephardic Jews. So they ask why they shouldn?t also qualify for citizenship. Image by getty images

Spanish Muslims urged their government to grant citizenship to descendants of Muslims who were expelled from Spain in addition to Jews.

The demand was made this week in a statement by the Association for Historical Legacy of Al-Andalus, the Spanish news agency EFE reported on Feb. 17.

“The Spanish state should grant the same rights to all those who were expelled, otherwise their decision is selective, if not racist,” Bayi Loubaris, the association’s president, told EFE.

Several other prominent Muslims and legal experts accused the Spanish government of pursuing a double standard following the approval on Feb. 10 of a bill proposing to naturalize descendants of Sephardic Jews, which the governments said was to atone for the expulsions 500 years ago.

Submitted by Spain’s Justice Minister, Alberto Ruiz-Gallardon, the bill is expected to go up to a vote in Spanish congress this year. Portugal already passed a law granting citizenship to descendants last year and its interior ministry is currently drafting regulations ahead of the law’s application, according to Portuguese lawmakers who submitted the bill.

The Jews were persecuted in Spain and Portugal during the Inquisition which the Catholic Church and royal houses of both countries led against non-Christians in the 15th and 16th centuries.

“Recognition of the Sephardic community is symbolic, necessary and just. The same applies to those who have kept their Andalus-Moorish identity in exile,” Manuel Antonio Rodríguez, a professor of law at the University of Cordoba, told the El Confidencial daily on Sunday.

In 2006, the United Left party in the parliament of the autonomous Spanish region of Andalusia submitted a bill which proposed recognizing the rights of descendants of Muslims who were expelled but the bill never made it to a vote.

Portuguese lawmakers who drafted the country’s law on Sephardic Jews rejected calls to naturalize the descendants of Muslims who were expelled, citing the fact that the expulsion of the Muslims was part of a war to end the occupation of Spain by North African invaders.

“Persecution of Jews was just that, while what happened with the Arabs was part of a conflict,” Jose Ribeiro e Castro, a Spanish lawmaker who drafted Portugal’s law of return, said. ”There’s no basis for comparison.”