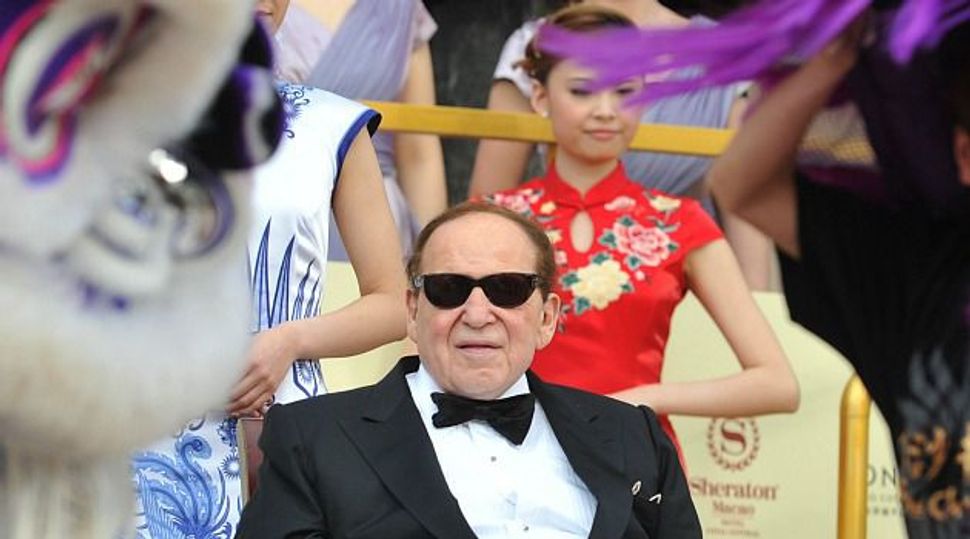 For months, the chief executive of the world’s largest casino operator by market value has insisted he’s the person to beat in Japan as it moves closer to legalising casinos, with parliament expected to start deliberating an initial bill in May.

Adelson’s aggressive, go-it-alone strategy is, however, worrying lawmakers and businessmen who want domestic firms to play a significant role in any casino business. At the same time, rival operators including MGM Resorts International and Wynn Resorts and local firms like slot machine maker Sega Sammy Holdings are also gunning hard for the few licenses expected to be up for grabs.

“I think this process will be so extraordinarily clear, transparent, deliberate and organized that no amount of early pioneering will carry the day,” James Murren, chief executive of MGM Resorts, told Reuters in an interview.

In October, he told investors that anyone, including politicians, would agree that Las Vegas Sands was in the pole position, according to a transcript of an earnings call.

A month later, he gave a spirited presentation to Hiroyuki Hosoda, a heavyweight in the ruling Liberal Democratic Party and head of an intra-party group promoting the casino bill. Adelson went through slide after slide, some with mock-ups of what his resort might look like on Tokyo Bay, according to a person who knows what happened at the meeting.

At the end of the pitch, Hosoda offered Adelson some advice, the person said. Hosoda told Adelson that Tokyo had its own culture, and just replicating the type of complex Las Vegas Sands built in Singapore wouldn’t necessarily work.

It was a gentle reminder that the government would have a say in what was built and by whom. It also reflected general concerns about Adelson’s openness to local involvement, the person said.

Adelson did little to dispel these concerns at a media briefing in Tokyo this week, saying he would prefer not to take on equity partners. He also questioned the ability of the Japanese companies interested in casinos to take on the scale of risk required for the massive complex he wants to build.

“No one is talking about implementing foreign capital restrictions but many lawmakers in the casino group want Japanese companies to have the opportunity to invest. They want to make sure some money stays in Japan,” the person said.

Las Vegas Sands did not respond to a request for comment on that meeting and did not make executives available for interviews. The person who told Reuters about the meeting also declined to be identified as they are not authorised to speak to the media.

Japan is widely viewed as a prize market for casino operators due to its wealthy population and proximity to China, home to some of the world’s most prolific, and wealthiest, gamblers. Brokerage CLSA estimates Japan could be the world’s third biggest gambling market after Macau and the United States, raking in revenues of at least $40 billion annually and with many more years of growth before it starts to mature.

After more than a decade of deliberations, the chances have never been higher that Japan will move to allow casinos. If parliament approves the initial bill, as expected, bureaucrats can then start working on concrete laws that would be incorporated in a second bill proponents aim to pass in 2015.

If the legislation is approved, Japan may see its first casino in time for the 2020 Tokyo Olympics, which would attract more big-spending Chinese gamblers and help boost an economy struggling with deflation and sluggish growth.

The developments in Japan come as U.S. operators and Asian players like Genting Bhd, Melco Crown Entertainment and Galaxy Entertainment Group are setting up large-scale integrated resorts across Asia to emulate the booming revenues generated in Macau and Singapore.

Adelson’s success in building casino resorts in both locations gives him an advantage in Japan, where lawmakers consider his Singapore-based Marina Bay Sands – which combines a multi-floor casino with a luxury hotel, convention space and high-end shopping mall – as the benchmark.

Adelson is also banking on Sands’ ample finances and its competitor-dwarfing $66 billion market capitalisation as differentiating factors. “We can spend 10 billion dollars without borrowing money. They can’t,” he said in Tokyo.

But capital is unlikely to be a major constraint for casino operators given that banks will be eager to lend to such a promising business, with the first round of licenses likely to be limited to Tokyo and Osaka, said Aaron Fischer, a CLSA analyst. He said political connections could also play an important role.

As the casino debate nears, all the big operators are calling on the same list of parliamentary power brokers, local government officials and business leaders in Tokyo, hoping to gain an edge.

Topping the list are Hisashi Hieda, chief executive of broadcaster Fuji Media Holdings as well as senior executives at property developer Mitsui Fudosan and builder Kajima Corp. Those three companies are crucial because they have already forged an alliance for the Odaiba district, the preferred site for a casino development near Tokyo Bay.

Some of Sands’ competitors have made it clear that they are willing to jointly invest with domestic partners.

MGM’s Murren said he was meeting with Japanese companies in various sectors, hoping to form a consortium in which his company would like to have a majority.

U.S. firm Caesars Entertainment Corp, which has yet to set up a casino in Asia, is also seeking a “strong consortium of local partners” said William Shen, its vice president of Asia development.

Melco, which pledged $10 million for cultural projects in Japan in December, is trying to distinguish itself from the pack by incorporating Japanese culture and philosophy in its resort instead of replicating the Las Vegas experience, the company said in an email to Reuters.

The battle for Osaka, the commercial centre of western Japan, is also heating up.

Osaka is looking for an operator that will invest a large amount but that will also help the city become a major tourist and convention destination, Inoue said, adding that he’d like to see the winning operator use some of the environmentally friendly technology produced by local companies.

For foreign operators looking at Japan, addressing the needs of the various domestic stakeholders could prove a major challenge, said David Green, head of Macau-based Newpage Consulting which focuses on the gaming industry.