‘Death to Jews’ Scrawled on Synagogue in Crimea 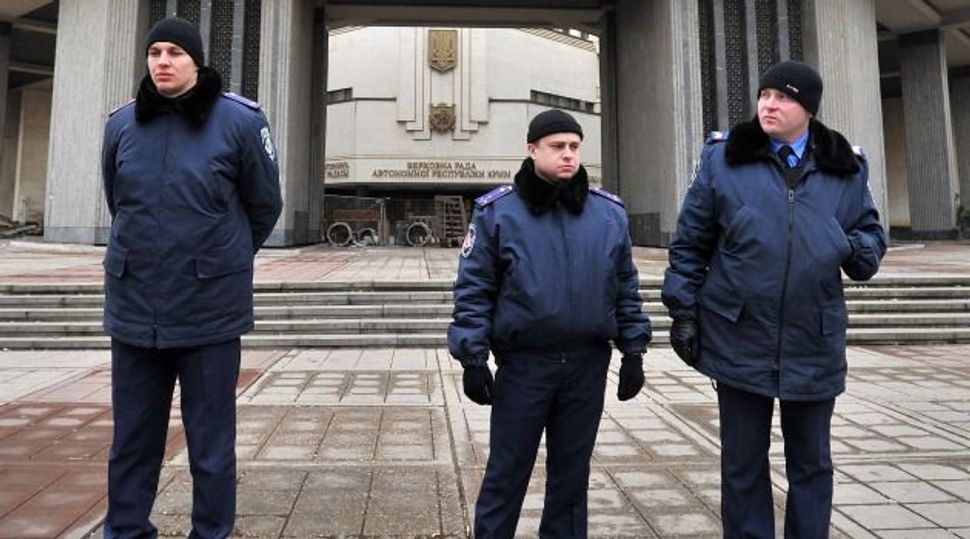 Unknown individuals painted swastikas and the phrase “Death to the Jews” on a synagogue in the Crimea region of southern Ukraine.

The graffiti was found Friday on the door and facade of the Reform Ner Tamid synagogue in Simferopol in the Crimean peninsula, the Russian-Israeli news site izrus.co.il reported.

Anatoly Gendin, head of the Association of Jewish Organizations and Communities of Crimea, told the news site that the perpetrators needed to climb a 2-meter wall to reach the building.

“Clearly, it was important for the anti-Semites to commit this crime. Since the crisis began prices went up by 30 percent, pensions aren’t being paid. As usual, Jews are blamed [for] these disasters and Jews are held responsible. I am afraid to think how this will progress,” he wrote in a statement sent to media by the World Union for Progressive Judaism.

The attack took place as Ukrainian troops reported takeovers of two airports in the Crimea region by forces they said were Russian. The Crimea region is heavily populated by ethnic Russians.

Protests against Ukraine’s elected president, Viktor Yanukovich, forced him to flee to the capital city of Kiev after scores died in bloody street clashes last week. The protest movement was spurred by his policy of privileging Ukraine’s ties to Russia integration with the European Union.

‘Death to Jews’ Scrawled on Synagogue in Crimea