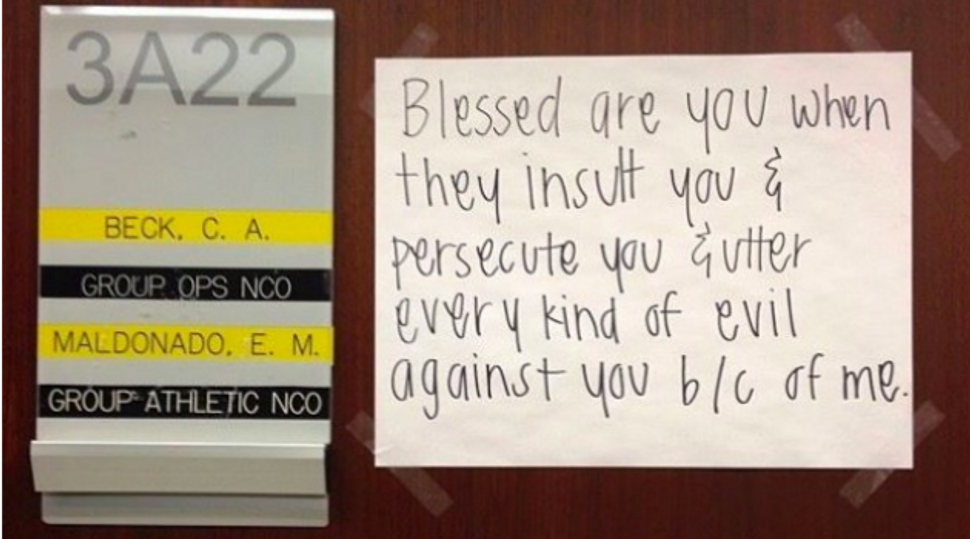 Controversy has erupted this week over the posting of Christian verses on the door of a cadet’s room at the Air Force Academy — with some calling the move an attempt to bully non-Christians and a violation of the separation of church and state.

More than 30 cadets complained after seeing the Bible verse, which many of them consider a sign of evangelical dominance at the college in Colorado Springs, according to Mikey Weinstein, director of the Military Religious Freedom Foundation.

The verse read: “I have been crucified with Christ therefore I no longer live, but Christ lives in me,”

Weinstein said he believes allowing the messages would amount to an endorsement of Christianity and would violate the separation of church and state.

“If they’re inside the room, that’s one thing,” he said.

The messages were taken down on orders of officials at the school, but new ones have since appeared, Weinstein said.

Others, however, have argued that such messages are protected by religious freedom.

Michael Berry of the Liberty Institute said that the removal of the verse was actually an infringement on religious freedom, theblaze reported.

Weinstein, whose group fights what it calls the spread of religious fundamentalism in the military, says that the recent messages reflect an environment of growing intolerance.

He said that 33 members of the Air Force Academy, most of them Christians, contacted him to report the incident.

“The environment is so incredibly hostile and toxic,” he said.

Weinstein plans to ensure that the Air Force Academy takes action against those responsible for posting scriptures outside their doors.